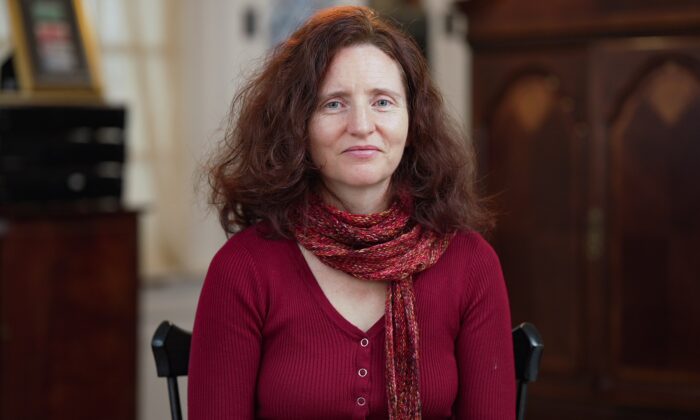 Gigi Foster, a professor at the University of New South Wales’ School of Economics and co-author of “The Great Covid Panic: What Happened, Why, and What To Do Next,” in Norfolk Historic District, Conn., on May 29, 2022. (Bao Qiu/The Epoch Times)
Australia

After weighing the various costs and benefits of the lockdowns imposed on Australian people during the COVID-19 pandemic, two Australian researchers found that financial and human costs incurred due to lockdowns exceeded the benefits 30 to 35 times.

The world has still not acknowledged that the human costs of lockdowns are gargantuan relative to the benefits that they could possibly deliver, even in an island nation like Australia, said Gigi Foster, a professor at the University of New South Wales’ School of Economics in Australia.

Before 2020, lockdowns of the healthy population were not part of the pandemic management plan in Australia because they were considered too costly, Foster told EpochTV’s “American Thought Leaders” program in a June 9 interview.

The standard approach in implementing public policies is to perform cost-benefit analysis to evaluate each policy, Foster said. This was not done for lockdowns either in Australia or in the United States, she added.

In August 2020, Foster and Sanjeev Sabhlok, then-economist with the government of Victoria in Australia, performed a cost-benefit analysis of lockdown policies (pdf) for consideration by the Victorian parliament.

“After tabulating and calculating, trying to quantify all the various dimensions of costs that lockdowns policies actually cause people to pay, we calculated that lockdowns are about 30 or 35 times more costly than what they could possibly have delivered in benefits,” Foster asserted.

An argument is often made that lockdowns will save the population until a vaccine is developed and that when people get the vaccine, in theory, fewer of them will die, Foster said. However, in Australia there are quite a lot of people dying from COVID-19 right now, she noted.

It is true that during the lockdowns and the border closures in Australia, deaths and even infections due to COVID-19 were reasonably low compared to the rest of the world, and the economic performance was also reasonably good for a couple of years, Foster said.

As an island nation, Australia has the capacity to close its borders, and seriously decrease the amount of virus that comes in, the professor said. But this is essentially starting on the path of withholding yourself from the rest of the world and letting the rest of the world pay the price of developing herd immunity and doing the technological innovations to fight the virus, she explained.

“What we basically did was delay the wave of deaths that we could have had, and gotten over with, in 2020,” Foster said. “And now we’re going right back into the same kind of economic distress that the rest of the world is now experiencing.”

“If you look right now at [COVID-19] infections and deaths in Australia, and even at the economic indicators, like inflation–it does not look good at all.”

The number of new CCP (Chinese Community Party) virus cases (commonly known as the novel coronavirus), as well as the number of COVID-19 deaths in Australia, show a relative increase at the beginning of 2022 in comparison with the prior two years, and they continue to stay on the relatively higher side, according to Worldometer.

Fiscal costs to support people who lost their jobs due to the lockdowns were not factored into the COVID-19 policymaking in Australia, Foster said.

The driving factor behind imposing lockdowns was how many people would have been saved from COVID-19 deaths, but the trade-off between avoided COVID-19 deaths and the number of people who lost their lives due to pandemic response policies should also be considered, the professor pointed out. An example of deaths due to these “draconian” policies “are people who should have gone to the hospital to get care for a stroke or heart attack or who had their cancer screenings missed,” she added.

“Public health should be about all of the public health, for all different dimensions of health.”

COVID-19 is a disease caused by the outbreak of the CCP virus.

Some may argue that lockdowns “delayed the onset of COVID and thereby enabled the Australian population to be exposed only to mainly a milder variant, when [people] are more vaccinated,” Foster said.

“But if we had taken an optimal policy response, where we protected the people who are actually vulnerable to this virus, significantly vulnerable, [such as] the older people, the people with comorbidities—which was clearly the right thing to do even in March 2020—then we would have had far fewer deaths than what we’ve had now.”

The lockdown policy impacted more severely poor families where children were out of school and did not have a computer for remote learning, Foster said. The families that had been already struggling in early 2020 because of any number of hardships, such as difficult relationships, substance abuse, being unskilled and having difficulty finding a job, kids who did not have enough space in the home to study–they were the ones who felt the impact of the lockdowns most, Foster explained.

“It’s not just the short term costs, which are gargantuan, but it’s also—you’re exacerbating the existing inequality in a society,” she said.

There are also costs of wearing masks such as ”a huge mountain of environmental waste” if masks are worn daily, as well as human costs, Foster said. Masks prevent people who are deaf or have difficulty hearing from recognizing what others are saying by looking at their lips and impede language acquisition of small children, she explained.

“There’s this staggering amount of cost that we have imposed on populations that really has not yet been reckoned with.”

Foster said she believes that the main fallacy of these models is that they focus only on the viral transmission, and disregard the cost of lockdowns or costs of mitigating the spread.

Models are also based on many assumptions which are “just judgment calls,” and they have been wrong in the past, Foster explained. “Previous epidemiological simulations have been wildly off and this time, not surprisingly, they were off again.”

It could be excusable in the first few months of the pandemic to base response policies on simulated models, but after the data about the spread of the virus and deaths started coming in, the policies should have been updated, Forest said.

She mentioned the spread of the virus on the Diamond Princess and Ruby Princess cruise ships, and said they offered a way to observe how many people would die from the virus in a closed environment.

“We could have learned so much from those if we would just look at the data,” she said. “But there was not any updating.”

Foster used only information from the real world to come up with the counterfactuals and all the estimates for her cost-benefit analysis of lockdowns, she said. “I was not relying on a simulated model. I was relying on what has happened in different places in the world with this virus.”

“Part of the draw of the model, the seduction of the model, is that it seems to be a way to simplify what is an incredibly complex reality, particularly now when we have this bombardment constantly with information through the internet, social media, everything.”

Foster also warned people against living in a fantasy world where one can simply press a pause button on an economy and when the pause is released all would be back to normal. “That’s not consistent with the way that the economic system actually works.”

After an economy is paused, people have to make choices as “they have to compensate for what’s been done to them,” Foster said. They may change the way they allocate their resources and how they interact in the marketplace; they may even change jobs, she explained.

When the economy is resumed it is not in the same place it was before. There are broken links and people and their lives have changed, Foster added.