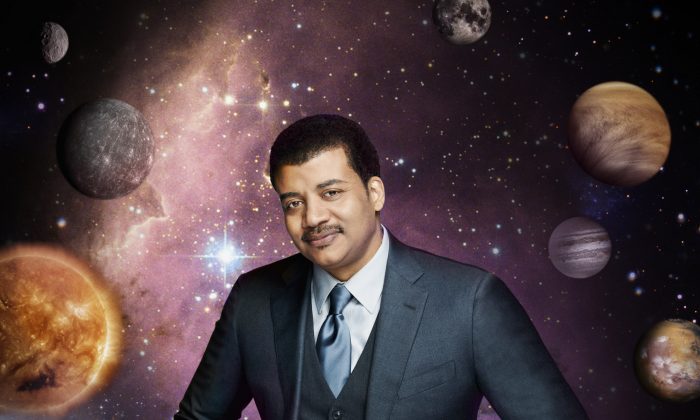 Astrophysicist Neil deGrasse Tyson’s smooth voice and cool manner steered the Ship of Imagination through the known history of the cosmos and through the development of modern science in the debut episode of “Cosmos: A Spacetime Odyssey” on Sunday.

Reviving the immensely popular show “Cosmos: A Personal Voyage,” hosted by the late Carl Sagan, Tyson has some big shoes to fill.

Episode 1, titled “Standing up in the Milky Way” begins with a promise. Tyson tells the audience he will explore everything we know from the “infinitesimal to the infinite,” taking us through universes smaller than atoms and other wonders of the cosmos.

He breaks up the known universe into various lines of our cosmic address. The solar system is one line; the Milky Way galaxy is another; the Virgo supercluster—a group of about 100 billion galaxies of which ours is but one— is the last known line of our address.

Skimming over Venus, we see the “runaway greenhouse effect has turned it into a kind of hell,” says Tyson. Understanding this effect on Venus was one of Sagan’s major contributions to science. Jupiter’s red spot, a hurricane three times the size of Earth, provides the first comparison by which we see our planet’s size diminishing in the ever-expanding view.

Beyond Voyager 1—the spacecraft that has traveled farther than any other launched from Earth—and beyond the cloud of comets that encircles our solar system, we enter “the deeper waters of this vast cosmic ocean.”

Seeing What We Couldn’t Before

On the subject of extraterrestrials, Tyson speaks of the possibility that life may exist outside our concept of life. “But what do we know about life?” he asked. “We’ve met only one kind before—Earth life.”

Our eyes have limited sight. Tyson shows that when we first started to view space in infrared, the kind of technology used in night-vision, we found way more stars and planets than we could see before.

The visuals are engaging, and even elegant in the way they flow. Tyson’s descriptions are even poetic at times; he describes the rogue planets detected by infrared as “orphans cast away from their mother stars during the chaotic birth of their native star systems.”

On the right is the Orion Nebula as seen with infrared, on the left is the same nebula without infrared. (NASA/JPL-Caltech/Univ. of Toledo/NOAO)

The bubble theory has its place in this episode. The screen pans out to show our universe as a bubble surrounded by many other bubbles—so many, in the end, that each universe is like a droplet of water in a massive, rushing waterfall.

“Feeling a little small?” asks Tyson. “We may just be little guys living on a speck of dust afloat in a staggering immensity.”

This is where he takes us back to Earth.

An animated episode tells the story of Giordano Bruno, a 16th-century friar who said the sun is simply a star like so many others. He burned at the stake for his heresy.

A thread that ran through the episode was the idea that science has been wrong before—that the scientific community has been so certain of its knowledge that it would shun bold individuals who proposed different perspectives.

Will we see Tyson propose any bold or new perspectives throughout the series? Thus far, it all seems to fit fairly well within the bounds of conventional scientific understandings.

Bruno had a vision, a startlingly accurate vision of the structure of the cosmos. He was not a scientist. Tyson calls Bruno’s understanding and vision a “lucky guess.” He falls short of considering Bruno’s ability to accurately understand the cosmos through a spiritual vision an ability that may relate to the little-understood wonders of the human mind.

File photo of a calendar. (Shutterstock)

Another historical perspective fills the second part of the cosmic saga. The history of the known universe is put in terms of a calendar year. Jan. 1 is the Big Bang, Dec. 31 is now. Every month is a billion years and every day is 40 million years.

The Big Bang is presented like a scene from an action movie, with Tyson facing the huge explosion, a silhouette with his arms heroically outstretched.

Tyson wrapped up the episode with thoughts of Sagan. Tyson first met Sagan in 1975. Sagan, already famous, took the time to meet with this 17-year-old from the Bronx who had aspirations of becoming a scientist. They spent a Saturday afternoon together in Ithaca, N.Y. Sagan signed a book for Tyson with the message, “For Neil, a future astronomer.”

Forty years later, Tyson has taken the torch from Sagan and continued on a mission to bring scientific exploration to a broad audience. He closed the first episode with the words, “Now, come with me, our journey is just beginning.”

Carl Sagan, a co-founder of The Planetary Society, at the incorporation of the Society in 1980. (NASA/JPL)

Nat Geo will rebroadcast the episode on Monday, March 10 at 10 p.m. ET with extra content. The next episode, “Some of the Things That Molecules Do,” will air on March 16, 2014 at 9 p.m. ET in the United States across 10 networks of 21st Century Fox. This includes Fox, FX, FXX, FXM, Fox Sports 1, Fox Sports 2, National Geographic Channel, Nat Geo WILD, Nat Geo Mundo, and Fox Life. It will air in other countries on Fox channels and National Geographic Channels International.