Cory Morgan: Smith Has Many Challenges Ahead of Her, but She Continues to Surprise 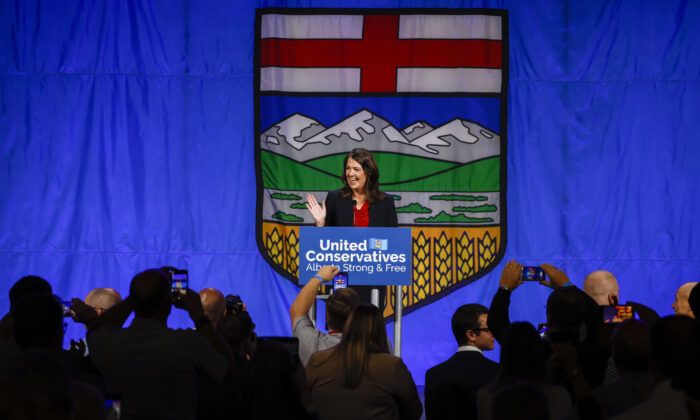 Danielle Smith celebrates after being chosen as the new leader of the United Conservative Party and next Alberta premier, in Calgary on Oct. 6, 2022. (The Canadian Press/Jeff McIntosh)

It took over 10 years, a term as the leader of Alberta’s official opposition, a politically disastrous floor-crossing, and a long time in the political wilderness, but Danielle Smith has finally achieved her goal of becoming Alberta’s premier.

Smith’s work is far from done and she still has a tough and bumpy road ahead of her. The United Conservative Party (UCP) has some serious internal rifts, Smith has some big and difficult promises to fulfill, and she is facing what is sure to be a hard-fought general election in seven months.

While her party has the word “united” right in its name, it is anything but. The UCP is the result of an amalgamation between the Progressive Conservative (PC) and Wildrose Parties under Jason Kenney that happened only five years ago. Political rivals on the right sheathed their swords and created a united front to defeat the NDP government in Alberta’s 2019 general election. The political rivalries didn’t end with the merger, however, and they fostered the internal party division that eventually led to the ousting of party leader Jason Kenney. Those party factions are still in play today, and Smith is going to have to get them under control or the party could fracture again.

While there were seven entrants in the UCP leadership race, there were only really two top contenders for the title: Travis Toews and Danielle Smith. Toews was Alberta’s finance minister under Kenney. While Toews has solid conservative credentials, he was viewed as the establishment candidate representing the PC wing of the party. Even though Smith was absent from party politics for nearly eight years, she became the representative of the Wildrose faction of the party. Quite a feat considering how she nearly destroyed the party when she led a floor-crossing in 2014.

Smith doesn’t have the luxury of a strong first ballot mandate in winning the party leadership, like Poilievre did at the federal level when he took over 68 percent of the vote of the membership. It took six rounds of balloting before Smith crossed the threshold with 53.8 percent of the vote. Toews came in with 46.3 percent. Nearly half of the party membership didn’t select Smith as the first or second choice on their ballots, and she now has to win them over.

Along with the party members, Smith has a fractious party caucus to deal with. Travis Toews along with several UCP caucus members all publicly vowed not to support Smith’s proposed Sovereignty Act if it comes to the legislature. The Sovereignty Act was the prime plank in Smith’s campaign, and she is remaining steadfast in her promise to make it the first order of business in the next legislative session. If her bill fails to pass due to a caucus revolt, her party leadership could fall apart just months into its mandate. Smith will have to engage in some heavy caucus diplomacy to ensure members support the bill when it’s tabled in the legislature.

An advantage and disadvantage of Smith’s Sovereignty Act is that it hasn’t been written yet. Smith has made broad statements on what the bill is intended to do, while opponents have speculated negatively on what the bill can or can’t do, but the nuts and bolts of the legislation haven’t been drafted yet. If Smith can draw in enough caucus participation in drafting the bill, she could find consensus and create some outs for caucus members who already painted themselves into a corner in vowing to oppose the bill.

Even if it hasn’t been drafted yet, the Sovereignty Act is contentious in principle alone. It is the most aggressive legislation pursuing provincial autonomy ever seen west of Ontario and has ruffled many feathers. While the bill proposes nothing that Quebec isn’t already doing, it’s always somehow considered extreme when western provinces try to stand up against Ottawa. That’s just the nature of Canada these days. Smith will be painted as a separatist by opponents, and it will be a tough label to hide from, even if it’s baseless. She can’t drop the bill or the members who just elected her will revolt. They are not in the mood for compromise.

With a prickly caucus and a controversial platform, Danielle Smith is heading for what will surely be one of the most heated provincial elections in Alberta’s history. Some people are saying it’s impossible for her to win with such a mandate and carrying such political baggage. A year ago, I would have been one of those people. I would have said there was no way Smith could revive her political career at all, much less become premier. I obviously would have been dead wrong.

Smith has many challenges ahead of her but it would be a grave mistake to underestimate her. She continues to surprise.

Cory Morgan
Cory Morgan is a columnist based in Calgary.