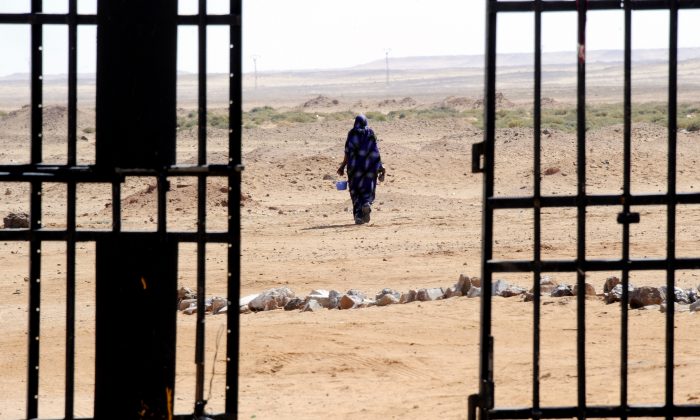 A Sahrawi woman walks in the desert near the Western Sahara refugees camp called "27 February" in Tindouf on March 1, 2011. Western Sahara is a former Spanish colony which was annexed in 1975 by Morocco. The Polisario Front, backed by Algeria, wants independence for the territory on the west African coast. (Dominique Faget/AFP/Getty Images)
International

The Swedish parliament has actually voted in favor of recognizing Western Sahara, but at the time the then liberal-conservative government refused to go along, citing larger issues like Sweden’s relations with Morocco and other countries.

But this time was different. Both the parties (the Social-Democrats and the Green Party) in the present ruling minority government, have binding party-congressional decisions to recognize an independent Western Sahara. The reasons cited for not recognizing independence, despite earlier decisions to do so, were that the issue had to be “studied more” and that this decision should be seen as a postponement more than a final one.

There are a number of criteria that must be fulfilled for Sweden to recognize a new independent country, and a key factor is that the new government has control over its territory.

There are a number of criteria that must be fulfilled for Sweden to recognize a new independent country, and a key factor is that the new government has control over its territory. That is clearly not the case with Polisario and Western Sahara, but interestingly, that was not given as a reason for the decision not to recognize. This is a general principle and thus carries some weight internationally, but in this instance this principle was not invoked.

And neither was this principle a problem when the same government, shortly after having formed a new administration after the elections in September 2014, recognized the state of Palestine. The Palestinian Authority (PA) doesn’t control its territory either and is even divided into two entities in the West Bank and in Gaza.

That the Swedish government decided against Polisario has obviously more to do with the wish for a seat in the Security Council, for which Sweden hopes to get Arab and African votes.

That the Swedish government decided against Polisario (for now at least) has obviously more to do with the wish for a seat in the Security Council, for which Sweden hopes to get Arab and African votes. Another issue was of course the problem with Moroccan street-kids in Sweden (mainly in Stockholm and Gothenburg), who lately have been a growing law-enforcement issue in Sweden. It’s hardly a secret that Sweden needs good relations with Morocco to solve this issue.

In addition, there were some other issues that weren’t discussed in the decision either. These were also issues of importance on a general level, such as the increasing recruitment of violent Islamist organizations in Polisario camps in Tindouf in Algeria and the widespread corruption and embezzlement by high-ranking Polisario members in collusion with Algerian authorities.

All Intelligence agencies in the Sahel area are aware of the growing problems with militant Islamism in the region. And even the Algerians have acknowledged that these groups (such as Al Mourabitoun, for example) have been stepping up efforts to recruit in the Polisario camps of Western Algeria. This has never really been addressed by Sweden, and if the issue of Polisario is taken up again (by this or any other administration), one hopes that this issue will be seriously discussed before any decision is taken.

This is obviously an issue with the Palestinians as well, where not only Hamas (which rules over the Gaza Strip and is a designated terrorist organization by both the United States and the EU) but also individuals in the PA have been involved in incitement and praising the many killings of Israelis by Palestinians (mainly by knifings and vehicular attacks).

Finally, the issue of the widespread corruption must also be put on the table. In 2015, the EU anti-fraud office (OLAF) released a damning report on corruption and embezzlement by Polisario representatives who, in cooperation with Algerian authorities, for several years had lied about the true figures of refugees in the Tindouf camps to get more aid. The Polisario representatives had stolen foodstuff intended for the camps and sold it at inflated prices to the refugees as well as given inferior quality stuff to the camps.

Polisario representatives, in cooperation with Algerian authorities, for several years had lied about the true figures of refugees in the Tindouf camps to get more aid.

This issue has not been addressed either, by, for example, pressuring Polisario to get its act together and make serious attempts to clean up. This is obviously not easy when Algeria, in effect, decides what happens in the camps and gives very little room for independent decision-making by Polisario. Nevertheless, this is another point of contention that keeps bedeviling political movements dependent on foreign powers, such as Polisario and Algeria, and that needs resolving before any long-term solutions can be found.

Here, as well, is a parallel situation with the Palestinians whose leadership from Arafat to today (with the noteworthy exception of Salam Fayaad as premier) has been the epitome of corruption.

It is a sad fact that a major reason this problem has been allowed to fester for so long is in no small part because countries like Sweden never really confronted the movements being supported on these issues, thus prolonging a severe obstacle to real conflict resolution, whether full independence or something else. And this goes for Polisario as much as the Palestinian movement.

But by neglecting the above-mentioned issues, such as control over territory, corruption, and terrorist violence, Sweden and other countries have actually undermined some very basic and important principles that are intended as safeguards against hasty decisions that might backfire. This is doing a disservice to the very honorable aim of helping and aiding independence and strengthening peace and security as an outcome of such endeavors.

Magnus Norell, Ph.D., is an adjunct scholar of The Washington Institute and a senior policy adviser at the European Foundation for Democracy (EFD) in Brussels. Previously, he was an analyst for the Swedish Secret Service and Military Intelligence, and eventually project leader and senior analyst at the Swedish Defense Research Agency, and a senior research fellow at the Swedish Institute for International Affairs in Stockholm.