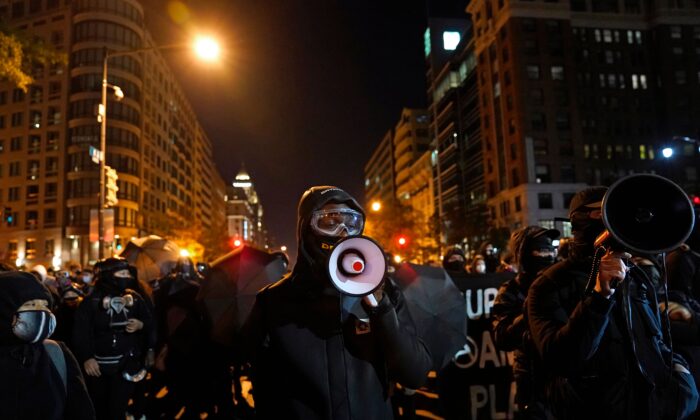 Antifa demonstrators in their typical black bloc attire protest on election night near the White House in Washington on Nov. 3, 2020. (Alex Edelman/AFP via Getty Images)
Viewpoints

Coronavirus Ushers In an Unconstitutional Hell for America

Thanks to the dreaded COVID-19, it’s goodbye Thanksgiving and, soon enough, farewell Christmas. And after that, who knows?

Having discovered that Americans have lost their spines and are now easily penned inside their homes like two-legged sheep, the petty potentates who rule—not govern, rule—far too many states and municipalities have concluded that we will never fight back, never resist, and never reject their latest whimsical edicts.

For proof, look no farther than California, where 41 of the state’s 58 counties have just been returned to most-restricted status, and a statewide curfew is now being bruited in Sacramento. The state is “pulling an emergency brake,” as CCP virus “cases” rise, said Gov. Gavin Newsom, who recently attended a pricey private birthday party at the exclusive French Laundry restaurant in the Napa Valley, violating his own Caligulan guidelines.

There are vague promises that things might begin to open again next year, but don’t hold your breath.

“Two weeks to slow the spread” and “15 days to flatten the curve” have long since morphed into a semi-permanent nanny state, in which the very act of slowing and flattening ensures that the virus will go on indefinitely by guaranteeing a continuous stream of new “cases” with which to frighten the public and increase government power.

In defiance of all previous medical experience, the COVID-19 “pandemic” has muzzled the population with bank-robber masks, driven families asunder, forced elderly couples to die apart, punished schoolchildren with the false promise of “remote learning,” made Americans eye each other with suspicion and sidle away, and created a near-Stasi level of rats and snitches only too happy to inform on their fellow citizens.

It’s also killed the hospitality industry, the airlines, and commercial real estate—all in brazen violation of the Constitution’s explicit guarantees of freedom of speech, assembly, and religious observance.

It’s been a monstrous disgrace, made even worse by its supine acceptance. But even more dire consequences have followed the arrival of the Chinese Communist Party on our shores. In short order:

Masks became normalized, even mandated, thus allowing the brutal, cowardly thugs of Antifa and Black Lives Matter “activists” to go about in public in ninja mufti, faces concealed in violation of innumerable local ordinances. Once, the wearing of a concealing mask was practically prima facie proof of criminal intent, but now, thanks to the irresponsible and self-aggrandizing Dr. Anthony Fauci and other “experts,” the lack of a mask signals an inability to accept authority and perhaps also a willingness to expel the phantom virus into the faces of the innocent.

With the public rise of the neo-fascist left in the wake of the death of George Floyd in Minneapolis, urban disorder became mainstreamed, justified as it was by calling it “mostly peaceful” protest against the United States and its form of government. Even as private gatherings were being banned, thousands gathered in the streets to demonstrate against the U.S. Constitution and celebrate President Donald Trump’s apparent electoral defeat.

Indeed, “Black Lives Plaza,” on one of the most expensive blocks in Washington, violates private property and civil rights within sight of the White House.

Watching the videos of patriotic Americans who had gathered in Washington over the weekend to show support for Trump’s efforts to legally fight clear vote fraud in the recent election—as is his constitutional right—and who were then set upon, sucker-punched, and otherwise assaulted by the feral minions of Antifa and Black Lives Matter within sight of the White House, was sickening and enraging.

Once actual peaceful protest had become essentially forbidden, the red-diaper baby media was free to shed its skin-suit of journalistic “objectivity.” They enthusiastically joined the leftist cadres in its open loathing of Trump and all that he symbolizes, and renew its attack on the Constitution, including among other things, the Electoral College, the Senate, and the Bill of Rights.

All in the name of a more “honest” journalism adhering to a “higher loyalty,” of course.

Indeed, The New York Times—Pravda West—in the run-up to the election informed the nation via Twitter that it would be the media that would call the winner of the 2020 election, even before the votes were counted, certified, and sent to the Electoral College.

“The role of declaring the winner of a presidential election in the U.S. falls to the media,” the Democrat propaganda sheet masquerading as a newspaper proclaimed, falsely. It later deleted the tweet and issued a sheepish “apology” for “referring imprecisely to the role of the news media. … [It] projects winners and reports results; it does not declare the winner of the election.”

Of course, that was a bald-faced lie, as well. In fact, insofar as the media is concerned, it does declare the winner—and its word goes. Why else is an often-masked Joe Biden now claiming the nonexistent “Office of the President-Elect”? The media couldn’t wait to declare Biden over the top, even though the election is now in its constitutionally permitted disputation phase, and doesn’t go to the Electoral College until Dec. 14.

Lastly, the dreaded COVID-19 occasioned a wholesale “emergency” rewriting of voting laws, removing essential safeguards in the name of “safety” and thus permitting a host of outcome-altering refinements, including a record number of mail-in votes whose provenance is often unprovable, early voting, late voting, and last-minute registration and voting.

During the counts in crucial swing states, tallies were suddenly halted for a couple of hours in the wee hours as the Democrat urban-machine apparatchiks calculated how many manufactured votes were needed to overtake Trump’s lead and then, two hours later … they appeared, courtesy of foreign-made voting machines with hidden algorithms.

All because of the CCP virus.

For unless something dramatic happens, the left will never, ever, ever let us go. Thanks to the hysterical overreaction to the novel coronavirus, the weaponizing of it by the Democrat Party in order to change election laws and thus harvest millions of likely fraudulent mail-in votes in key swing states, and a leftist media that speaks with one voice as it gaslights the population with the party line, we are now all living in the unconstitutional hell of the neo-Marxists’ “new normal.”