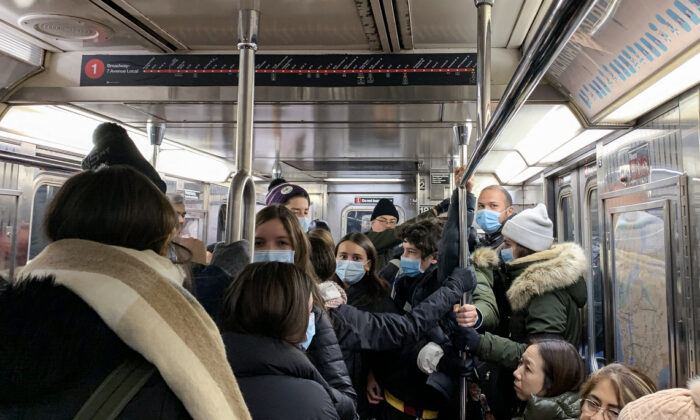 The outbreak of the Wuhan coronavirus, which was recently labeled a pandemic by the World Health Organization (WHO), has highlighted the longstanding issue of America’s dependence on China for medical supplies.

President Donald Trump is expected to announce a new executive order aimed at ensuring medical supplies and pharmaceuticals are made in America, in response to the spread of the virus.

While a White House spokesperson didn’t respond to a request for comment by The Epoch Times about the order, an official statement from Sen. Marco Rubio’s (R-Fla.) office appeared to confirm its existence, as did media reports.

The announcement comes as the Chinese Communist Party-run Global Times published an article saying that China “could ban the export of face masks and other medical gear to America which are in acute shortage,” over recent actions by the United States to restrict market access to Chinese telecommunications company Huawei, which was founded in 1987 by a former People’s Liberation Army engineer.

The United States is “dramatically dependent” on China for medical supplies that include among them masks, scans, prescription drugs, and their ingredients, according to Rosemary Gibson, a senior adviser at the Hastings Center, a bioethics research institute, and the co-author of “China RX: Exposing the Risks of America’s Dependence on China for Medicine.”

“Our dependence is a risk to our national security,” she told The Epoch Times. “For prescription drugs, 90 percent of the core ingredients, the chemicals, and other ingredients depend on China.”

Gibson said the dependence on China is a huge risk because it exposes the lack of availability of certain medicines that are crucially needed in the United States, especially antibiotics. Doctors and nurses could also be at risk if there’s a shortage of masks and protective gowns.

Last week, the Trump administration granted exemptions from tariffs on medical products imported from China, which include protective masks and medical gloves.

The United States is ramping up efforts to quell the spread of the virus, which is now confirmed in over 1,300 people across the country, according to data compiled by the Center for Systems Science and Engineering (CSSE) at John Hopkins University. At least 38 people have died from the virus, as of press time.

Rubio praised the administration’s expected executive order, a day before chairing a March 12 hearing titled, “The Coronavirus and America’s Small Business Supply Chain.” He serves as chairman of the Senate’s Committee on Small Business and Entrepreneurship.

“The coronavirus outbreak has been a wake-up call that we must combat America’s supply chain vulnerabilities and dependence on China in critical sectors of our economy,” Rubio said in a statement.

“The Trump Administration’s forthcoming Executive Order is a very strong first step toward increasing domestic production by enforcing Buy American requirements for pharmaceuticals and medical supplies, as well as fast-tracking FDA approval of critical products impacted by the coronavirus outbreak’s strain on the supply chain.”

Gibson said the reliance on China for medical supplies stems from the communist regime’s engagement in a “strategy of illegal trade practices to fix prices to dump products [and] medicines on the global market at below-market prices.”

“They subsidized their domestic companies, they don’t want to import our products and so that has driven out western companies,” she said. “It’s not just lower costs, it’s market manipulation.”

Details of what the executive order would entail remain unclear. Trump announced late on March 11 that the United States will impose a 30-day travel ban on travelers from Europe amid coronavirus concerns, with exemptions for the United Kingdom and Ireland.

Robert J. Bunker, adjunct research professor at the U.S. Army War College’s Strategic Studies Institute, told The Epoch Times it would be a “massive strategic mistake for the United States to allow itself to continue to be vulnerable to Chinese ‘pharmaceutical blackmail’ potentials.”

“The communist regime could use such leverage for international gains such as further cracking down on Hong Kong or isolating Taiwan by threatening to withhold pharmaceutical deliveries to the United States if its demands are not met,” he said via email.

The State Department is also urging Americans to think carefully before traveling outside the country because of the spread of the coronavirus, which causes the disease COVID-19. The department “advises U.S. citizens to reconsider travel abroad due to the global impact of COVID-19,” it said in an updated global health advisory on March 11.

In multiple states, people are also being cautioned against attending major gatherings. Public health officials in California are advising against gatherings of 250, and in New York state, public gatherings of 500 people or more are being banned.

On March 12, Vice President Mike Pence said officials are expecting to see thousands of cases of coronavirus in the United States. Trump also announced on March 11 that he will instruct the Treasury Department to allow individuals and businesses negatively affected by the coronavirus to defer their tax payments beyond the April 15 filing deadline.