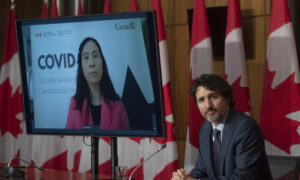 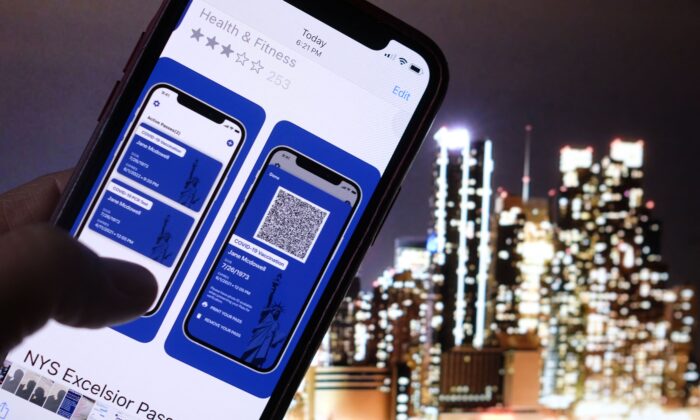 A person looking at the app for the New York State Excelsior Pass in Los Angeles on April 6, 2021. (Chris Delmas/AFP via Getty Images)
WORLD

‘Coronapass’ Vaccine Passport System to Be Imposed on Cyprus

The Cyprus government announced a controversial new measure that would reopen businesses and return some liberties to the island nation’s citizens by introducing a “Coronapass” system.

The European country’s cabinet decided on May 5 that most businesses will be allowed to reopen with the pass. Residents, upon showing their Coronapass, would be authorized to enter restaurants, churches, sports games, gyms, shops, and other venues starting May 10, but a night curfew will remain, Cyprus Mail reported.

The Coronapass indicates proof of a negative test for COVID-19 within the past 72 hours, vaccination three weeks prior, or having been infected with the virus within the past six months.

“Lockdowns are not the solution; we cannot keep the economy and society shut for too long,” said Health Minister Constantinos Ioannou, the Financial Mirror reported.

“We need to cooperate, learn to live in a new reality, follow the measures and stay safe. Otherwise, we will constantly have the same problems.”

Beauticians and hairdressers won’t need the pass to operate, and meetings in public areas such as parks and beaches will be permitted as long as the number is fewer than 10, regardless of age, with no need for a pass.

The Coronapass will be required at religious venues, dinners, weddings, and other outdoor receptions with a 200 limit for seated attendees from May 17, and on June 1, events will be allowed indoors, as long as people show their pass.

Private businesses can operate with 30 percent of their staff’s attendance, and 50 percent on May 17, if they have the pass.

Theaters and Cinemas can run with a maximum of 50 people in attendance until May 17, after which 30 percent of their capacity will be permitted indoors, under the same condition.

The previous 9 p.m. to 5 a.m. curfew was imposed due to an outbreak of a British strain of the CCP virus, according to The Mayor.

With the new regulations, the curfew will be from 11 p.m. to 5 a.m., exempting medical emergencies and workers who can present a “Confirmation for Employee’s Movement” form.

Residents in Cyprus have experienced some of the most draconian lockdown measures. Previously, they had only been allowed to leave their homes once a day after sending a text message, unless they were visiting a vaccination center. After the Coronapass system is implemented, they won’t need to send an SMS to go out.

The Cypriot government is close to getting 60 percent of the population vaccinated by the end of June.

People cannot obtain a Coronapass through antibody tests or self-test kits. Ioannou declared that the only way to register is to be confirmed by a government health official or authorized pharmacy, Knews reported.

The new restrictions are being condemned over their unconstitutionality and private data issues.

The Cyprus Bar Association, a group of more than 2,700 advocates, called the idea unconstitutional.

The association’s personal data commissioner asked to be rigorously briefed over the measure’s development ahead, according to In-Cyprus.

Averof Neophytou, president of Democratic Rally, the governing party in Cyprus, conveyed disapproval of the measure, saying that the principle of proportionality was to be observed.

Ioannou said, “Let the courts decide whether the CoronPass is unconstitutional or not.”