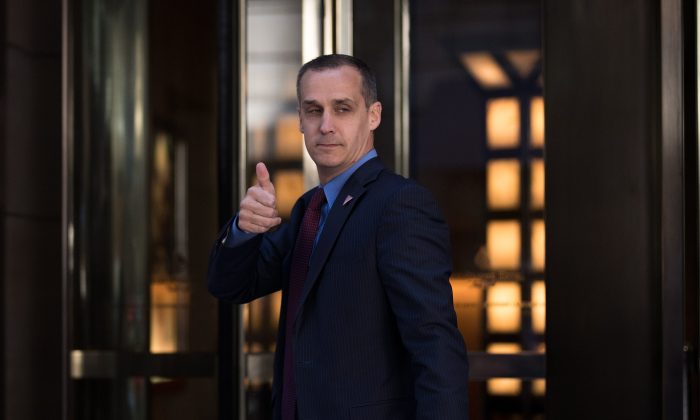 Corey Lewandowski, campaign manager for Donald Trump, gives the thumbs up as he leaves the Four Seasons Hotel after a meeting with Trump and Republican donors, June 9, 2016 in New York City. (Photo by Drew Angerer/Getty Images)
2016 race

Donald Trump let go controversial campaign manager Corey Lewandowski on Monday, and by Thursday CNN announced that it had hired him as a political commentator.

After an interview with CNN reporter Dana Bash on Monday, Lewandowski went straight into a long meeting in the office of CNN executive Barbara Levin, Vice President of Communications, reported Politico.

It’s a salaried position and will make Lewandowski exclusive to CNN, effective immediately. His first appearance will be Monday, June 27 on the show “New Day.”

In speaking to Bloomberg Politics on “With All Due Respect,” Donald Trump Jr. said that firing Lewandowski was a “right and appropriate” decision, but maintained that the final decision was left to the presumptive Republican nominee.

Talking to The Associated Press, Lewandowski deflected any criticism of his approach, pointing instead to campaign chairman Paul Manafort.

“Paul Manafort has been in operational control of the campaign since April 7. That’s a fact,” said Lewandowski, declining to elaborate on his dismissal.

The former campaign manager has been with the campaign since its beginning, although his leadership has been plagued with controversy.

Lewandowski was charged with simple battery—later dropped–against Breitbart reporter Michelle Fields in March. Trump kept Lewandowski on at the time and defended him, even as people called for his removal after the battery charges were made public.

Lewandowski also had a run in with CNN reporter Noah Gray, telling campaign spokeswoman Hope Hicks at a rally that Gray had to “get back in the pen or he’s [expletive removed] blacklisted,” according to a report by the Washington Post.

Gray also took a video of an incident when Lewandowski told him: “Inside the pen, or I will pull your credentials. Media goes in the pen.”

.@CLewandowski_ :”inside the pen or I pull your credentials” as I film crowd reax to protestor this evening pic.twitter.com/Gkb2jpC6CY

A polarizing figure, Lewandowski encouraged the strategy: “Let Trump be Trump.” The strategy proved successful during the primary season, but became less popular as Trump moved into the general election and his ratings dropped.

CNN has been one of the media targeted most vocally by Trump. On the same day that CNN announced that Lewandowski would join the network, Trump called CNN the “Clinton News Network” for being biased.

Here is another CNN lie. The Clinton News Network is losing all credibility. I’m not watching it much anymore. https://t.co/pNSgSjD5gW

While Trump decries CNN for its bias, it is actually one of the only networks with Trump supporters on the payroll.