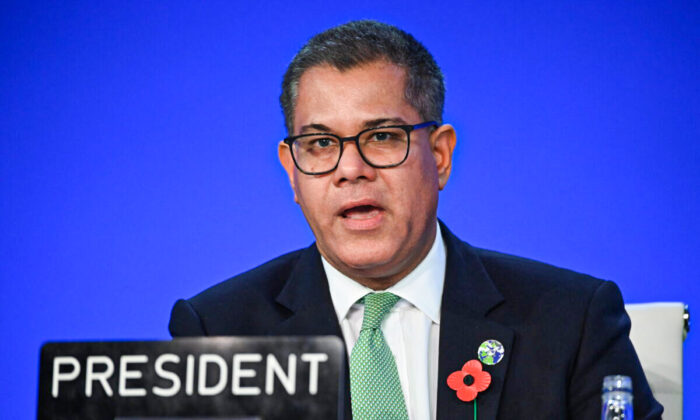 Nearly 200 countries attending the COP26 climate talks in Glasgow, Scotland, agreed on a global climate deal on Nov. 13, following last-minute changes pushed by China and India that watered down language about the use of coal power.

After two weeks of talks, the 197 nations didn’t veto last-minute changes to revise the final text of the deal, named the Glasgow Climate Pact, to “phase down” rather than “phase out” unabated coal.

Unabated coal power is the burning of coal without carbon capture and storage. An earlier draft of the agreement called to phase out all coal as an energy source.

The change in wording was also backed by other nations, including Iran and South Africa.

“May I just say to all delegates, I apologize for the way this process has unfolded and I am deeply sorry,” COP26 Conference President Alok Sharma told the assembly after he heard representatives from Switzerland, the European Union, and small island states express objections over the last-minute changes he approved before they had a chance to review them.

Sharma acknowledged that some of those nations had compromised on their own demands in the hopes of securing the outlined deal.

“I also understand the deep disappointment, but I think, as you have noted, it’s also vital that we protect this package,” he added moments before banging down the gavel on the deal.

The “phase out” wording had weathered four different drafts, but the Chinese delegation didn’t support the language, The Times reported. The United States ultimately brokered the deal with China and India to soften the wording, according to the outlet.

U.S. climate envoy John Kerry told a press conference after the adoption of the Glasgow Climate Pact, “You have to ‘phase down’ coal before you can ‘end coal.'”

“We are, in fact, closer than we have ever been before to avoiding climate chaos and securing cleaning air, safer water, and healthier planet,” he said.

The agreement comes more than a week after Xinhua News Agency, a mouthpiece of the Chinese Communist Party, touted that China had “hit a historic high” in its daily coal production.

India’s environment and climate minister, Bhupender Yadav, told Reuters that the revision was needed to reflect the “national circumstances of emerging economies.”

“We are becoming the voice of the developing countries,” he said, adding that coal had been “singled out” during the COP26 talks, while there was no similar call to phase out oil or natural gas.

He also claimed that “unsustainable lifestyles and wasteful consumption” are at the root of the climate crisis.

“The world needs to awaken to this reality. Fossil fuels and their use have enabled parts of the world to attain high levels of wealth and wellbeing,” he said.

The Glasgow Climate Pact is the first global climate pact in which nations have explicitly agreed to reduce the use of coal.

Nations at the COP26 summit also agreed on rules for international trading of carbon credits and to end “inefficient” fossil fuel subsidies, as well as have countries with higher carbon emissions commit to submitting stronger targets to cut emissions by the end of 2022. The pledges are in the spirit of limiting global temperature rise to the IPCC-recommended 1.5 degrees Celsius above pre-industrial levels—the tougher threshold set by the IPCC modeling used in the 2015 Paris Agreement.

Some researchers say that at the current rate of emissions, if countries don’t take further action, global temperatures may rise by 2.4 degrees C by the end of the century.

Ahead of the summit, the U.N. had set three criteria for success—none were achieved. The criteria included pledges to halve carbon dioxide emissions by 2030, $100 billion in financial aid from rich nations to poor, and ensuring that half of that money is directed to helping the developing world adapt to the worst effects of climate change.

China and the United States did on Nov. 10 issue a joint statement promising stronger cooperation on climate change in the next ten years. No specific targets were named.