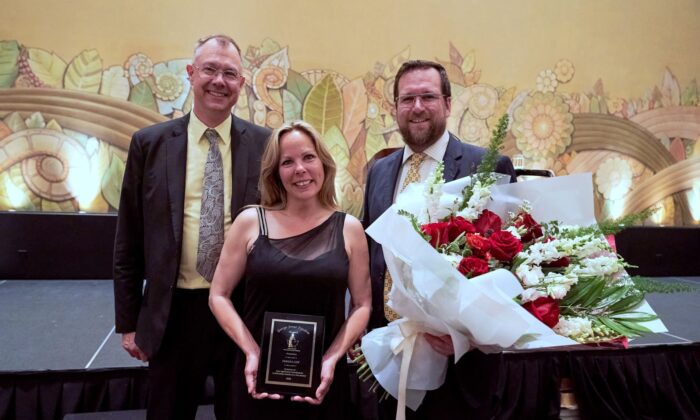 Freedom Convoy organizer Tamara Lich was awarded the annual George Jonas Freedom Award by the Justice Centre for Constitutional Freedoms at a ceremony in Toronto June 16.

A sold-out audience paid $150 to $500 to attend the event, which included a reception, dinner, the award presentation, and a keynote address from columnist and former national radio host Rex Murphy.

“Ms. Lich inspired Canadians to exercise their Charter rights and freedoms by participating actively in the democratic process, and took the initiative to help organize a peaceful protest and serve as one of its leaders, the Justice Centre wrote in an online post regarding Lich’s selection in April.

“The resulting peaceful protest in Ottawa awakened many Canadians to the injustice of Charter-violating lockdowns and mandatory vaccination policies. Ms. Lich has suffered for the cause of freedom by spending 18 days unjustly jailed, and exemplifies courage, determination and perseverance.”

On February 17, 2022, Lich was charged with counselling to commit mischief and obstructing police, among other charges. Just one day prior, Ontario Superior Court Justice Hugh McLean said Lich and other defendants in a civil action to stop honking in downtown Ottawa were “at liberty to engage in a peaceful, lawful and safe protest.”

Lich was released on bail after 18 days on condition she does not use social media or protest against vaccine mandates and lockdowns. Her conditions were appealed, and hearings were held on her bail May 19 and 20. Assistant Crown Attorney Moiz Karimjee argued that Lich’s pending acceptance of the award amounted to a public expression of “support” for the convoy, and was therefore a breach of bail conditions.

However, in a decision released May 25, Justice Kevin Phillips of the Ontario Superior Court ruled otherwise.

“I accept Ms. Lich’s evidence that she saw no connection between her release terms and the acceptance of an award meant to celebrate her advocacy of constitutional freedoms as she and others understand them,” he wrote.

“No court would ever seek to control the possession or manifestation of political views. The courts are not a thought police. We seek only to control conduct to the extent that certain behavior will violate or likely lead to violation of the law.”

Even so, Phillips reaffirmed Lich’s ban from posting on social media.

The award ceremony is named in honour of the late George Jonas, who died in 2016. Jonas was born in communist Hungary in 1935 but later became a renowned Canadian author, poet, and columnist who emphasized the importance of freedom.

In 2021, the award was presented at an online ceremony to all Canadians resisting unconstitutional lockdowns, who the Justice Centre called “Canada’s Freedom Fighters.” The Zoom event featured speeches by Dr. Jay Bhattacharya and Dr. Francis Christian. The Society for Academic Freedom and Scholarship won in 2020, journalist Christie Blatchford in 2019, and author Mark Steyn in 2018.

Drew Barnes, MLA for Cypress-Medicine Hat in Alberta, congratulated Lich on Twitter, saying, “Your courage, skill and principled stand for freedom, liberty and elected govt accountability made you the right choice!”

Similar Justice Centre ceremonies for Lich will be held in Vancouver on July 13 and Calgary on Aug. 11.