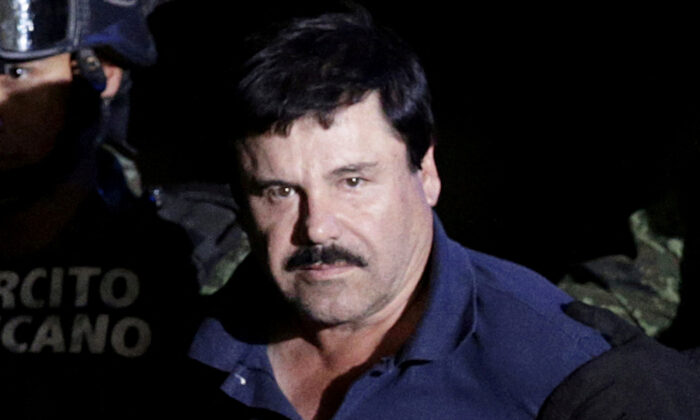 Recaptured drug lord Joaquin "El Chapo" Guzman is escorted by soldiers at the hangar belonging to the office of the Attorney General in Mexico City, Mexico, on Jan. 8, 2016. (Henry Romero/Reuters)
US News

The 2nd U.S. Circuit Court of Appeals in Manhattan also rejected several other arguments Guzman raised in seeking a new trial, including that his jail conditions were deplorable and the U.S. government selectively targeted him for prosecution.

The office of U.S. Attorney Breon Peace in Brooklyn did not immediately respond to a request for comment.

Guzman was convicted in February 2019 of trafficking billions of dollars of drugs and conspiring to murder enemies, stemming from his role as a leader of Mexico’s Sinaloa cartel.

He has been serving a life sentence at Colorado’s Supermax, the most secure federal prison, and was also ordered to forfeit $12.7 billion.

Guzman’s appeal focused on a Vice News article published one week after the verdict, where an unnamed juror said at least five fellow jurors followed media coverage of the trial, and lied about it to the presiding judge.

The coverage included accusations that Guzman had drugged and raped teenage girls, which Guzman’s lawyers denied, and U.S. District Judge Brian Cogan refused to allow into the trial.

Judges in high-profile cases ordinarily instruct jurors not to follow their trials in newspapers, TV and the internet.

Circuit Judge Jon Newman said the unnamed juror’s unsworn, uncorroborated statements to Vice News were not “clear, strong, substantial and incontrovertible evidence” requiring Cogan to haul jurors back for a hearing on their conduct.

“None of the allegations in the Vice News article shows that any juror was not impartial, harbored bias against Guzman, or was otherwise unfit to serve,” Newman wrote.