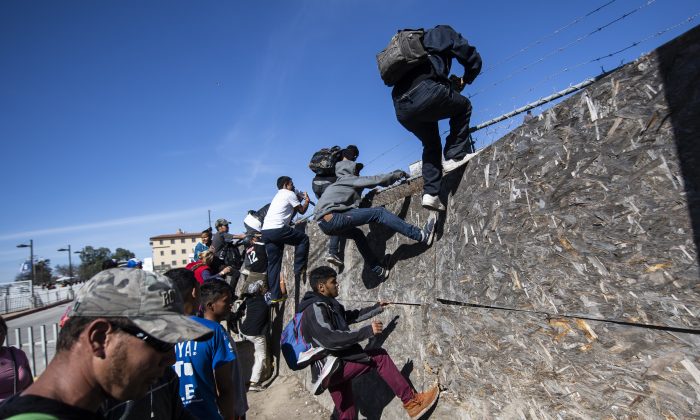 A group of Central American migrants -mostly from Honduras- get over a fence as they try to reach the US-Mexico border near the El Chaparral border crossing in Tijuana, Baja California State, Mexico, on Nov. 25, 2018. (Pedro Pardo/AFP/Getty Images)
Crime and Incidents

Convicted Murderer Traveling to US in Migrant Caravan Arrested

A convicted murderer from Honduras is behind bars after being arrested on the night of Nov. 24, while illegally entering the United States with other members of the migrant caravan.

Authorities have identified the man as 46-year-old Miguel Angel Ramirez who was arrested about one mile east of the San Ysidro Port of Entry, along with other two men crossing the border illegally, Customs and Border Protection (CBP) said in a press release.

CBP agents discovered that Ramirez was recently released from prison in Honduras. He later admitted he was arrested, and convicted for murder in Honduras, and released just four months ago.

“The San Diego Sector Border Patrol’s Foreign Operations Branch corroborated the man’s admission with the Honduran Consulate in Los Angeles, and discovered that Ramirez served 10 years in a Honduran prison for homicide, and three years for robbery,” CBP said.

Ramirez admitted he traveled with the migrant caravan from Honduras to Guatemala and Mexico. The other two men arrested with Ramirez are also Honduran nationals, and one of them was previously deported according to CBP.

The arrest was made a day after CBP arrested an admitted MS-13 gang member, who was also a member of the migrant caravan, at the Calexico Port of Entry.

Villalobos-Jobel later admitted to being a Honduran citizen and active gang member with MS-13, a notorious transnational gang short for Mara Salvatrucha 13.

Villalobos-Jobel told CBP agents he traveled from Honduras to the southern border with the migrant caravan. A group from the caravan rushed the border on Sunday, Nov. 25, forcing American officers to fire tear gas to disperse the mob.

An estimated 8,500 migrants have flooded into Tijuana, just south of the border, as President Donald Trump works to prevent them from entering the United States, The Epoch Times reported.

The Department of Homeland Security (DHS) said at the beginning of November more than 270 members of the caravans are confirmed to have criminal histories, including known gang membership, the Epoch Times reported.

“Those include a number of violent criminals—examples include aggravated assault with a deadly weapon, armed robbery, sexual assault on a child, and assault on a female,” DHS said.

DHS Secretary Kirstjen Nielsen later said in a Nov. 26 statement the caravan members are “predominately male,” after some from the caravan attempted to force its way into the United States on Nov. 25 at the San Ysidro border crossing from Tijuana, Mexico.

“Caravan members are predominately male. It appears in some cases that the limited number of women and children in the caravan are being used by the organizers as ‘human shields’ when they confront law enforcement,” Nielsen said.