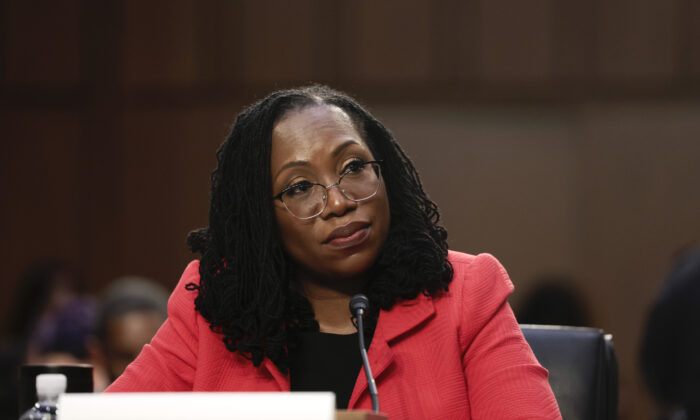 A man convicted of child pornography distribution is grateful that Judge Ketanji Brown Jackson gave him a sentence lower than that recommended by prosecutors and sentencing guidelines.

Wesley Hawkins said he was displeased when Jackson sentenced him in 2013 but later reconsidered his view.

“I wasn’t very happy that she gave me three months, though, after reflection when I was in jail, I was hearing from other people who said it was their first time arrested and they got five years, six years,” Hawkins told the Washington Post.

“I feel that she chose to take into consideration the fact that I was just getting started and she knew this was going to hold me back for years to come regardless, so she didn’t really want to add on to that,” he added.

A clerk at the appeals court Jackson serves on didn’t pick up the phone or return a voicemail seeking comment on the remarks. The White House didn’t return an inquiry.

President Joe Biden chose Jackson, who he previously selected as an appeals judge, to serve on the nation’s top court after Justice Stephen Breyer decided to retire.

When sentencing Hawkins, Jackson was a district judge. She was nominated to that position by President Barack Obama.

During the hearing where the sentence was handed down, Jackson called sentencing guidelines outdated because they do not “adequately distinguish more serious child pornography offenders from the less serious child pornography offenders, adding that she believed the collection of images “was not actually as large” as it seemed “because it consisted of 16 digital images and 17 digital movie files.”

That number did not “signal an especially heinous or egregious child pornography offense,” she said. She also said that the case “is different” because the children in the images “were not much younger than you” and opined that Hawkins was “fascinated by sexual images involving what were essentially your peers.” At the end of the hearing, she said she felt sorry for Hawkins and his family members “for the anguish that this has caused all of you” and that she felt terrible because “sex offenders are truly shunned in our society.”

Hawkins wanted images of children as young as 11, according to messages he sent an undercover agent. He told the agent he had images of kids as young as 8.

“I recall that I found that case, like all child pornography cases, to be difficult, really difficult. And his case, I recall, was, in many ways, an outlier in terms of the various considerations that congress required me to take into account,” Jackson told senators during her confirmation hearings. “As in every child pornography case that I sentenced, I considered all of the evidence, all of the relevant factors. It is not the same exercise to look at a transcript, to think about guidelines, to not have in front of you the individuals, the victims, the pictures, the circumstances that trial judges have to review in these cases or any cases.”

A number of senators have questioned the lenient sentencing.

“You had an 18-year-old who possessed and distributed hundreds of images of 8-year-olds and 9-year-olds and 10-year-olds and you gave him frankly a slap-on-the-wrist-sentence of three months,” Sen. Josh Hawley (R-Mo.) told the judge.

According to a court document signed by Jackson in 2019, Hawkins was ordered to check in to a residential facility for 180 days and have his computer searched regularly. It remains unclear what happened. Jackson said during the hearings she didn’t remember, which Sen. Tom Cotton (R-Ark.) said wasn’t credible given how much she’d been questioned on the case by him and his colleagues.

Hawkins told the Post that “what I did was a bit monstrous” but said he was “just a young man” when he committed the crimes. He also did not dispute the Post’s description of sealed material that says he searched for images of males as young as 13 after he was released, prompting the 2019 order. “According to the treatment I was in, they felt I was at a high risk of reoffending,” he said.

Eleven Republican senators wrote to Jackson on Friday, asking for transparency about what occurred in 2019.

“Our review of your nomination requires that the committee fully understand the circumstances that informed your actions in this case,” they wrote.