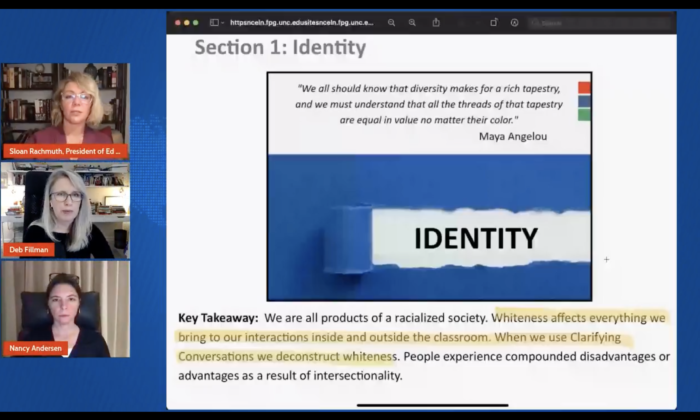 After content promoting critical race theory (CRT) found within a professional development program for pre-kindergarten teachers of disabled children was reported by two education watchdog groups in North Carolina, the state board of education-approved contract for the program has come to a halt.

Overarching themes of “decentering whiteness” and “centering children of color” that surfaced were alleged to be a part of the North Carolina Department of Public Instruction (NCDPI) collaboration with the University of North Carolina (UNC) Chapel Hill’s Frank Porter Graham Child Development Institute (FPG), and the Office of Early Learning (OEL) through a program called the NC Early Learning Network (ELN).

NCDPI Superintendent Catherine Truitt said in a statement on Jan. 14 that she will not sign the proposal to extend the previously amended pre-K contract.

“Instead, I will create a new contract proposal that has strict guardrails and new accountability measures to ensure the true needs of our youngest and most vulnerable learners are met,” Truitt said.

Both Dr. Nancy Andersen with No Left Turn in Education, and Sloan Rachmuth, an investigative reporter and president of Education First Alliance NC—two organizations that investigate CRT ideologies in the K-12 public school system in North Carolina—told The Epoch Times that the program harbors racist content that violates the Civil Rights Act of 1964, which, in addition to its prohibition on discrimination on the basis of race, religion, gender, and national origin, it prohibits the use of federal funds to facilitate such discrimination.

Andersen found the material, then reported it to Rachmuth who brought the issue to the attention of a wider audience, such as the NC Citizens for Constitutional Rights, through her articles and podcasts.  This prompted what Rachmuth said to be up to 600 people calling the General Assembly in protest.

The $7 million to fund the program comes from the federal Individuals with Disabilities Education Act (IDEA) Preschool Handicapped Grant awarded to the NCDPI.

The funds will be used to develop training programs with a webinar titled “Equity and Cultural Responsiveness in the Early Childhood Classroom,” according to the contract.

Andersen said she found the material on the ELN website.

According to Andersen, on Jan. 5, the night after the state board of education’s meeting during which the renewal of the contract was presented, the CRT content was removed from ELN’s website.

On each document Andersen screenshot, the imprimatur at the bottom of the page stated the ELN is a joint project with NCDPI, the OEL, and the FPG.

Not Approved by NCDPI

However, when reached for comment on Jan. 25, a spokesperson for NCDPI told The Epoch Times that the content was a part of an FPG summer seminar that was not connected to the contract.

The NCDPI spokesperson said the content was removed because the NCDPI logo was used at the bottom of the pages without permission “and because they exceeded the scope of the contract.”

FPG itself has had a relationship with social justice theories and theorists, such as its own Iheoma U. Iruka, a research professor at UNC whose work centers around CRT, and she has advocated for mandatory CRT training.

The UNC FPG describes itself as an institute of scientists that research beneficial educational methods for children for the purpose of improving children’s lives and informing public policy, however, like UNC itself, it has been charged by some with concocting far-left leaning ideological programming rooted in Marxist theory under the guise of social justice.

FPG did not respond to The Epoch Times’ request for comment.

“Whiteness affects everything we bring to our interactions inside and outside the classroom,” content pulled from the ELN website reads, which later goes on to “deconstruct” and “challenge whiteness.”

Among the ways to center children of color, according to the pages, are to ensure “nursery rhymes, charts, etc. do not show animals with human characteristics,” and “making sure that people are not used as alphabet letters or objects.”

In addition to the content, Andersen said the ELN website contained the March 2021 webinar in which one consultant stated that she wants “to position myself as a white woman and acknowledge my own privilege and experiential lens or way of knowing the world is that of a white woman in the United States.”

“I continue to examine my own internalized racism and socialization, and I embrace and am grateful for this journey of learning to be anti-racist,” the consultant said.

The webinar, which was also pulled, and the two consultants speaking in it are listed and funded in the contract.

On page 30 of the contract, the salary for the two consultants in the webinar is listed as $113,000.

Andersen also said there was a Buzzfeed link to a “How Privileged Are You” quiz.

North Carolina Republican legislators have spoken out against CRT despite Democrat Gov. Roy Cooper vetoing a bill in September 2021 that would have prohibited teaching CRT in the classroom.

Lt. Gov. Mark Robinson, a Republican, formed a task force to allow for teachers to anonymously submit evidence of CRT, though it was ignored by Democrats, with Cooper referring to CRT as “conspiracy-laden politics.”

Debate continues into 2022 over whether CRT is a fact-based examination of history leading up to present society or a manufactured worldview magnified through a lens that fictionalizes racism as the structural component of all facets of life for the purpose of fostering division.

Though CRT has appeared to be a party-line issue, both Andersen and Rachmuth argue that Truitt, a Republican who has spoken out against CRT, brought the renewal of the contract to the state board of education’s table, which is comprised of seven Democrats and five Republicans, leading to the vote approving the contract.

Though Truitt doesn’t have a vote, state statute and board policy give Truitt authority to choose contracts, vendors, and make recommendations to the board.

Andersen emailed Truitt her concerns a week before the board’s session, including screenshots of CRT content she found on ELN’s website that Andersen said Truitt acknowledged as “horrific.”

Despite Truitt’s awareness of the material, Andersen said she remained silent before the vote.

“If she’s presenting it to get approved, and she says she’s anti-CRT, why would she not say anything?” Andersen asked.

In a Jan. 5 email response to Andersen’s concerns that the NCDPI was becoming infiltrated with what Andersen said were FPG and Iruka’s Marxist ideologies masked as “equity,” Truitt said, “In my opinion, it is a big leap from ‘equity and cultural responsiveness’ to communism and CRT and there is no proof that this contract is going to lead to either of those things.  In my experience, whether or not an equity initiative and/or culturally responsive teaching devolves into CRT depends on the people involved.”

For Rachmuth, the move to bring a contract with CRT content up for renewal ignited distrust.

“They have ceded control of the education system to leftists for years, and now we are supposed to believe they have awakened to this great problem,” Rachmuth said. “As we approach the midterms, we need to pump the brakes here on trusting either side.”

Though Truitt’s announcement that she would not sign the contract brought some hope for Andersen and Rachmuth, they said they remain skeptical.

“How does she intend to legally not sign a contract she put forth and recommended to the board to approve?” Andersen asked.

The state board of education meets again in February.

When asked, the NCDPI spokesperson said there would be more information coming out on the issue in the coming week.