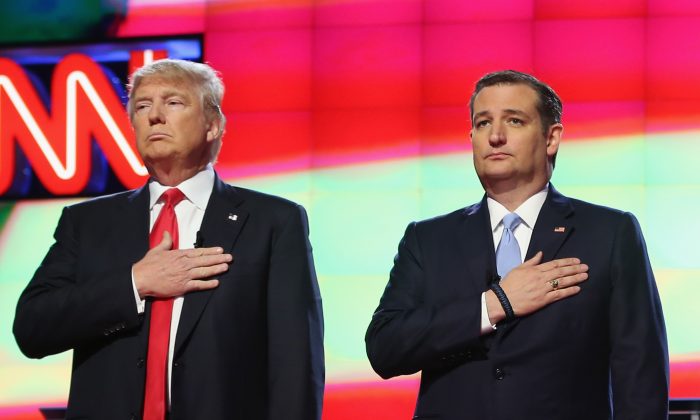 As Donald Trump inches closer to securing the Republican nomination, the Republican Party is increasingly abuzz with talk of a “contested convention” in Cleveland, Ohio, come June.

At this point, it’s the only way for the party to avoid a Trump-nomination outcome.

But what is a contested convention?

A convention is only contested “when it begins with the ultimate nominee still in doubt” according to Josh Voorhees of Slate.

In the current GOP primary system of delegates, the party has a total of 2,472 delegates, and a candidate requires 1,237 delegates in order to reach a majority. Delegates often include party activists, local political leaders, or early supporters of a candidate.

If none of the candidates reach the required number of delegates, then the convention is considered contested.

Here are five points to explain the process of a contested convention:

Let’s first start by explaining what normally happens in a convention.

Most modern conventions amount to little more than a spectacle of unity for a political party.

Delegates are chosen by the states in the primary season, and by the time the convention rolls around, those delegates are ready to rally behind a single candidate going forward into the general election.

Conventions are usually the time for rallying, but a contested convention would instead have political fighting and potential brokering for delegates.

The process starts with the first ballot, where delegates are bound to cast votes for the candidate chosen by voters, and handed down by the state.

About 95 percent of the delegates show up to the convention bound, and the other 5 percent show up “unbound.” Unbound delegates are like free agents and can vote however they feel.

If a nominee does not have the majority of the delegates, then it’s considered a contested convention and it goes to a second round of ballots.

Once the first round of balloting finds that a convention is contested, then the percent of delegates “unbound” goes from 5 percent to 57 percent, and delegates are free to choose whomever they want.

That means any candidate the delegates choose can be viable, and candidates would have the chance to lobby or broker their way to getting more delegates. If there is a contested convention, it might come down to which candidate has the most endorsements from party delegates.

A convention is run on a version of Robert’s Rules of Order which means that the chairman and delegates get to decide how long between casting ballots.

Some states required their delegates to stay bound to the state nomination for multiple ballots, for instance, Florida binds its 99 delegates for three rounds of voting before they can become unbound.

As more ballots are cast, more delegates are unbound—depending on state rules—and the more freedom the delegates will have to choose the nominee for the party.

4. How Many Rounds of Votes Does it Take?

Voting continues indefinitely until a consensus majority is reached.

In 1924, it took the Democratic party 103 ballots before deciding on John W. Davis who went on to lose the general election to Calvin Coolidge.

In Davis’ case, he was nominated as a compromise when a consensus couldn’t be reached between the two frontrunners William McAdoo and Al Smith.

This would be similar to Donald Trump and Ted Cruz going to the convention without the required number of delegates, and John Kasich ends up being chosen as a compromise.

According to this Pew Research Study, 22 presidential elections held between 1868 and 1952 needed multiple ballots. The last one being in 1952 when the Democrats nominated Adlai Stevenson.

5. What Does it Mean to Be Chosen in a Contested Convention?

If a candidate were chosen by a contested convention and not by the voters in the primary system, then the phrase “the party decides” would hold true.

Conventions are party-run affairs, and a party overriding the voters choice would give the nominee very low chances of winning in the general election.

The last time a nominee chosen in a contested convention went on to win was in 1932 when Franklin Roosevelt fell short of getting the then-required two-thirds of the delegates to get the nomination.

He got the delegates and went on to win the general election.