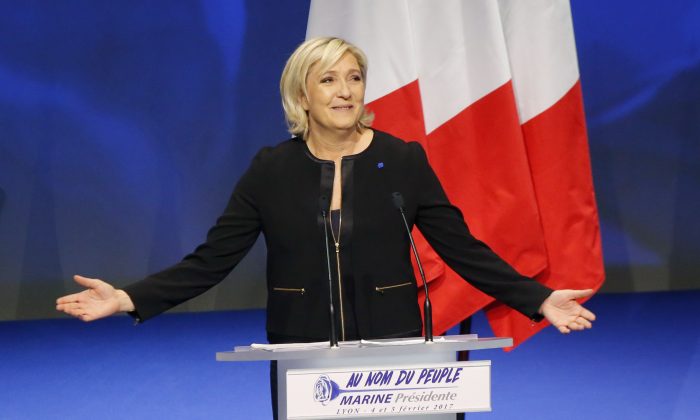 To applause and cries of “On est chez nous” (We are in our land), Le Pen served up the grand themes of the party that have made her a leader in early polls of the spring presidential election.

“We are at a crossroad….This election is a choice of civilization,” she said, asking whether her three children and other young citizens would have the rights and culture of the current generation. “Will they even speak our French language?”

Le Pen on Saturday unveiled her 144 “commitments,” a nationalist agenda that envisions a France unshackled from the European Union and NATO and that ensures work, health care and other services for its own citizens amid drastically reduced immigration.

She said she is defending both France’s material and immaterial patrimony, “which has no price” and is “irreplaceable.”

Running on a campaign slogan of “In the Name of the People,” Le Pen called out for French “patriots” on the left and right to join with her.

In politics, “the division is no longer right-left (but) patriot-globalist,” she said. “You have your place at our side.”

The National Front has taken heart in the disarray of the left with the unpopularity of Socialist President Francois Hollande who decided not to seek a new mandate. The right’s leading candidate, Francois Fillon, has been caught up in a corruption scandal, opening the way for maverick centrist Emmanuel Macron—who could face off with Le Pen.

Le Pen has been a leader in early polls, which put her placing at the top in the April 23 first-round vote but not winning the May 7 runoff.

If elected, she envisions a “government of national unity” formed after June legislative elections.

Le Pen told the crowd at the congress center in the southeastern city of Lyon that globalization is “erasing” France and Islamic fundamentalism is “planting itself in some neighborhoods … and vulnerable minds.”

Le Pen listed Muslim veils, mosques, or prayer in the streets of France as unacceptable cultural dangers that “no French person … attached to his dignity can accept.”

“When you arrive in a country, you don’t start violating laws, demanding rights,” she said in reference to what she calls “massive immigration.”

“There will be no other laws and values in France but French.”

Among her 144 commitments is to limit immigration to 10,000 and restrain family reunification policies that has allowed many immigrants, mainly from former French colonies in North Africa, to bring in relatives.

She said she would arrange for foreigners convicted of crimes to serve their prison terms in their homelands.

Britain’s vote to leave the European Union and the election of U.S. President Donald Trump have boosted Le Pen supporters, with many applauding in private Trump’s election.

She said this revealed the “awakening of the people against oligarchies.” She praised Trump as a man who respects campaign promises and “acts quickly.”

Le Pen’s top lieutenant said earlier Sunday that Brexit and the Trump election have given the French a “reason to vote” because it can result in real change.

Florian Philippot said people who thought voting “served nothing” now have proof that an alternative is possible.

He claimed that National Front membership rose after Brexit and again after the Trump victory but gave no figures.

Philippot conceded Sunday that Le Pen’s program would mean a “slight increase” in the nation’s debt in the first year if she is elected in the two-round presidential election.