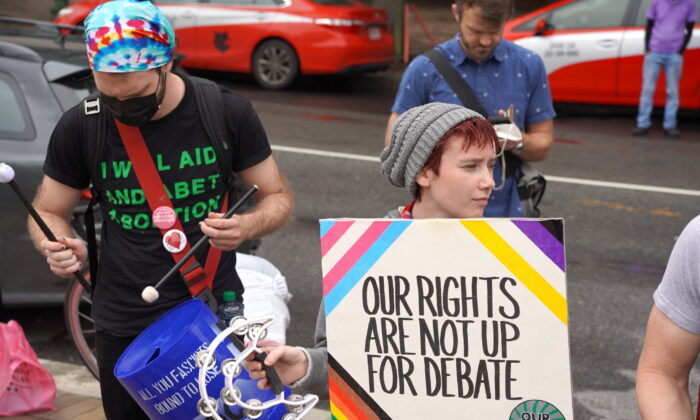 Transgender rights group members protest against an “Our Bodies, Our Sports” rally at the Freedom Plaza in Washington on June 23, 2022. (Terri Wu/The Epoch Times)
By Darlene McCormick Sanchez

Texas school boards are being pressured to adopt policies giving transgender students the right to use preferred pronouns, school bathrooms, locker rooms, and showers, according to conservatives who feel schools are stepping on parental rights.

The Texas American Civil Liberties Union (ACLU) presented a “best practices” program on transgender student legal issues based on an interpretation by President Joe Biden’s Department of Education during a Sept. 24 convention in San Antonio.

ACLU attorneys gave a presentation at the convention that included transgender students speaking directly to officials on “challenges” in schools over restrooms, sports, dress codes, pronouns, and bullying.

David Hamilton, a member of the Fort Bend Independent School Board who attended the ACLU presentation, posted on Twitter that the union was “trying to force Texas public schools to allow boys in girls’ locker rooms, showers, restrooms, and athletics.”

“They had a biological girl who IDs as a boy speak because that appeals better,” he wrote.

When contacted by The Epoch Times, Hamilton said he viewed the ACLU presentation as a warning that schools must accommodate transgender student rights or face lawsuits from it or other liberal groups.

The ACLU didn’t immediately respond to a request for comment.

Texas state Rep. Steve Toth (R-Woodlands) agreed there is a concerted effort to push schools to accept the Biden administration’s interpretation of Title IX as law. But part of the problem lies with the trustees who don’t question what they’re told, he said.

“There’s no way this isn’t coordinated,” he said. “We’re hearing this in all 50 states.”

“If they put this into place, they’re violating the law,” said Toth, who intends to introduce legislation in 2023 to protect students from sexualization at school.

Title IX, according to the U.S. Department of Education’s Office for Civil Rights, now permits students to use restrooms, locker rooms, and compete on sports teams based on their gender identity instead of their biological sex.

Biden issued an executive order after a June 2020 landmark decision by the U.S. Supreme Court that expanded the legal definition of sex discrimination to include sexual orientation and gender identity in employment situations.

The Department of Education and U.S. Equal Employment Opportunity Commission (EEOC) issued “guidance” in June 2021 prohibiting such discrimination and promising enforcement action against violators, including the loss of federal funding for schools.

However, the Biden administration’s push to enforce the executive order designed to protect the LGBT community from discrimination in schools and the workplace was blocked by a Tennessee federal judge in July, while a legal challenge initiated by 22 attorneys general, including Texas, is making its way through the court system.

Also, the Biden administration’s policy directly opposes a Texas law approved last year that requires student-athletes to play on sports teams that correspond with their sex as listed on their birth certificate.

Julie Pickren, a former school board trustee for the Alvin Independent School District and a candidate for State Board of Education District 7, told The Epoch Times that trustees need a choice regarding training that’s objectionable to the values of conservatives.

“We have a responsibility to protect our kids as parents, educators, and public servants,” she wrote in a text.

Hamilton said that ACLU lawyers presented information at the convention indicating suicide attempts by transgender students decreased if schools affirmed their choices on things such as pronouns and bathroom preferences. He said the presentation would give school districts who wanted to adopt liberal policies on transgender students an excuse to do so.

“Why are school boards paying tax dollars to an association indoctrinating our trustees?” she asked. “Our legislature has done nothing to stop it.”

Several years ago, her son walked into the boy’s bathroom in high school to find a girl he had known since grade school, Bakich said.

Her son asked his classmate why she was in the boy’s restroom, and the girl announced she was a male. Her son disagreed, telling the classmate he’d known much of his life that she was a girl and needed to leave.

The girl, who was slight of stature, didn’t appreciate the observation and “bowed up” to her son, who stood over 6 feet tall, wanting to fight him, Bakich said.

Bakich said the school’s principal at the time said there was nothing he could do.

TASB has developed a policy model prohibiting discrimination based on sex, gender, or any other basis prohibited by law, which suggests transgender students should be included.

TASB’s document went on to say that students generally have a right to be recognized as transgender in school and that school districts are subject to the interpretation of Title IX by the Department of Education.

In an email, TASB spokeswoman Theresa Gage-Dieringer told The Epoch Times that the nonprofit didn’t endorse speakers at the convention. School trustees, district administrators, and association staff voted on applications submitted to present at the conference, she wrote.

“The goal of the process is to select wide-ranging K-12 topics,” she wrote. “As noted in the convention program, ‘the views expressed in presentations and materials are the views of the presenters.’

“On issues of transgender students, TASB and TASA always comply with federal and state laws and work to help our members also comply with those laws.

“It’s our understanding that the materials presented in this session provided guidance on current law for school districts.”