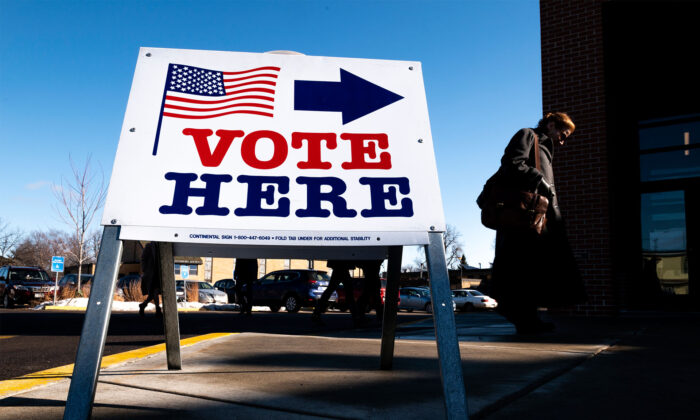 A voter arrives at a polling place in Minneapolis, on March 3, 2020. (Stephen Maturen/Getty Images)
Politics

Conservative nonprofit Heritage Action for America plans to spend at least $10 million on a wide-ranging election integrity campaign to strengthen voting laws in eight swing states, according to a spokesperson.

Noah Weinrich told The Epoch Times in an emailed statement that the $10 million will be an initial investment “and we will devote whatever further funding it takes to accomplish our goal.”

The campaign will focus on Arizona, Florida, Georgia, Iowa, Michigan, Nevada, Texas, and Wisconsin, and will involve digital and television advertisements, as well as direct lobbying of state lawmakers.

Heritage Action, which is affiliated with the right-leaning think tank The Heritage Foundation, seeks to turn “conservative ideas into reality on Capitol Hill,” the nonprofit states on its website.

“We do that by holding lawmakers accountable to their promises to advance the conservative principles of free enterprise, limited government, individual freedom, traditional American values, and a strong national defense.”

Election integrity came to the forefront in a dramatic way in 2020, with former President Donald Trump and his allies making claims that reduced security measures—primarily around mail-in ballots—led to fraud that cheated him out of victory.

Commenting on the election integrity campaign, Anderson said that “after a year when voters’ trust in our elections plummeted, restoring that trust should be the top priority of legislators and governors nationwide.”

Progressives—and their Democrat allies—tend to state that barriers to casting a ballot should be as low as possible and that the kind of security measures pushed by conservatives, such as stricter voter ID or proof-of-citizenship laws, amount to disenfranchisement. Progressives often frame the debate as between voter suppression and expansion, while conservatives tend to see it as election security versus vulnerability to abuse.

The Brennan Center for Justice, an advocacy group that pushes for progressive policies, counted 106 bills in 28 states designed to tighten voting standards so far this year, a significant jump from last year. At the same time, 35 states introduced a total of 406 bills to make voting less restrictive, also up from last year.

A key law in this regard being pushed by Democrats is H.R. 1, or the For the People Act of 2021. It passed the Democrat-controlled House last week on a largely party-line vote of 220–210, with all Republicans voting against it.

The controversial election reform package, which spans nearly 800 pages, seeks to impose requirements on voting procedures across the entire country. Its provisions include transferring authority over how elections are administered to the federal government from states, mandating automatic voter registration in all 50 states, and legalizing nationwide vote-by-mail without the need to provide photo ID to obtain an absentee ballot.

The organization argues that the bill “interferes with the ability of states and their citizens to determine qualifications for voters, to ensure the accuracy of voter registration rolls, to secure the integrity of elections, to participate in the political process, and to determine the district boundary lines for electing their representatives.”

The Biden administration, which has pushed for the bill, praised its passage, saying the legislation is “urgently needed to protect the right to vote and the integrity of our elections, and to repair and strengthen American democracy.”

A previous version of the bill had passed the Democrat-controlled House 234–193 at the beginning of the 116th Congress in 2019 but ultimately wasn’t taken up in the Republican-controlled Senate.

This article has been updated with comments from Heritage Action.