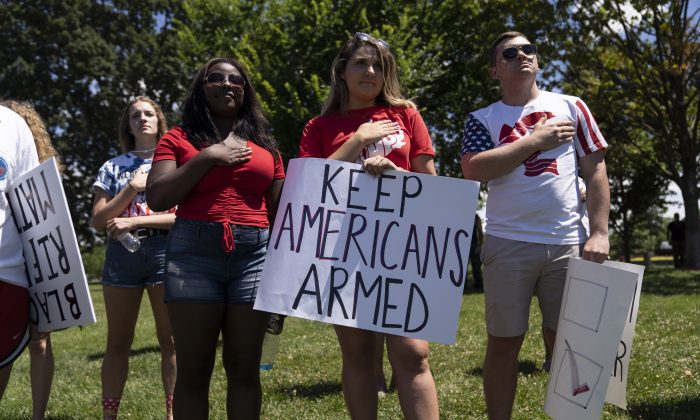 People sing the national anthem during the March For Our Rights rally, promoting Second Amendment Rights and the safety of students in schools, outside the U.S. Capitol in Washington on July 7, 2018. (Toya Sarno Jordan/Getty Images)
Politics

These programs, already active in 17 states and the nation’s capital, allow police officers to seize a person’s guns if the person becomes the subject of a red flag warning report from police, a family member, or even a former live-in boyfriend or girlfriend. If a judge determines the person is a danger to himself or others, often at a hearing at which the gun owner isn’t present, then his or her guns are confiscated.

“It would definitely cause a lot of people to not vote for Trump, unfortunately,” state Rep. Stewart Jones (R-S.C.) told The Epoch Times. “In South Carolina, myself and a group of other legislators are signing a letter to President Trump, Senator Graham, and Senator [Tim] Scott to warn them about the dangers of the red flag laws. So far, we’ve gotten South Carolina legislators who have signed it, and we’re probably going to send it Friday with about 20 signatures.”

Now, more than two weeks removed from a mass shooting at an El Paso, Texas, Walmart that galvanized anti-gun commentary in the media, Trump’s support for red flag laws seems to be flagging, given the focus of his most recent remarks.

Trump spoke of the mental health component of the mass shooting problem in his remarks to the press on Aug. 19.

“So, Congress is working on that. They have bipartisan committees working on background checks and various other things. And we’ll see,” Trump said, referring to possible gun control actions.

Activists continue to step up their pressure campaign against Republicans and the president over the issue.

Twenty-six members of the South Dakota legislature signed a letter to Trump and their state’s federal representatives, including Thune, advocating against any red flag gun confiscation program.

“Instead of stripping law-abiding citizens of their constitutional rights and placing them in fear with proposed red flag laws, let’s take this opportunity to do the right thing and make would-be mass murderers fear for their safety if they contemplate acts of violence against fellow Americans,” the legislators wrote in their letter.

“Compared to all of the gun control proposals proposed as ‘solutions’ to the horror of these random mass murders, the repeal of ‘gun-free zones’ is the simplest, least expensive, most logical and is morally imperative,” according to the letter.

“The reality is that absent institutionalization of disturbed individuals, such persons presenting actual threats to society will remain a threat even after seizing their firearms, as they will still have the ability to use a knife, motor vehicle, or countless other potentially lethal items to commit mass murder,” reads the letter.

Republican Senate candidate and unofficial Trump adviser Kris Kobach of Kansas recently told The Epoch Times that “red flag laws that have been passed at the state level deny due process in multiple ways to the targets of individual gun confiscation complaints.”

“The standard of proof is very low. They have a hearing where they seize the person’s guns right away without even being told. The standard for disarming the individual is very low, it’s not a beyond reasonable doubt standard,” Kobach said.