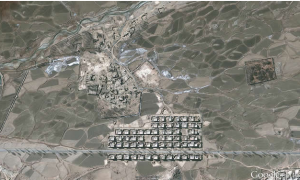 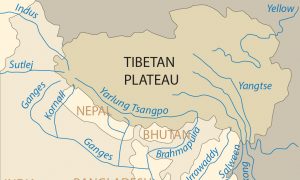 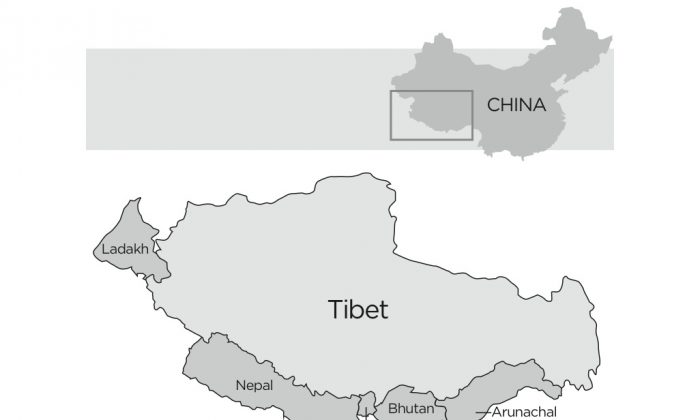 In recent months, there has been extensive press coverage of Chinese military maneuvers in the South China Sea, targeting Japan and the Philippines. However, the world media has largely ignored what China is doing on its western front.

Since April 2013, the People Liberation’s Army (PLA) has made several incursions into India and Bhutan, setting up military encampments, hoisting the Chinese flag, and interfering with Indian patrols. While these incidents may appear to be small skirmishes, they are part of a larger pattern of Chinese military expansion into South Asia that began six decades ago, when Chairman Mao annexed Tibet.

The elemental facts about Tibet are not widely known, but any map reveals the enormous resources and strategic advantage gained by its capture. Tibet gives China a continuous border with Burma, Bhutan, India, Nepal, and Kashmir, access to Asia’s largest mineral deposits, and control of the headwaters of Asia’s great rivers.

These rivers flow from the Tibetan Plateau through 11 nations, sustaining 3 billion people from Peshawar to Beijing. In the coming water wars, China has a firm grip on the water tower of Asia.

In 1950, Mao invaded Xinjiang, and in 1951, he invaded Tibet, doubling the size of the People’s Republic of China. Mao imposed “democratic reforms” throughout Tibet, seizing property and subjecting thousands of people to “thamzing,” or “struggle sessions,” wherein victims were publicly tortured and murdered.

Indian intelligence officers documented the crisis and implored Prime Minister Nehru to take action, but in the post-colonial era, Nehru sought a friendship with Mao and invested political capital into his vision of a grand Indian-Chinese alliance, or “Hindi-Chini Bhai-Bhai,” a slogan for “Indian and Chinese brotherhood.”

Nehru’s faith in Mao was exposed as a tragic blunder in March 1959, when the Dalai Lama and thousands of Tibetan refugees fled to India. Mao claimed his prize: the rich, unspoiled Tibetan Plateau. Over a million Tibetans perished, and more than 6,000 monasteries were looted and razed as China systematically destroyed Tibet’s ancient Buddhist civilization.

Frank Morares, author of “The Revolt in Tibet,” wrote: “Nehru greatly underestimated the strength of Han expansionism reinforced by the even more purposeful aggressiveness of Communist imperialism. It cannot be claimed that he was not forewarned.”

On Oct. 10, 1962, Mao invaded India from Tibet. The India-China War was brief, and casualties were few, yet the consequences of this anxious month of skirmishes were enormous.

The war handed Mao a stunning victory and dealt Nehru an equally stunning defeat. It destroyed Nehru’s vision of pan-Asian unity in a post-war world and greatly advanced China’s hegemonic ambitions across the continent. It may have been a short war, but it was not a minor one.

The 1962 war had a deleterious effect on the Himalayan Belt. The old trade routes and pilgrim trails that had for centuries linked Tibet to Nepal, Bhutan, Sikkim, and India were sealed by the Red Guards. Nepal and Bhutan sought protection by aligning with India, and to this day, India provides 100 percent of Bhutan’s security.

By strengthening Chinese strategic power over South and Southeast Asia, China threatens to fulfill Mao’s prophecy after victory in the 1962 war that China would one day lay claim to “Tibet’s Five Fingers”: Ladakh (in far northern India), Nepal, Sikkim (the Indian state between Nepal and Bhutan), Bhutan, and Arunachal (at the northeastern tip of India).

In 1996, Chairman Mao, in the form of an aggressive new Nepali Maoist movement, appeared in Nepal, the largest state in the Himalayan Belt. The Nepali People’s Liberation Army swiftly set up encampments, stockpiled weapons, robbed local banks, tortured and slaughtered a helpless rural populace, and forced children by the thousands to serve as soldiers in the Maoist rebellion.

In January 2000, the young Karmapa Lama made a bold escape from Tibet, passing in secret through Nepal on his way to India. China moved swiftly to crush support for Tibet in Nepal.

On June 1, 2001, Nepal’s King Birendra and 15 members of his immediate family were massacred during a family dinner in their palace home. In the chaos that followed, Nepal’s Maoists rose to power in distinct parallel with China’s expanding influence in the region.

Diplomats and analysts initially dismissed the Maoists as an aberration, coming so soon after the collapse of the Soviet Union, and most believed that the movement came from India. But where did support for the Indian Maoists come from? China.

After the Sino-Soviet Split of 1969, India’s Marxists, the “Naxalites,” aligned with Mao, and after the collapse of the Soviet Union in 1991, China was the only communist empire left standing.

In the past decade, China’s foothold in Nepal allows arms and cash to flow to Maoist cells in India, which have surged in force and ferocity and are now categorized as the greatest threat to India’s domestic security.

In 2000, China launched “Xi Bu Dai Fa,” the opening up of the Western regions, a vast industrial development plan to extract Tibet’s natural resources, facilitated by rail and roadway expansion. The project has also accelerated militarization of the Tibetan Plateau.

In 2010, China announced that it had expanded troop deployment along the Tibet border and completed construction of six military airfields in Southern Tibet, equipped with a new fleet of drone aircraft.

Since 2009, over 120 Tibetans living under Chinese rule have self-immolated to protest the Chinese occupation and call for the return of the Dalai Lama. China has responded by intensifying the “Strike Hard” campaign against “splittists” and “counterrevolutionaries” in Tibet, and by flexing its military might against India, Nepal, and Bhutan, which hold the last vestiges of Tibetan civilization.

Indian analyst Asif Ahmed notes, “As long as fires of Tibetan nationalism burn in Tibet and a diaspora of over 100,000 Tibetans, China will view India with grave suspicion.”

Maintaining control of Tibet is a strategic and economic priority for China, as it struggles to contain the forces of ethnicity among its subject peoples, lest the empire fracture as did the USSR. China’s occupation of Tibet provides a vital window into the nature of China’s imperial ambitions.

The recent spate of PLA incursions into India and Bhutan are hardly isolated incidents. China is testing the waters to ascertain what it would take to formally annex Nepal, Bhutan, Ladakh, and Arunachal Pradesh, which Beijing calls “Southern Tibet,” and thus extinguish resistance to Chinese rule in restive Tibet.

In January 2011, Chinese Defense Minister Liang Guanglie stated: “In the coming five years, our military will push forward preparations for military conflict in every strategic direction. … We may be living in peaceful times, but we can never forget war, never send the horses south or put the bayonets and guns away.” Take Beijing’s word for it: They are ready.