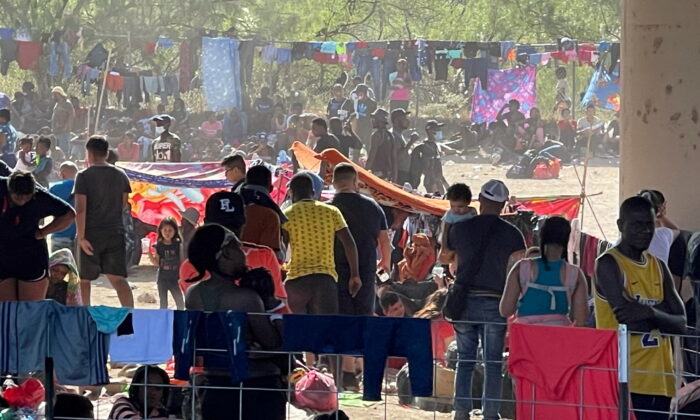 Rep. August Pfluger (R-Texas) is sounding alarm after after spending a day in the border town of Del Rio, Texas, where the illegal immigrants crisis, he said, “has reached a boiling point.”

Pfluger posted on Twitter new photos showing the makeshift campsite full of individuals who illegally entered the United States and took shelter underneath the border bridge connecting Del Rio to Ciudad Acuña, Mexico. He noted that there the crowd has grown to 15,000 on Saturday from 12,000 just the day before, with “hundreds more gathering every hour.”

I’ve talked to local leaders and seasoned law enforcement officers—the number 1 thing I’m hearing is this the worst they have ever seen it.

Where is the Administration? What is it going to take to get @POTUS and @VP‘s attention on this? pic.twitter.com/W8sOzZ4rk8

“Most were military aged males between the ages of 18-35. The majority of migrants were Haitian, but I talked to migrants from 6-7 countries including Cuba, Venezuela, Honduras, and more,” he wrote.

According to Pfluger, Customs and Border Protection (CBP) agents have been overwhelmed by the influx of illegal crossings, as undeterred migrants were “being pushed over the border.” The CBP has already closed the port in Del Rio, making Eagle Pass, which is located 60 miles southeast, the nearest port of entry.

“400 more CBP agents are being sent to Del Rio and CBP is utilizing flights to repatriate Haitians back to their home country, but based on what’s happening on the ground, this is not nearly enough to tamper the chaotic situation,” he added. “This crisis has reached a boiling point—Del Rio officials are not equipped to handle nearly 15,000 migrants pouring into their community.”

Pfluger’s visit comes as Del Rio Mayor Bruno Lozano called out President Joe Biden and Vice President Kamala Harris, demanding that they pay attention to what is happening in his town.

Harris, who in March was tasked with handling the border crisis, on Saturday made an appearance at Howard University, where she led a coin toss at the university’s football event.

“The VP is able to visit the fun events across the country, while American communities continue to grapple with failed immigration reform. Where is the visit to Del Rio, TX?” Lozano, a Democrat, commented on Harris’ post of her coin toss.

He also responded to another post by Harris where she said, “The U.S. is falling behind, on a global scale, on investing in childcare. We invest fewer public dollars in early childhood education and care relative to GDP than almost all other developed countries. With our Build Back Better Agenda, @POTUS and I are determined to change that.”

“The US is failing to protect its borders. Why aren’t you here? @POTUS,” Lozano wrote.