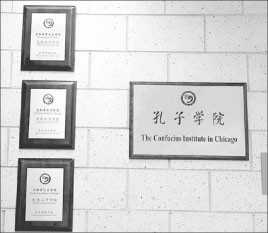 Confucius Institutes and Their Difficulties Come Under Scrutiny in China

Confucius Institutes established globally held a conference in Beijing earlier this week to discuss mounting financial and staffing difficulties. The institutions are funded by the Chinese Communist Party (CCP), and have already cost the regime over US$500 million in exchange for “soft power” and propaganda opportunities globally.

The Confucius Institutes, set up by the CCP to “promote Chinese language and culture”, are directly supported by the Chinese regime under the administration of Hanban, an organ affiliated with the Ministry of Education.

The Confucius Institutes suffer from a high turnover rate of teachers, the bulk of whom are short-term volunteers. The lack of full-time teachers has become a key problem in the overseas expansion of the once rapidly-growing institutions, reported People’s Daily.

Li Changchun, a former Politburo Standing Committee member, was quoted in The Economist as saying that the Confucius Institutes were “an important part of China’s overseas propaganda set-up.”

“By setting up and promoting the Confucius Institutes, the regime intends to cover up its spreading of communist thought. That’s why Confucius Institutes aren’t welcomed overseas,” said Sun Wenguang, a retired professor who taught at Shandong University. “They are short of teachers, too. Teachers with real academic competence are not willing to teach there.”

Jing Chu, a freelance writer in Guangxi, said: “The Confucius Institutes have one major feature, which is that they uphold the concept of authoritarian rule. The way in which they do this can be very deceptive.”

“Each Confucius Institute receives millions of dollars from CCP regime, and it is the CCP’s intention to use them to spread its communist culture around the world. It is just one step in the CCP’s great propaganda plan. The establishment of the Confucius Institutes also creates opportunities for corruption, allowing overseas speculators to profit off the regime’s money, which comes from the Chinese people’s taxes,” Jing said.

Jing added that poorly maintained school buildings are common in China, and many children still cannot afford to go to school—it angers him that the Party instead spends money on external propaganda, while disregarding the welfare of the Chinese people.

Earlier in May, scholar Cai Shenkun published an article in his blog titled “Who is paying for the Confucius Institutes?” The article said: “Insiders have revealed that all overseas Confucius Institutes are making enormous financial losses. There are many reasons for these losses, with the foremost being lack of transparent operations and financial conditions. Thus, on the one hand, the Confucius Institute project has become a bottomless financial pit. On the other, it has turned into an ATM for officials of the Education Ministry to wantonly withdraw foreign currencies.”