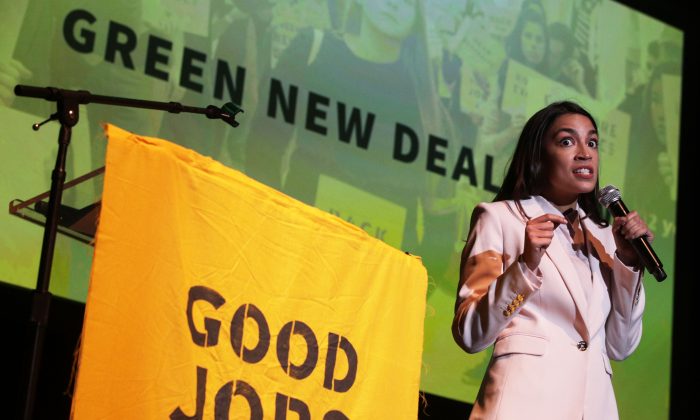 Conference Urges Republicans to Reject the Left on Climate Change

WASHINGTON—Republican office-holders need to stop trying to appease the left on climate-related issues by embracing ideas such as a watered-down version of the prohibitively expensive Green New Deal, participants heard July 25 at the 13th International Conference on Climate Change, hosted by the Heartland Institute in Washington.

For example, Sen. Lindsey Graham (R-S.C.) has been a “tried and true defender of President Trump—nevertheless, I wish he’d defend President Trump on this very important issue,” said James Taylor, a senior fellow at the Chicago-based Heartland Institute.

“Going to the left on climate change is not a winning political issue,” Taylor said, adding that Sen. Lamar Alexander (R-Tenn.), and Reps. Greg Walden (R-Ore.) and Matt Gaetz (R-Fla.) have been reaching out to their political adversaries to achieve a compromise on climate remediation, where no reasonable compromise can likely be found.

“There are still a few Republicans, a few policymakers here in D.C., who have come out supporting, whether it’s a Green New Deal light or some other form of a watered-down version of the GND.”

President Donald Trump has attacked the proposed Green New Deal, which left-wing activists and politicians tout as a way to revitalize the economy and as a necessary step to secure the planet’s future. Critics say it would radically restructure the U.S. economy and wipe out trillions of dollars in wealth.

The Green New Deal will “kill millions of jobs,” the president said earlier this month.

Taylor noted that Graham said earlier this year, “We owe it to the country to have an alternative to the Green New Deal.”

Taylor said the senator is mistaken.

“Lindsey Graham is adopting and accepting the language of the left, and the premises of the Left that we always need big government solutions to solve assorted problems,” he said. This does a disservice both “to climate science but also to the Republican Party” by viewing the issues “through the same big-government prism of the left.”

“The scientific evidence is pretty compelling that we are not creating a climate crisis. The economic analysis shows us that reducing carbon dioxide emissions, especially through government mandates or government mechanisms, is going to dramatically decrease our wealth as a society, and people’s living standards.”

Myron Ebell of the Competitive Enterprise Institute said no compromise with the left is possible over the Green New Deal.

The Green New Deal “should be ridiculed,” he told conference attendees.

“Climate science is not normal science,” Ebell said. “It’s more like science, based on political consensus.”

Although political pundits say the Green New Deal has virtually no chance of becoming law anytime soon, it has become a litmus test for Democrats seeking their party’s 2020 presidential nomination. During recent Democratic Party presidential debates, virtually no one has spoken against the plan, which Senate Majority Leader Mitch McConnell (R-Ky.) has labeled a “destructive socialist daydream” that “would take a sledgehammer to America’s middle class.”

The Senate unanimously rejected the Green New Deal in a vote on March 26. The non-binding resolution was turned down with 57 votes against, and 43 Democrats abstaining by voting “present.” Four Democratic senators–Doug Jones of Alabama, Joe Manchin of West Virginia, Kyrsten Sinema of Arizona, and Angus King of Maine, an independent who caucuses with Democrats—voted with Republicans against it.

The resolution aimed at forcing a transition of the U.S. economy away from burning oil, natural gas, and coal and emitting greenhouse gases from cars and industry which some blame for climate change. It demands that all power come from “clean, renewable, and zero-emission energy sources,” that all buildings in the country be expensively retrofitted to reduce emissions, and that the government spend huge amounts on zero-emissions transportation systems.

The GND also calls for guaranteed jobs, family and medical leave, and paid vacations for all. Its name references Democratic President Franklin D. Roosevelt’s Depression-era New Deal that used huge government spending programs in an attempt to revive the economy.

Sen. Edward Markey (D-Mass.), who championed the plan with Rep. Alexandria Ocasio-Cortez (D-N.Y.), said, at the time of the vote, that Republicans “fail to understand … that the Green New Deal is not just a resolution, it is a revolution.”

The Green New Deal would cost up to $93 trillion, or about $600,000 per American family, according to a study by Douglas Holtz-Eakin, the former director of the nonpartisan Congressional Budget Office, who is now president of American Action Forum.

“The Green New Deal is clearly very expensive,” the report stated. “Its further expansion of the federal government’s role in some of the most basic decisions of daily life, however, would likely have a more lasting and damaging impact than its enormous price tag.”