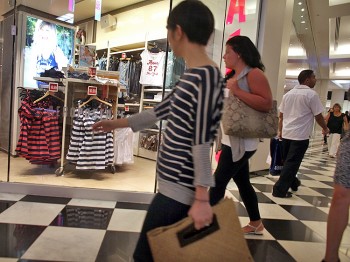 RISING PRICES: People walk through a mall last month in New York City. Fears of stagflation in the U.S. economy are on the rise. Stagflation happens when the economy has slow growth, unemployment has risen to record heights, and prices are rising, or the country is in an inflationary stage. (Spencer Platt/Getty Images)
Business & Economy

Concern About the US Economy

Heide B. Malhotra
View profile
Follow
biggersmaller
Print
It’s midyear 2011, and experts have begun to worry that the United States might not be able to overcome stagflation, which in the long run could lead to deflation.

“With inflation rising and GDP forecasts continuing to be revised downward, fears of stagflation have crept back into the economy, with the economy hovering in a dangerous position between two possible outcomes: recovery or crash,” said Anthony B. Sanders, professor at George Mason University, in a commentary on the Mercatus Center website.

Piping in to deflect the unpleasant news, one respondent to the professor’s comments said that deflation wouldn’t happen because the U.S. Federal Reserve (Fed) will continue to print money.

Well, not so fast. Another respondent suggests that if money is hoarded or saved at a higher rate than the Fed prints it, even if it pumps out money around the clock, deflation can still happen.

Stagflation happens when the economy has slow growth, unemployment has risen to record heights, and prices are rising, or the country is in an inflationary stage.

Inflation happens when prices are shooting up, and people can’t afford to go on a shopping spree because the dollar has become worthless, or the consumer has to pay more for the same product that cost less a few days ago.

Deflation happens when price levels decline, not because of competition, but demand for a product has decreased due to layoffs, reduction in wages, and especially due to continued decline in real estate values. Basically, firms are reducing prices in an effort to get people through the door.

“There’s no doubt about it, the second estimate for GDP growth for 1Q2011 came in with a pale 1.8% rate, down from 4Q2010’s happier 3.1%,” announced the June 2011 Economic Situation report, published by the Mercatus Center, the George Mason University think tank.

Gross Domestic Product (GDP) is the market or monetary value of total goods and services produced in a country during a given year. GDP includes all private (consumer) and public (government) sector spending, including export values minus import values and investments.

Snapshot of What Affects the Economy

“An impaired provision of credit by banks could have severe amplifications on real economic activity and inflation,” a European Central Bank Working Paper suggests.

Deposits and loans are included in the GDP. Bank lending affects corporate ability to buy capital goods, expand, and hire. A slowdown in bank lending has a detrimental effect on a country’s GDP, as spending, which is a component of GDP, is reduced.

“The lack of total loan growth in recent bank results is undeniable. … Banks’ willingness to lend has improved in recent periods, but still remains a constraining factor at this point in time,” stated the June 14 Fitch Inc. ratings report, published on the Politico website.

The industrial production growth rate, another factor in the GDP saga, is the total output from manufacturing, mining, and utilities. The numbers that comprise this statistic are compiled by the Fed. A high industrial growth rate could result in the Fed raising interest rates to address possible inflationary pressure.

The U. S industrial production rate for consumer goods was almost flat, with just a .1 percent increase during May over April. Even the months before May didn’t show much movement in the production growth rate. Motor vehicles and parts showed a steep decline, although not for economic reasons, but because of Japan’s earthquake.

What ails many industries is a “lack of new orders,” suggests the Mercatus Economic Situation report.