Compromise Is a Losing Strategy for Republicans 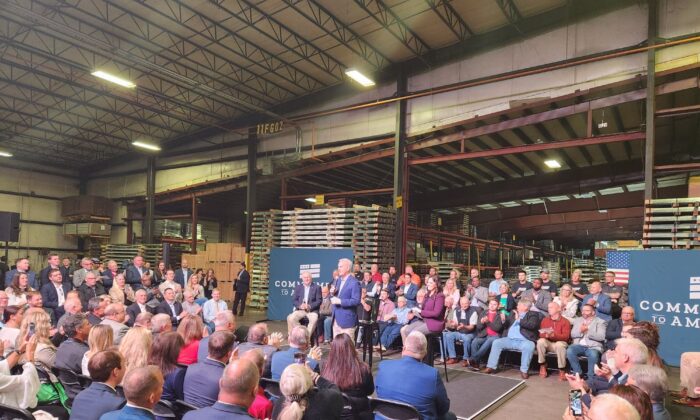 House Republicans across the nation joined House Minority Leader Kevin McCarthy (R - Ca.) for the unveiling of the "Commitment to America" in Monongahela, Pa., on Sept. 22, 2022. (Jeff Louderback/The Epoch Times)

Somewhere during the last seven decades, the Republican Party leadership lost its way, as well as its connection with rank-and-file Republicans. While there have always been “wings” in the party reflected by key leaders during a particular period, the hardening of the current GOP establishment against rank-and-file Republicans has never been quite so widely understood as it is this year.

Let us explore the topic.

Here are some examples of the splits within the Republican Party that have become increasingly wide and acrimonious among the participants:

Republican presidential candidate Barry Goldwater defeated former New York Gov. Nelson Rockefeller for the 1964 nomination. Rockefeller helped the Democrats torpedo Goldwater’s campaign, with the media playing a role eerily similar to their attacks on Donald Trump in 2020. Rockefeller’s primary challenge against Goldwater was a forerunner of the politics of personal destruction perfected by the Clintons in the 1990s, and provided much cannon fodder for the Democrat Lyndon Johnson’s campaign. Western conservatives versus Northeast liberals.

Ronald Reagan had a unique connection to the conservative Republican base of his party, while George H.W. Bush built a resumé of public service as a Washington insider. Bush moderates who controlled the Republican Party resented the upstart Reagan, but a compromise was reached as Reagan selected Bush as his vice presidential candidate to “broaden the ticket’s appeal.”

Bush played the waiting game and got his own chance in the Oval Office but blew his reelection chances by reversing his public statement about “no new taxes,” which ushered in the execrable Clintons to the White House. No doubt Mike Pence thought he’d repeat the Bush scenario while serving as Trump’s vice president (Pence being a Washington insider and “best pal” of former House Speaker—and RINO—Paul Ryan), but that hasn’t quite worked out for Pence after he enraged the Republican base on Jan. 6, 2021.

The battle lines became pretty clear when the Tea Party coalesced in 2009 as a grassroots effort to stop Barack Obama’s left-wing policies, rein in government spending, and cut taxes. GOP insiders like Mitch McConnell began to resent the encroachment of Tea Party supporters into Washington politics and deal-making and used his extensive fund-raising organization to undermine and defeat Tea Party candidates, including one who had the audacity to challenge him directly in the Republican primary in 2014.

Publicly aired “disagreements” between McConnell and Trump have simmered since McConnell’s speech on the Senate floor after the second Trump impeachment trial in February 2021, in which McConnell claimed that Trump was “practically and morally responsible” for the Jan. 6 riots at the Capitol.

McConnell, Pence, and other GOP establishment figures backed numerous candidates during the 2022 Republican primaries who were largely defeated by America First Republicans supported by Trump. In the ongoing tit-for-tat, Trump has gotten his licks in, too. In a social media post last month, Trump suggested that McConnell had a “death wish” because he had voted to approve legislation backed by Democrats.

And that last zinger goes to the heart of the current split between the Republican base and the GOP establishment.

The Democrat Party’s ascendance as the “Party of Government” during the 1960s led minority Republicans to accept a comfortable seat at the tax-and-spend table as compromisers with their Democrat colleagues. Rather than challenge Democrats on conservative constitutional principles and the tenets of the Republican Party platform itself, Republican leaders from the party’s establishment wing sought compromise as their ticket to perpetuation in power (albeit as controlled opposition for the Democrats). Compromise wins Republicans’ “strange new respect” in the Democrat-sympathetic legacy media, think tanks, and academia.

What is little known and not understood is that this is exactly the role that Democrats created for the Republican Party. Republicans, by and large, are bad politicians or, at the very least, are inept and don’t think strategically. On the other hand, Democrats, being the party of government, will do anything to advance their causes (which ultimately leads to more government and less freedom).

Thus, Democrats divined the tactical strategy of “compromise” and have been pushing it relentlessly via their media sycophants for decades: media polls in favor of “compromise” and “bipartisanship”; endless op-eds and commentary about the benefits to all Americans of comity and collegiality and “getting stuff done for the country”; claims that the American people don’t want confrontation, but rather “can’t we all get along”; etc.

When Republicans compromise on any topic, they move the political needle in the direction of the left—toward Democrat political objectives. Democrats never give up their core issues and principles. That’s why members of the GOP establishment are evaluated as merely delivering big government at a slower pace than Democrats do; they never live up to their core pro-constitutional, small government, low tax, and strong national defense principles because they are too eager to compromise them away, having been conditioned for decades by the Democrats and legacy media to do so.

A perfect example of the perpetuation of the compromise philosophy among “moderate” Republicans is the Problem Solvers Caucus, which is the latest Democrat concoction aimed at furthering compromise and moving the national agenda further to the left.

There have been Republican compromisers who have voted in favor of many Democrat-supported initiatives over the years. An example from 2013 was Senate Minority Leader McConnell’s compromise with Majority Leader Harry Reid to raise the federal debt ceiling, end a government shutdown, and essentially give away all Republican leverage on spending priorities to the Democrats.

McConnell and the GOP establishment have also rolled over for Biden and the Democrats. Last year, McConnell et al. caved to Chuck Schumer’s Democrats by giving them yet another emergency debt extension, which opened the floodgates for the democrats’ spending bills this year.

One of those budget-buster Democrat bills was the $280 billion computer chip funding bill, which, along with the $1 trillion“Infrastructure bill” (note how Democrat media outlet CNBC labels the bill as “bipartisan”) and Orwellian “Inflation Reduction Act” that includes $80 billion for the Internal Revenue Service are the root causes for high inflation in the United States these days. These are Democrat spending bills that richly fund Democrat priorities, constituencies, and donors and force Green New Deal policies similar to those bankrupting the Europeans down our throats.

Compromise is a strategy made to keep Republicans in the minority in the U.S. Congress and to hand the White House to the Democrat Party in perpetuity. Compromise by Republicans in Congress means giving up core Republican principles to“make a deal” with Democrats. The result is $30 trillion in national debt and counting, a host of cultural Marxist issues crammed down the throats of traditional Americans, the complete abdication of political leadership in Washington to the Democratic Party, and the implosion of the U.S. economy, military, and society in general that Americans are living in real-time.

Compromising Republicans are worse than Democrats, who at least are true to their socialist principles.