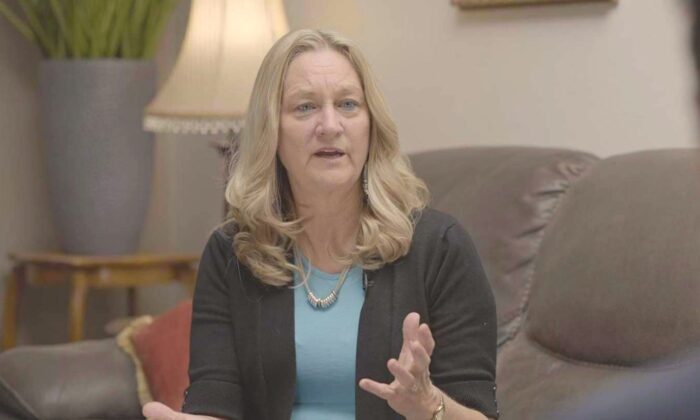 Brenda Lebsack, a teacher of 30 years and a former school board member for Orange Unified School District. (Crossroads/ Screenshot via The Epoch Times)
Education & Family News

Comprehensive Sex Ed Being Taught in California Schools by Outside Contractors: Ex-School Board Member

School districts in California have contracted with outside agencies focused on mental health, tutoring, suicide prevention, and many other topics to provide schools with sex and gender education services, said Brenda Lebsack, a teacher of 30 years and a former board member for the Orange Unified School District.

“A lot of it comes from Human Rights Campaign’s Welcoming Schools [program] that teaches kids: You can choose your gender. When you’re born, parents or doctors just make a guess at your gender by looking at your body parts, but that doesn’t determine who you really are. And you can be both genders, neither gender, gender fluid, or change as you go depending on your feelings.”

“We have a lot of young new mental health workers, counselors being added to our schools because there’s a lot of grant money coming in right now for mental health,” Lebsack told EpochTV’s “Crossroads” program on June 16.

When Lebsack asked these workers how they were trained to define children’s gender identity, they explained that they affirm whatever gender a kindergartner chooses to be and the pronoun the child wants to go by, she said. If a kindergartner is concerned that his or her parents will not like their choice, the mental health worker will keep it confidential and not tell the parents about it, Lebsack said.

“In the meantime, in California, mental health workers or somebody who’s working with the school can actually change a child’s gender category without parent permission.”

The worker then stays in touch with the child in some schools through virtual platforms, or through text messaging, Lebsack continued, giving an example of Planned Parenthood, which may provide children with a text number to be used to talk about gender identity.

Lebsack sent a text message to such a number pretending that she was a child who was scared about puberty and unsure of its gender. In response, she received a message proposing 10 gender options to choose from.

“One of them was ‘make up your own gender,’” she said.

The worker who responded to her also put her in touch with a chat space for people ages 10 years to 45 years, proposed she go on puberty blockers, and gave her an option to make an appointment with the agency to explore her problem further, Lebsack said. She did not enter that chat space but said that she had seen chat spaces where minors are mixed with adults and she thinks that it “is clearly grooming [and] it’s an opportunity for pedophiles.”

“Kids are being reached out [to] behind even the teachers’ back [and] a lot of administrators and superintendents don’t even know,” Lebsack said.

“They just assume: ‘Oh, a suicide hotline. Oh, a mental health hotline.’ But they don’t understand how these mental health workers are now being trained, especially the young ones.”

Teaching about gender identity creates a dilemma for kids and a lot of them are “caught up in that, reasonably so, because puberty is a very awkward time,” Lebsack said. Kids want to escape from that, especially girls who are often horrified by their puberty, she added.

Workers tell kids that if they are unsure about their gender they can start taking puberty blockers, which gives them more time to decide, Lebsack said.

It is appealing to girls in particular as they may think that they can just become a boy after taking a pill, she said.

But if parents do not agree with the school’s approach, then in California, they may be accused of spiritual abuse of their kids, Lebsack said. “[Spiritual abuse] means using religion to justify rigid gender ideology such as ‘gender is based on biology.'”

“The school [then] could call [Child Protective Services], and [the parents] could have their child taken away.”

“Hormones determine our stability, and puberty is a tumultuous time anyways,” Lebsack said. This type of hormone treatment may impact kids’ ability to cope, their cognitive development, and even sterilize them, she explained.

Puberty blockers may cause depression and other emotional disturbances related to suicide, according to the American College of Pediatricians (ACPeds). One commonly prescribed puberty blocker in America “has also been associated with, and may be the cause of, many serious permanent side effects, including osteoporosis, mood disorders, seizures, cognitive impairment and, when combined with cross-sex hormones, sterility,” said ACPed’s website.

The American Academy of Pediatrics (AAP) stated on its website that puberty blockers are reversible and can be used in youth with gender dysphoria until 16 years of age so the child has more time “to explore gender identity,” but it also warns about risks associated with taking puberty blockers.

“Delaying puberty beyond one’s peers can also be stressful and can lead to lower self-esteem and increased risk-taking,” the AAP’s website said. “Research on long-term risks, particularly in terms of bone metabolism and fertility, is currently limited and provides varied results.”

Dr. Lawrence Tabak, acting director of the National Institutes of Health, acknowledged that “there are no long-term studies on the risks associated with the off-label use of puberty blockers by minors” when questioned by Sen. Marco Rubio (R-Fla.) during a Senate hearing in May, according to a statement.

“All of the research in this space is observational. We do no interventional work,” Tabak said at the hearing.

An observational study does not test any potential treatment and researchers observe the health outcomes of participants who undergo normal treatment, whereas an interventional study tests the outcome of a particular therapeutic treatment or procedure.

Rubio also stressed during the hearing that the use of puberty blockers and hormone therapy in minors has not been approved by the Food and Drug Administration.

Funding to hire external entities to provide schools with sexual education services comes from governmental sources on either the federal or state level, which means that taxpayer money is used to pay for these services, Lebsack said.

The Centers for Disease Control and Prevention provides funding for sexual education to Advocates for Youth which, along with the AAP, affirms various gender categories for children, including “gender creative, meaning that a child can make up their own gender,” Lebsack explained.

Moreover, national sexual education standards for 2020, which many states follow, were written by Advocates for Youth, Lebsack said.

Advocates for Youth manages “Amaze,” an organization that produces videos that are part of the sex education curriculum, Lebsack said. The videos are available worldwide in many languages and they teach kids that gender is based on a child’s feelings, that a child can choose its gender, and that gender fluctuates, Lebsack explained, adding that Amaze videos also encourage children to explore their sexuality at any age, which can also be fluid.

When she was a school board member in California, Lebsack said, a local hospital offered mental health services to 20,000 students in the district. The hospital had a pediatric gender clinic and its workers were gender transitioning kids socially at age 5 and medically at age 9, Lebsack said. State grant money made the initiative possible, she explained.

Educating children about transgender identities is also included in the universal pre-school program that is part of President Joe Biden’s Build Back Better plan, Lebsack said.

It incentivizes kids and puts pressure on them to explore different gender identities because no one wants to be an oppressor, she continued.

Critical race theory is based on the Marxist archetype of class struggle, which pits two social classes—the bourgeoisie and the proletariat—against each other to divide and conquer, but CRT divides people into the oppressors and the oppressed based on their skin color or gender.

Lebsack said she talked to many parents who disagree with the prospect of their children falling prey to gender ideology, and found them torn apart.

“It’s heartbreaking,” she said. “It’s destroys a family, and it destroys kids.”