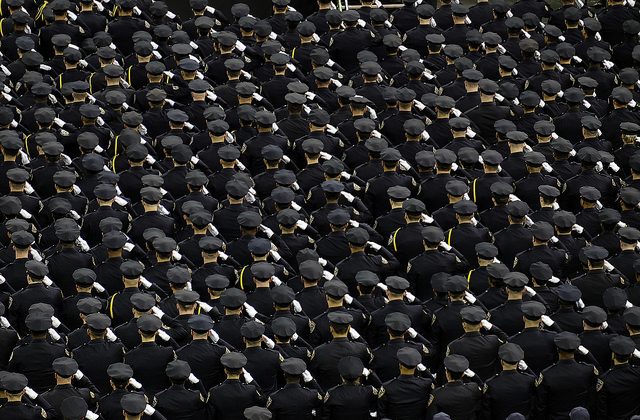 Complaints Against NYPD Rise Despite Change in Tactics

UPDATE: Linda Sachs from the Civilian Complaint Review Board reached out to clarify that the 7.3 percent increase this year is “an illusion” because Hurricane Sandy had displaced CCRB offices and disabled the 1-800 complaint line for some time in 2013. As a result CCRB saw a significant decline in complaints for two out of six months in 2013 that the 2014 complaints were compared to below.

The Civilian Complaint Review Board (CCRB) is an independent agency which investigates complaints of police officer misconduct.

The total annual complaints to the board dropped by 40 percent from 2009 to 2013. But the number of complaints is growing this year despite major changes adopted under Mayor Bill de Blasio to the way the New York Police Department interacts with civilians. This applies especially to the police department’s stop-and-frisk tactic, which has been drastically deemphasized under de Blasio.

The number of times police officers stopped, questioned, and frisked people is down to 27,000 so far this year, compared to the 160,000 stop and frisks conducted last year. Stop- frisk complaints made up between 25 and 31 percent of the total complaints to the CCRB every year since 2009.

During the administration of Mayor Michael Bloomberg, the police department relied heavily on stopping, questioning, and frisking people without a warrant. That policy came under fire and the department has been reducing the number of stops every year since 2011. De Blasio, who has opposed the misuse and overuse of stop and frisk, has said that reducing the number of stops would begin the process of restoring frayed relations between police officers and the communities they serve.

Shortly after taking office de Blasio dropped a legal challenge to a City Council bill that would install an inspector general at the NYPD, who would ensure that stop and frisk and other policing tactics were used legally.

Seven months into his administration, the mayor is yet to appoint the head of the CCRB.

“The Civilian Complaint Review Board provides an indispensable service for New Yorkers who feel they’ve been victims of misconduct, and the mayor will appoint a chairperson to lead this critical board in the near future,” the mayor’s spokeswoman, Marti Adams, said in an emailed statement.

As of July, the board has 2,662 open cases. Last year, 14% of the complaints filed were found to have at least one substantial allegation after a full investigation.

The NYPD did not respond to a request for comment.