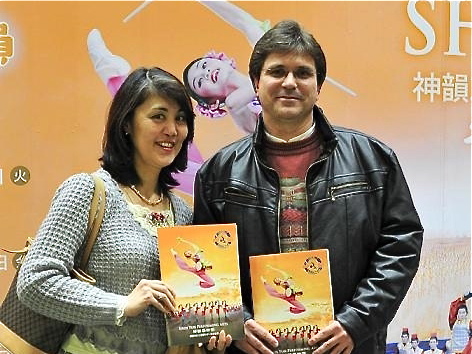 NAGOYA, Japan—On the evening of Feb. 17, Shen Yun Performing Arts New York Company staged its fourth show in its tour of Japan at Nagoya Congress Center. The benevolent messages of Chinese culture, paying homage to the Gods, acceptance of one’s life and emphasis on virtuous deeds, have touched countless people in attendance. In the audience were Mrs. Grace Oseki and her husband. They were watching Shen Yun for the first time, appreciating the underlying messages of the show.

Mrs. Oseki, owner of Aichi Technology and Education Center (ATEC) commented: “I felt the underlying message, and that is, Gods will help good people. This is excellent, very touching. Although many people don’t believe in Gods anymore nowadays, Shen Yun has successfully portrayed the theme of good people under the grace of Gods.”

Mrs. Oseki said: “The entire show was very impressive. Overall it was very beautiful, and the dresses were gorgeous. I love all the different programs. The dancing was elegant, very exquisite. The program Sleeves of Silk was marvelous.”

Classical Chinese dance uses what are known as “water sleeves” for some of its loveliest expressions. Acting as extensions of a dancer’s arms, these sleeves linger in the air long after a movement is finished, states the program booklet.

Mrs. Oseki added that each legend depicts the divine Chinese culture, and Shen Yun portrays a very good historical understanding of these legends.

Nagoya city council member, Mr. Kinjo Yutaka said that Shen Yun was simply perfect. “Everything was perfect! The dance, the music, the songs and the backdrop were all amazing!

“Every dance was spectacular. The costumes were divine. The moving backdrop and the performers moved seamlessly together as a whole, making the stories easy to understand,” he said. “The voices of the tenors and sopranos were powerful. One could feel the power.”

Mr. Yutaka was born in Okinawa, where culture from ancient China has been preserved. He thought it was why he could easily relate to the principles of benevolence, justice, propriety, wisdom, and respect for the Divine. These are common underlying themes throughout the show, as well as veneration of gods and Buddhas compassionately saving the world’s people.

A karate master himself, Mr. Yutaka could imagine the amount of hard work and training behind the scenes. “I wish Shen Yun more success!” he said.