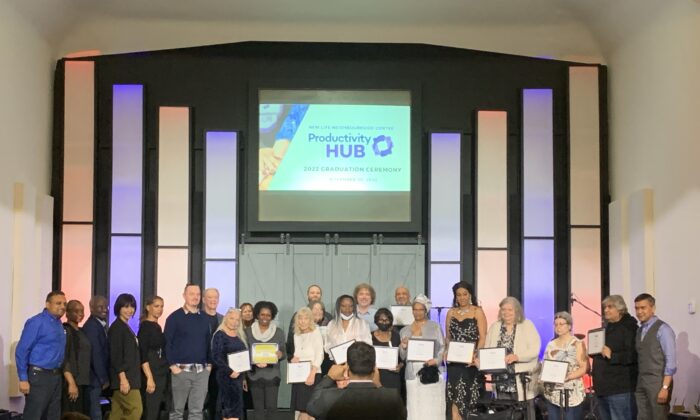 OSHAWA, Ont.—Inside a small Seventh-day Adventist church tucked away in Oshawa’s southeastern side on Nov. 30, 10 people stood on a stage and held diplomas in one hand while raising the other high in the air in a gesture of triumph.

They weren’t graduating from high school, college, or university. They were celebrating how a small initiative—run by three Oshawa residents with the help of community partners—had taken them from a state of poverty, near-homelessness, or despair to life situations in which they were able to earn an income and have hope for a better future.

Some of the graduates have rebounded from financial situations that threatened their homes and livelihoods to start their own businesses. Lewis Campbell recently started her own cleaning business, while Pam Meddings started a T-shirt business.

So far, 32 individuals have participated in the program, 13 of whom have found employment and nine are working on launching new businesses, while others are pursuing further education or volunteer work.

Richard Kerr, an Oshawa city councillor, told The Epoch Times that the HUB, not being a municipally-operated initiative, is an example of how a community can use the resources at its disposal to create something that many often believe should be the responsibility of some level of government.

Kerr calls it “boots-on-the-ground results,” something the HUB’s program manager, Eduardo Flores, believes has the power to bring a community together.

“This is the community’s work. We can’t do this by ourselves,” Flores told The Epoch Times, noting that the HUB’s management team is made up of just three people including himself.

Flores said the initiative serves as a stepping stone for participants between recovery and economic independence.

Poverty has many faces, he said, and sometimes those who come to the HUB appear stable, but are just one lost job away from living on the streets.

“Homelessness doesn’t really have a face,” he said.

The HUB’s facilitators believe “employment readiness” and “productive pursuits” are among the core needs of individuals who have found themselves in impoverished or underprivileged life situations.

They offer a 12-week workshop called the Self-Empowerment and Livelihood Improvement Project, aimed at guiding their HUB learners to “look inwardly, challenge existing mindsets, and develop a renewed sense of hope.”

The workshop is followed by “one-on-one coaching and mentoring” to help participants take their first steps toward rebuilding their lives.

Then comes a 14-week practical skills training workshop, during which participants prepare for employment or starting a new business.

Those who complete the program are awarded a diploma acknowledging their work during a graduation ceremony attended by friends, family, and supporters.

Seventeen HUB learners graduated on the evening of Nov. 30, 13 of whom attended the ceremony.

A visiting pastor took the stage shortly before the graduates were awarded their diplomas to recite a famous Chinese proverb:

The graduates ascended the stage one by one and accepted their diplomas from Flores and the HUB’s program director, Ann Thompson. Some of them gave speeches.

“This is an example for my kids,” said one while fighting back tears.

Another detailed how the HUB had prevented them from resorting to seeking mental help support.

“When I was at the end of my towel, I tied a knot and hung on,” said yet another.

One of the graduates is a second-round cancer patient, but exudes a vibrancy that makes it hard to believe.

“Our mission here is to give individuals a fair chance at succeeding in life,” Thompson said during the graduation ceremony.

Underlying the entire initiative is an idea—that improvement is achieved most effectively through one’s self. The HUB simply provides the stepping stones toward achieving this.

“Without hope, there is no motivation, and that goes for anybody in life,” Kerr said in a speech at the ceremony.

“Now that you have that hope and you started working through this program, you start to think, ‘I can do this.'”