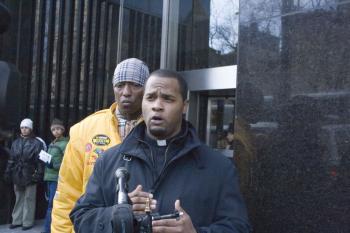 Community leaders the Rev. Omar Wilks and Richard Kirkpatrick demand justice for Sean Bell who was fired at 50 times and killed in 2006. (Diana Hubert/The Epoch Times )
US

Diana Hubert
View profile
Follow
biggersmaller
Print
NEW YORK—Two community leaders are still upset over the shooting of the unarmed Sean Bell in 2006. At City Hall on Tuesday, the two, the Rev. Omar Wilks and Richard Kirkpatrick, demanded the firing of officers involved in the shooting and a halt to the “character assassination” of Bell by some City Council members and a police union head.

This Monday, City Council voted to rename the street where the 23-year-old father of two died, “Sean Bell Way.”

“I applaud the City Council for a street name change. [Bell] was a symbol and sent shockwaves throughout the country. I want to see the mayor and the police commissioner immediately fire those police officers,” said Wilks, Pastor of Unison Pentecostal Church.

This Monday, Mayor Bloomberg acknowledged he would approve the proposed street names presented by the Council, noting that it is the Council’s prerogative to make such decisions.

Three years ago, on the night of his bachelor party, Bell and two friends, all black Americans, were at shot by police 50 times outside a club in Jamaica, Queens. The officers, two of which were black American themselves, mistakenly believed that Bell and his friends had a gun. The officers said that it was only after Bell hit an unmarked police vehicle that they opened fire.

Shortly after, large protests erupted among those upset by the excessive use of force and the possible involvement of racial profiling.

In spring of 2007, three of the five police officers were charged with manslaughter, and assault but were later acquitted of the charges on the premises of forensic analysis and because the two surviving victims stories’ did not seem to add up.

The Rev. Wilks said that Bell’s death had a positive impact. “It had a national impact. People came to question police practices,” he said.

He also criticized what he called the “assassination of Bell’s character” by some City Council members. He also referred to the comments by Michael Palladino, the president of the Detectives’ Endowment Association.

According to the New York Post, Palladino said of Bell: "His claim to fame is that he got too intoxicated and got behind the wheel of a car, struck a police detective, tried to run down others, and lost his life as a result … Sean Bell had a criminal record that showed us he was mixed up in the drug business in Jamaica, Queens. Why doesn't the Council call this what it is?"