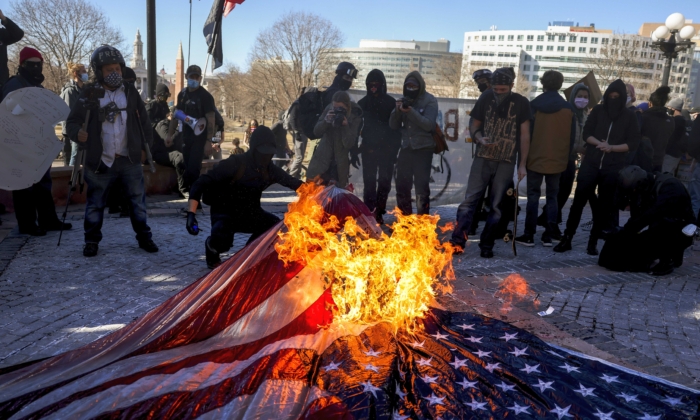 Members of the Communist Party USA and other anti-fascist groups burn an American flag on the steps of the Colorado State Capitol in Denver, Colo., on Jan. 20, 2021. (Michael Ciaglo/Getty Images)
Viewpoints

It’s the 1930s all over again. American communists are now treating the Chinese Communist Party (CCP) with the same slavish reverence once reserved for Stalin and the mighty Communist Party of the Soviet Union (CPSU).

The Communist Party USA (CPUSA), once shamelessly subservient to the CPSU, has now completely transferred its loyalties to the CCP.

On March 10, a high-level delegation from the CPUSA met with senior CCP officials in Beijing. According to an article on the CPUSA website, the International Department of the CPUSA and the International Commission of the Central Committee of the CCP “held a bilateral meeting to celebrate and discuss the 100th anniversary” of the CCP.

Despite being a small party (estimated 5,000 members), the CPUSA delegation was treated with considerable respect and interest by CCP officials.

Delegate Tony Pecinovsky, a CPUSA organizer and labor historian from St. Louis, gave the CCP officials an overview of 100 years of party history.

Comrade Maicol David Lynch from New York explained to his Chinese hosts that “most young people have a positive attitude toward socialism, especially after the political election campaigns by Bernie Sanders. The CPUSA has attracted a lot of interest from young people and increasing numbers of young people are applying for membership.”

Comrade Zhou, the CCP’s international secretary, recounted a century of U.S.–China relations: “We remember how Americans came to help us during the War of Japanese Aggression, we remember the solidarity that the CPUSA showed the CPC during this time of resistance.”

Comrade Yinchun, a member of the CCP’s central committee and international commission, boasted about China’s recent eradication of extreme poverty: “Our socialist market economy has lifted millions out of dire poverty, and by 2035, they will have achieved an even higher standard of life.”

The CPUSA also contributed to the Wanshou Forum on Feb. 28, 2019, in Beijing, on the theme of “Building a Community with a Shared Future for Mankind and Development of Socialism in the World.” The address was prepared by Cambron but because of illness, it was delivered by Ohio comrade Aleena Starks.

“Thank you for inviting our Party to participate in learning about the many important developments in your country. I bring greetings from our Party’s National committee, wishing you all the best in establishing socialism with Chinese characteristics.”

Then, CPUSA Chairman John Bachtell and New York comrade Carol Widom also toured China from May 26 to June 3, 2018, in a visit that included a conference on the 200th anniversary of Karl Marx’s birth.

Some CPUSA members work in China promoting the CCP’s propaganda line. Their copy is reminiscent of 1930s Western sycophants and their unabashed praise for Stalinist Russia’s great achievements.

Houston communist Ian Goodrum is a writer and digital editor for China Daily in Beijing.

In October 2018, Goodrum wrote in the CPUSA’s People’s World:

“China and other countries governed by communist parties stand alone in that they have been able to chart their own course and resist imperialist aggression. They have not been subject to the same stringent limitations which keep so much of the developing world languishing in poverty and debt, limitations following the same rules of profit extraction analyzed by Marx in Capital.”

Boston activist Dylan Walker, a member of the Walden Workers Club of the CPUSA, is a graduate student studying international politics at Beijing Language and Culture University.

On Oct. 14 and 15, 2017, comrade Walker and fellow Boston CPUSA member Wadi’h Halabi participated in the 8th World Socialism Forum of the Chinese Academy of Social Sciences in Beijing.

“The theme of the international gathering focused on the 100th anniversary of the October Revolution in Russia and applying lessons from it to an examination of the ‘Temporal Characteristics of the Great Transformation Era, and Socialism with Chinese Characteristics,'” according to the Boston CPUSA,

In the same month, CCP mouthpiece the Global Times released an interview with Walker that, according to the Hong Kong Free Press, was viewed 78,000 times on Chinese video platform Miaopai.

In the interview, Walker says he became inspired by former CCP leader Mao Zedong’s thinking during his first visit to China in 2012:

“I think communism is the most advanced and the ideal social and political system. We just want to make sure everyone can get access to basic welfare and rights. … When I came to China for the first time, I bought versions of the ‘Quotations from Chairman Mao’ in Chinese and English. I read it almost every day after going back to the U.S. I kept it with me during class and I read it when I had time after classes. If I hadn’t learned the quotations, I wouldn’t have joined the Communist Party USA. So, Chairman Mao and the Communist Party of China have a special place in my heart. …

“The CPC now is admirable for me. Especially since President Xi Jinping took office. The corruption crackdown has swept nationwide. … Every time when I browse the website of the People’s Daily and Global Times, I can see such reports almost every day as corrupt officials get arrested. … What’s terrible is that a communist might have doubts towards communism and socialism, and then loses this belief and faith. Just like what President Xi said before, some communist members lack ‘calcium,’ that is lack of belief in communism and Marxism.”

Phoenix communist Rob McElwain reported in an October 2017 Facebook post that Halabi also enjoys a close relationship with the CCP:

“Wahd’i has been a special consultant to the government of China the past dozen years. He travels to meet with high level personnel from the Communist Party of China to advise them on problems that loom in governing while maintaining the principals of not just Marxism, but the roots of power, the people.”

The March 2021 CPUSA delegation to China committed to working in “the interest of world peace, international solidarity, and cooperation rather than international confrontation.”

In communist terminology “world peace” simply means an absence of resistance to world Marxist-Leninist domination. What would the CPUSA do if the United States got into a full-scale military confrontation with China?

An advertisement for a CPUSA reading group at the Niebyl-Proctor Marxist Library in Oakland, California, on Dec. 4, 2010, answered the question this way:

“The United States government has been committing direct acts of provocation against China’s economy, and other aspects of its society, including its military. … If these confrontations are allowed to become full-blown, it … will demand from all of us new energies to struggle on yet another—perhaps the biggest—domestic front against U.S. Imperialism.”

In other words, the CPUSA would possibly fight for the CCP on U.S. soil.

If the Biden administration is truly serious about uncovering dangerous internal enemies in this country, it need look no further than the CPUSA.