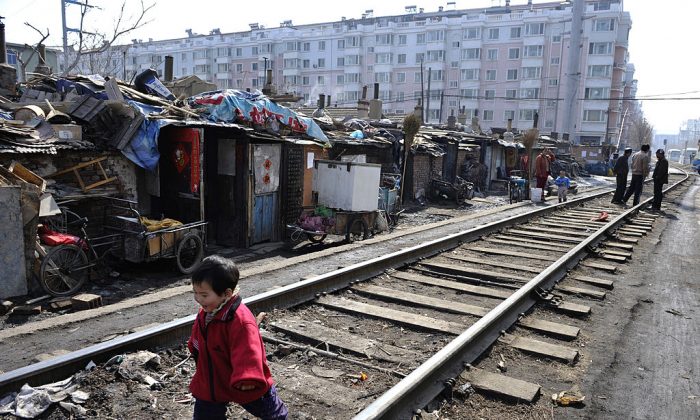 A child plays along a railway at a shanty town where residents will move into low-rent apartments provided by the government in Shenyang of Liaoning Province on March 11, 2009. (China Photos/Getty Images)
China

China has low-income housing projects, but it too often happens that instead of going to the poor, the properties end up supplementing the already-generous income of state and Party officials.

Those attempting to get a flat that can cost as little as nine dollars a month often find themselves scammed and sidelined by higher bidders. In some cases, the apartments go to white-collar professionals and others not legally entitled to the units.

On Sept. 13, The Paper, based in Shanghai, reported that a villager in southwest China’s Sichuan Province paid 80,000 yuan (about $12,000) to the local chief as a “security deposit” that would supposedly get him a unit. Another paid 25,000 yuan. Village officials and other scammers would provide authentic-looking stamps to mimic higher authorities in the deals to the gain the trust of their victims.

Sichuan police said that from 2013 to 2016, a network of local scammers have cheated villagers in at least 60 villages out of 10 million yuan (about $1.5 million).

As villagers were cheated into thinking that they needed to pay deposits, the projected flats built for them were being populated by other clients of the scammers. By paying higher fees and rent, residents could get housing even if they did not possess the legal household registration.

Netizens were not surprised at the news, as seen in online comments to The Paper’s article.

“This case is not limited to Sichuan. There are cases like this everywhere in the country,”  a web user called “Diaoyudao belongs to Annie” wrote.

A Sichuan user summed it up it bluntly: “Cheap government housing is not for the poor.”

Not the Intended Residents

In January 2011, the state-run Xinhua news agency reported that 607 low-income rental housing units in Heqing County, Yunnan Province, ended up in the hands of party officials working at the local health, education and family planning bureaus. The residents included doctors and school principals.

That May, a report by Chinese news site NetEase shed light on officials in Cangzhou County of Hebei Province in northern China would taking low-income apartments for themselves.

Two low-income residents, surnamed Li and Tao, told NetEase of how cars parked inside their apartment complex would drive out ahead of any inspection by local authorities. They noticed that a security guard working at the complex’s gate would call the owners residents ahead of time to warn them of the checks.

Wang Sixiang, a Chinese economic scholar and historian, said in an opinion article published this month on Hong Kong’s Oriental Net that only a small number of low-income people would benefit from government housing until proper supervising bodies were set up to investigate and punish the corrupt officials behind the development and rental scams.

The last four years has seen a nationwide anti-corruption investigate and discipline hundreds of thousands of officials for their misdeeds.

You Zhixiong, a housing security director in the province of Hunan Province official, colluded with six other Party officials to set up a low-income housing project with real developers in which he received 4.5 million yuan (about $675,000) in bribes.

In August, the China Discipline Inspection Daily, a publication run by the Communist Party’s anti-corruption agency, reported that You had been sentenced to five years in prison.