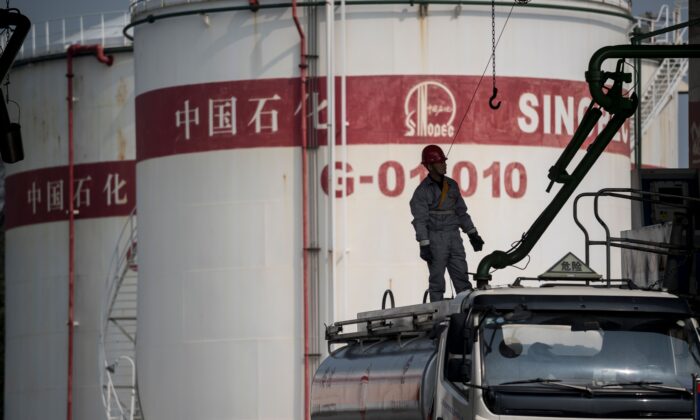 A man works in a filling station of Sinopec, China Petroleum and Chemical Corporation, in Shanghai on March 22, 2018. (Johannes Eisele/AFP via Getty Images)
Energy

US Sold Nearly 6 Million Barrels of Oil From Reserves to China, Records Show

The Biden administration has sold nearly 6 million barrels of oil from the U.S. Strategic Petroleum Reserve to an entity tied to the Chinese Communist Party, records show.

From September 2021 to July, the Department of Energy (DOE) has awarded three crude oil contracts with a combined value of roughly $464 million to Unipec America, the U.S. trading arm of Chinese state-owned oil company Sinopec, according to a review by The Epoch Times of the DOE documents. A Chinese firm with ties to Hunter Biden had invested in the national oil giant.

The sale would tap 5.9 million barrels in total from the strategic reserve (SPR) to export to the Chinese firm. The latest contract, revealed on July 10, was for 950,000 barrels sold for around $113.5 million.

The two most recent sales to Unipec came out of an emergency drawdown of the U.S. oil stockpile, initiated under President Joe Biden on March 31 in what he said would offset the loss of Russian oil in global markets and tame rising fuel costs at home.

The Unipec contracts have been subject to heavy criticism in recent weeks, especially because of the firm’s connections to the president’s son. With Americans nationwide still reeling from elevated gas prices, the selling of oil reserves to foreign adversaries such as China is at odds with U.S. energy and security needs, Republican lawmakers and analysts have said.

“Biden is draining our strategic reserves at an unprecedented rate. This is an abuse of the SPR, far beyond its intended purpose. Sending U.S. petroleum reserves to foreign adversaries is wrong, and it undermines our national security,” Rep. Clay Higgins (R-La.) told The Epoch Times.

What the United States should do, he says, is to “unleash American energy production and ensure that our strategic reserves are stocked and able to meet the demands of a national emergency.”

The oil auction is price-competitive, meaning contracts are awarded to the highest bidder. Unipec, a consistent participant in previous U.S. crude oil sales, secured 1.9 million barrels over the past three months through two contracts it won on April 21 and July 10.

Sales to Unipec appear to fall in the lower price range among the successful buyers, a review of DOE contracts by The Epoch Times shows. For the 2021 contract, Unipec paid about $63 for each barrel, about $7 lower than the trading price at the time, and more than $2 short of the highest price from other buyers in the sale.

The amount of oil in the SPR has seen a steep decline over the past year, more notably since Biden, blaming Russia’s Ukraine war for the “price hike at the pump,” in March ordered a withdrawal at a rate of 1 million barrels per day for six months to curb gas prices. The planned sale of about 180 million barrels marked the biggest drawdown in the reserve’s more-than-four-decade history and is set to cut the U.S. backup oil supply by about a third.

The inventory stood at 474.5 million barrels as of July 22, marking a 34 percent drop from its peak of 726.6 million, and some 90 million lower than the level in late March.

The DOE on May 5 announced a “long-term buyback plan” to repurchase 60 million barrels in fall through “a competitive, fixed-price bid process.” The delivery date, the DOE said, will take place “in future years when prices are anticipated to be significantly lower,” likely after fiscal year 2023. More buybacks would follow after this first tranche of purchases, it added.

But releasing oil reserves at this magnitude carries risks, according to Abhi Rajendran and Robert Johnston, two research scholars on global energy policy at Columbia University. For one, there’s no guarantee that oil prices will fall when the government moves to refill the stock. Further, the diminution of oil supply may cause the market to price in a greater premium for wars and other supply shocks, resulting in higher prices for longer, they said in a Q&A on April 1.

On Capitol Hill, Republican lawmakers have been watching the oil sales with growing alarm. A total of 206 House Republicans voted on July 20 in support of a legislative amendment aimed at preventing the Biden administration from exporting petroleum to entities with Chinese Communist Party ties.

“It does not make sense that we are using our already depleted energy supplies to help China build up their own strategic reserves,” Rep. David Valadao (R-Calif.) said in a speech rallying support for the proposal.

China is the world’s largest importer of oil. As the West turns away from Russian oil due to the Ukraine war, China has been quietly snapping up Russian resources at steep discounts. From March through June, it spent more than $25 billion on Russian oil, gas, and coal, nearly doubling the amount from the year-earlier period, the latest customs data show. The sales volume propelled Russia to become China’s top oil supplier for two straight months from May, displacing Saudi Arabia.

The GOP-led measure was overruled after 219 Democrats in the House unanimously voted against it.

The same day, 20 Republican members on the House Committee on Oversight and Reform wrote (pdf) to Secretary of Energy Jennifer Granholm requesting an immediate briefing and all documents related to the administration’s decision to sell U.S. oil reserves. They noted that Sinopec, the parent organization of Unipec, has been linked to the president’s son Hunter Biden, through the state-backed Chinese private equity firm BHR Partners, which became a stakeholder of Sinopec in 2014.

Hunter served as a founding board member of BHR from 2013 through April 2020. His firm Skaneateles also held a 10 percent stake in BHR, which his lawyer said has been divested as of November 2021. On BHR’s 2021 annual report released in June, however, Skaneateles was still listed as a shareholder.

“As if Biden couldn’t have bungled this energy crisis any more, this latest development of sending our strategic petroleum reserves to a Chinese oil firm connected to Hunter Biden reaches a new low,” Rep. Byron Donalds (R-Fla.), who signed on the letter, told The Epoch Times.

“For one, this administration should have never tapped into these reserves. Second, these reserves should have never left U.S. shores, and third, the U.S. shouldn’t be doing deals with firms connected to the president’s son,” he said, adding that the Biden family’s “continued compromising actions require strict oversight from Congress.”

Rep. James Comer (R-Ky.), the ranking GOP member of the House Oversight Committee who spearheaded the letter, noted that previous inquiries by Republicans to the DOE about the oil sale had gone unanswered.

“Under no circumstances should the Department of Energy be making decisions which financially benefit Hunter Biden or any of the Biden family’s business partners,” he told The Epoch Times.

“If Administration officials continue to ignore meaningful oversight,” Republicans will “use the gavel to get answers in January,” Comer said, in reference to the expected swing to a Republican majority in the House in the November midterm elections, which would hand GOP lawmakers subpoena power as chairpersons of the chamber’s various committees.

“The American people need answers to determine if this is another attempt by the Biden family to peddle access to the highest levels of government to enrich themselves.”

“The Biden White House obviously didn’t see a problem with loading millions of barrels from our strategic reserves onto tankers bound for foreign countries, which likely explains why they don’t see a problem selling our emergency crude oil to a Chinese gas company with ties to Hunter Biden’s investment firm,” he told The Epoch Times.

Ian Sams, a special assistant to Biden and spokesman for the White House Counsel’s Office, responded to the Republican claims on July 22, calling them “ridiculous and false.”

The DOE is “required by law to sell it ‘in a competitive auction to the highest bidder,’ regardless of whether that bidder is a foreign company,” he told Fox News, noting that the Trump administration, in 2017, also sold a half-million barrels of crude oil from the reserve to China’s state-run PetroChina International through the same “competitive bidding process.”

Sams also stressed that Biden “had no personal involvement in this process whatsoever.”

But Sams’s statement may not have presented the full picture, according to Daniel Turner, founder and executive director of Power the Future, a nonprofit group advocating for energy workers.

“The White House has pushed back as saying we have sold in the past to the communist Chinese. And that is true. We sold when our SPR was nearly full and oil was not at record highest and the world was at relative peace,” he told The Epoch Times. “Times change, and thanks to this president, they have not just changed but become worse, and our policies must change with them.”

DOE officials didn’t respond by press time to a request by The Epoch Times about its buyback plan and Republican lawmakers’ concerns.