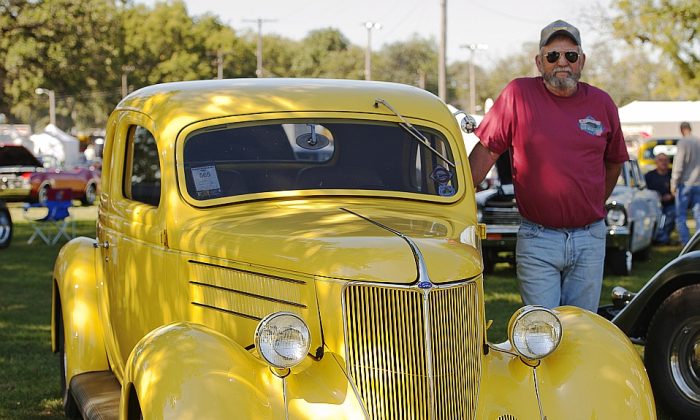 Cat Rooney
Cat Rooney is a photographer based in the Midwest. She has been telling stories through digital images as a food, stock, and assignment photojournalist for Epoch Times since 2006. Her experience as a food photographer had a natural expansion into recipe developer in 2012, thus her Twitter handle @RecipeGirl007.
View profile
Follow
biggersmaller
Print

Hot rods are as American as apple pie, and they have been around for 80 years. They can be a restored classic or a modified auto, rustic or custom flame painted, and low down to the ground or rooftop chopped, as shown by the photo gallery of hot rod car shows.

Any hot rod enthusiast will tell you that the birthplace of these cars was California during the Great Depression in the 1930s. Young men took parts from Model T and A automobiles and made racing cars to drive in dry riverbeds. They got a reputation for being daredevils and rebels.

After World War II, drag strips were built to race these unique personal statement vehicles. Later, there was a movement away from racing toward family-oriented activities such as public hot rod shows.

If you attend a hot rod show today, there are four terms to have under your belt in order to distinguish what type of vehicle you are looking at. These definitions are from Roadkill Customs’ glossary of terms.

1. Antique: 25 years old or older, in stock, unmodified, or restored to original condition.

2. Classic: a fine or unusual motorcar built between 1925 and 1948. It is distinguished by its fine design, high engineering standards, and superior workmanship. Only certain auto brands are considered true classics.

3. Hot Rod: modified vehicle to improve its appearance or performance or both.

4. Rat Rod: a style of hot rod that imitates the early rods of the ‘40s–‘60s. They have an unfinished appearance with just the bare essentials to be driven.

When gearheads talk, there is a whole world of slang often consisting of terms commonly used in ordinary society but with different meanings. These 10 definitions are according to the Hot Rods & Classics website.

2. Chopped: a hard-top car that has had its roof lowered.

5. Grocery Getter: a mild street rod that is used for a run to the store and back.

6. Gutter: a rod with its interior removed.

8. Slammed: a vehicle or hot rod that is as close to the ground as possible without actually touching.