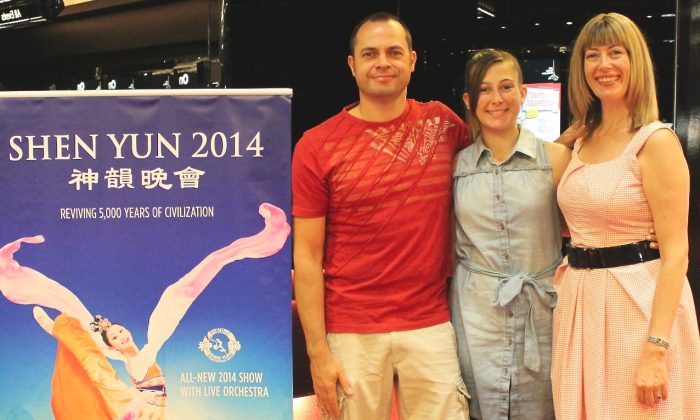 Committee for Geelong CEO: Shen Yun is a ‘Unique blend’ of Old and New

With an emerging Chinese community in Geelong, Mrs. Casson said, Shen Yun, the world’s premier classical Chinese dance and music company, would be important for many of them, particularly students, to see. “Definitely, to reconnect with their [true] culture,” she said.

“If I could get my class to go next year, that would be a very cool field trip,” Mrs. Casson’s daughter said.

“In 2006, a group of leading classical Chinese artists came together in New York with one wish: to revive the true, divinely inspired culture of China and share it with the world,” the Shen Yun website says.

“The music was fantastic, and the narration by the couple who interacted with the audience was terrific,” she said. “There was humour in the whole performance as well, which I really enjoyed because I didn’t expect that. It was a good inclusion.

“The colour was magnificent, the agility of the dancers, the professionalism of the performers was absolutely outstanding and exceptional. It’s such a shame that it can’t be seen more widely, so we’ll definitely be interested in coming back next year to have another look at a different performance.”

“China was once known as Shen Zhou, The Divine Land. This profound name describes a land where deities and mortals coexisted, and a belief that the divine transmitted a rich culture to the people of the earth,” the website explains.

“For thousands of years, Buddhists, Taoists, and other disciplines were at the heart of society. Calligraphy, music, medicine, attire, and much more were said to have been passed down from the heavens.

“Unfortunately, over its past 60 years of rule, the communist regime has treated traditional Chinese values?centred on the idea of harmony between heaven and earth as a threat to its existence.

“And in its systematic campaigns like the Cultural Revolution”, the website says, it has uprooted traditional beliefs and destroyed ancient treasures bringing traditional 5,000 years of civilization to the brink of extinction.”

Mrs. Casson found the digitally animated backdrops was unlike anything she had seen before.

“The special effects, where the performers jumped from the back of the stage and then went into the backdrop, that was brilliant! Really fantastic, and again, quite unexpected, to have that mix between traditional on the stage and contemporary screen … a unique blend of a current day performance.”

She praised the singers, sopranos and the tenor. Her husband told her he was surprised that her glasses hadn’t smashed “when the lady sang so wonderfully,” she said.

A presentation of contrast, in some places Mrs. Casson found the pace of the performance to be ‘quite serene.”

And the banners that were held up were a reminder “to be kind and good and to live a good, healthy, happy life,” Mrs. Casson said.

Her husband was happy to see the Chinese culture in a Western civilisation and found the colours “most striking .”

“Everything looked really perfect,” he said. “They took a lot of pride in the way they presented themselves and what they performed. It was very regimented, unique and interesting to look at.”

He said the dancers were filled with energy and very athletic.

“It’s the way they were spinning and rotating and looked very agile in the air. I liked all of that.”

He urged his friends and associates to see Shen Yun which will have shows coming up in Canberra, Sydney, Adelaide and the Gold Coast to end of April.

“It’s not always something that a lot of people can get to see… with the current [communist] regime banning that sort of performance. Even if you go to China, you wouldn’t be able to see [Shen Yun], so being exposed to the [authentic] Chinese culture is mostly what I enjoyed.”