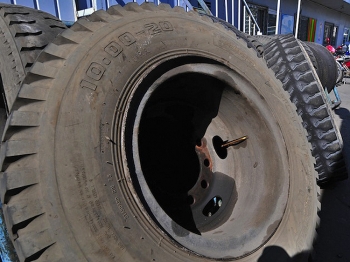 TIRED OF DUMPING: A woman walks by a rack of tires at a bus depot in Beijing, China, in this file photo. Tires imported from China have been under review by the United States International Trade Commission for punitive duties. For a product to be considered as being dumped or subsidized, the International Trade Commission determines whether the domestic industry is suffering material injury as a result of the imports of the dumped or subsidized products. (Frederic J. Brown/Getty Images )
Business & Economy

Heide B. Malhotra
View profile
Follow
biggersmaller
Print
Dumping products into the American market at prices that conceivably could bankrupt an American firm and destroy competition is a constant concern, and the United States has tools in place to combat such activities.

In international trade, the term “dumping” is generally used when a product is sold in a foreign market for less than it costs to produce it, less than it is sold in the home market, or if the respective country’s government subsidized the goods, such as by providing grants or other kinds of incentives for producing and selling the product abroad.

It should be noted that not all products sold at a lower price than a U.S. product are considered a dumped product.

“Unless the conduct falls within the legal definition of dumping as specified in U.S. law, a foreign producer selling imports at prices below those of American products is not dumping,” according to an entry on the Import Administration website.

One tool used when illegal trade activities are alleged is filing charges with the World Trade Organization (WTO), an international body that reviews rules of trade between countries.

Another tool is the United States International Trade Commission (USITC), which is an independent, nonpartisan federal agency that prides itself in sticking to the facts versus advocating policy issues.

The respective U.S. industry or firm may file “a petition with both Import Administration [IA] and the United States International Trade Commission [ITA]” if it presumes unfair competitive factors by foreign companies, according to the IA and ITA websites.

IA and the ITA must review and provide a preliminary response within 190 days for dumping charges and 130 days when a countervailing duty is alleged. But it can take up to 18 months before a final determination is made and a remedy prescribed.

The importer must post a bond or pay cash during the investigation, which would amount to the projected tax burden if found guilty as charged.

If a violation of U.S. trade laws is found, the U.S. Customs or U.S. Border Protection will impose a tax based on the dumping margin. This margin is calculated by the Department of Commerce. For example, if a dumping margin of 40 percent is assessed by Commerce, U.S. Customs will charge a tax of 40 percent of the value of the product when the product enters the United States.

When the WTO finds that dumping exists, the General Agreement on Tariff and Trade allows the victim country to take action against the country found guilty of the violation. The remedy is generally an additional tax burden on imported products.

Under the GSP program, goods from certain countries may be imported for free, reducing costs for manufacturers and consumers alike, as manufacturers can buy raw and other materials at a lesser cost, and consumers have more buying power if a product can be bought for a lower price.

“GSP extends duty-free treatment to several thousand products imported into the United States from more than two-thirds of the world’s countries,” states the Coalition for GSP on its website.

The Coalition for GSP is a program under Trade Partnership Worldwide LLC, a global trade and economics consulting firm. The Coalition consists of 177 U.S. firms and 19 U.S. associations that lobby for the GSP program, as their members derive benefits in the form of lowered import taxes.

“GSP is an important way American companies keep costs down. Large and small businesses import products duty-free under GSP,” according to the Coalition for GSP on its website.