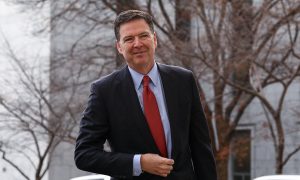 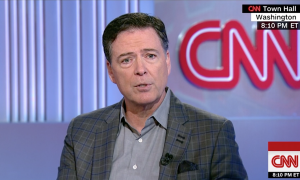 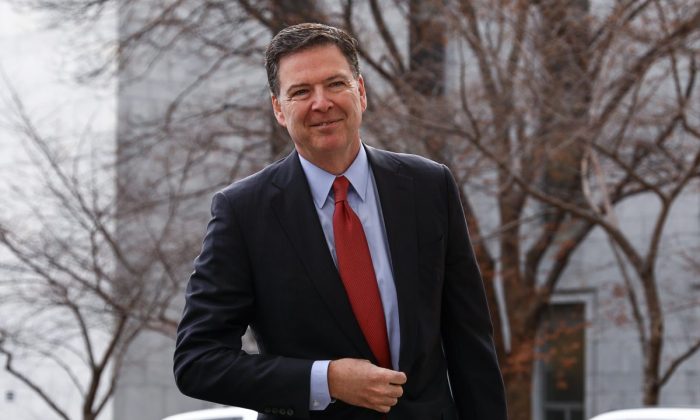 Former FBI Director James Comey gave four memos concerning his interactions with President Donald Trump to bureau agents who interviewed him at his home one month after he was fired.

The details about the memos and the interview were memorialized in six pages of FBI documents obtained by conservative watchdog group Judicial Watch on July 23.

Comey’s leak of the memos to The New York Times played a major role in triggering the appointment of special counsel Robert Mueller. The newspaper published a report on the memos on May 16, 2016. The special counsel was appointed the next day.

Depending on the classification level, storing government documents outside of approved facilities can be illegal. At least one of the memos Comey leaked contained classified information, according to lawmakers who reviewed the documents. Department of Justice Inspector General Michael Horowitz confirmed in 2018 that his office was investigating Comey for leaking classified information.

“They’re essentially FBI files. They have to stay at the FBI. It’s a pretty simple legal issue and ethical issue. And in this case they were the president’s FBI files,” said Tom Fitton the president of Judicial Watch. “It was all about getting Trump. He was willing to break the rules.”

The documents (pdf) describe an interview conducted by FBI agents at Comey’s home on June 7, 2017, nearly a month after Trump fired Comey. During the interview, the agents presented Comey with several of his memos. He told the agents that he believed that at least two memos were missing. He also pointed to the “Secret” classification marking on one of the memos and said that the document should have been marked “Unclassified.”

Comey then “voluntarily provided” the agents with four memos he had in his possession. Three of the memos were dated prior to Comey’s firing: Feb. 14, March 30, and April 11. The fourth memo was dated “last night at 6:30 p.m.” The agents stored the notes as evidence at the FBI headquarters.

Comey handed the memos over the day before he testified before the Senate Intelligence Committee on June 8, 2017. During that testimony, he told lawmakers that he leaked the memos through a “friend” to The New York Times with the intention of triggering the appointment of a special counsel.

Trump fired Comey on the advice of Deputy Attorney General Rod Rosenstein, who wrote a memo recommending the firing titled “Restoring Public Confidence in the FBI.” In the memo (pdf), Rosenstein faults Comey for usurping the attorney general by making a public statement exonerating former Secretary of State Hillary Clinton.

Comey led the FBI when the bureau investigated Clinton and the Trump campaign during the 2016 election. The lead agent in both investigations, Peter Strzok, had an intense bias against Trump and in favor of Clinton.

Mueller took over the FBI’s probe after Comey’s firing. The special counsel closed his investigation on May 29, concluding there was insufficient evidence to establish that Trump, or anyone on his campaign, colluded with Russia to influence the 2016 presidential election.

Attorney General William Barr told Congress earlier this year that spying on the Trump campaign did occur and that he has initiated an inquiry to determine if the surveillance was free of improper motive. The bureau obtained a secret court warrant in October 2016 to spy on Trump-campaign associate Carter Page. The FBI used a Clinton-funded, Russia-sourced dossier as evidence to obtain the warrant.

“James Comey is a disgrace to the FBI & will go down as the worst Director in its long and once proud history,” Trump wrote on May 9, the second anniversary of Comey’s firing.

“He brought the FBI down, almost all Republicans & Democrats thought he should be FIRED, but the FBI will regain greatness because of the great men & women who work there!”