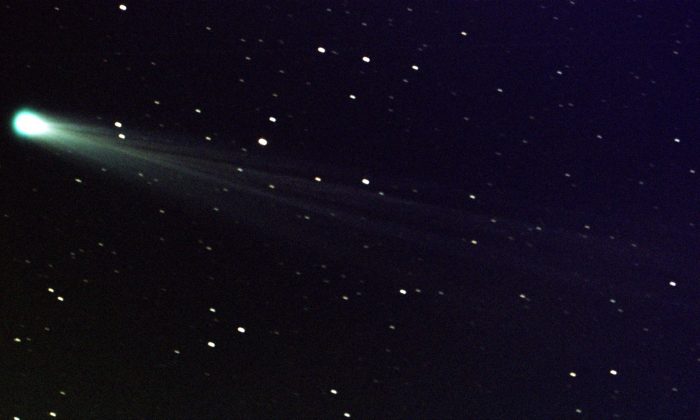 Comet ISON's tail in a November 2013 file photo. Debris from the comet before it vanished could hit Earth around January 12, 2014. (AP Photo/NASA, Aaron Kingery)
Science

Comet ISON: Is It Dead?

Comet ISON finally met the sun, and the encounter ended with a spectacular sight in the skies.

But did the comet survive the encounter?

Astronomers believe that the comet probably did not survive the encounter–and if it did it is just mostly small chunks of ice.

Karl Battams, an astrophysicist with the U.S. Naval Research Laboratory, told CNN that information from the Hubble Space Telescope or other telescopes will tell astronomers what really happened.

“It seems unlikely at this stage that anything of significant size remains but Hubble observations would help clear that up,” he said.

“Most agree that ISON was destroyed (with greater than 90% probability of this having occurred), leaving behind small (< 10 m radius) pieces of rubble, but perhaps, with maybe 10% probability of occurring, also leaving behind some important fragments 100m radius or larger, big enough to study. If previous sungrazing comets are any guides, there may be a sizeable piece of comet nucleus left. At this point, though, scientists are waiting for a variety of telescopes to make observations before the status of Comet ISON can be confirmed,” the space agency said.

“What remains of Comet ISON appears to brighten and spread out, then fade. The disappearance of a strong central brightness condensation after perihelion is telling, the comet is clearly fainter and more diffuse going out than going in, but it continues to shine. The spread out light is likely due to dust emitted in the few hours before perihelion going around the sun.”

NASA will be monitoring the comet for the next several weeks to see if there is anything sizeable left.

It also said accompanying the video it released that “The question remains as to whether the bright spot seen moving away from the sun was simply debris, or whether a small nucleus of the original ball of ice was still there. Regardless, it is likely that it is now only dust.”