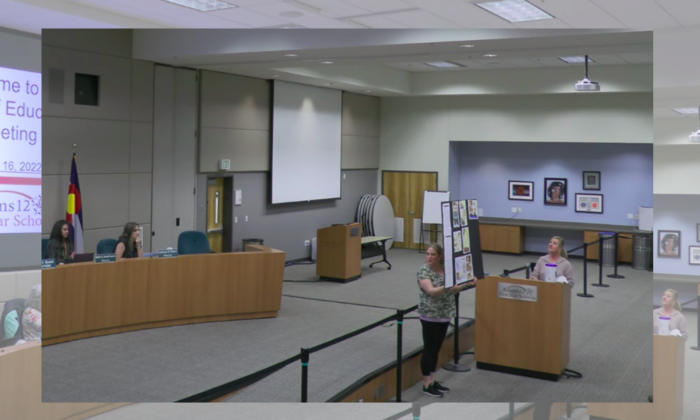 A Colorado mother was cut off at her local school board meeting after trying to read out a sexually explicit passage from a book she said was available to children in the school district.

The mother, identifying herself as D. Barnes, spoke at a March 16 school board meeting for Adams 12 Five Star Schools, which serves Denver’s northeastern outskirts. She told board members that she was “very concerned” about the material that children have access to through their schooling.

“I do not favor book banning,” she said to the audience, many of whom had spoken before her either in support or opposition to the district’s policy regarding “gender non-conforming” and transgender students. “But I do want to tell you that pornography does not belong in our schools.”

Barnes specifically took issue with two books: “Gender Queer,” a graphic novel by Maia Kobabe, and “Lawn Boy,” a young adult novel by Jonathan Evison. She said that young children have access to these titles “via online resources that Adams 12 made possible.”

“I discovered around the same age followed by the further realization that my ability to become aroused was governed by a strict law of diminishing returns, an elaborate fantasy based on Plato’s Symposium. The more I had to interact with my genitals, the less likely I was to reach a point of satisfaction. The best fantasy was one that did not require any physical touch at all.”

She then continued to read a section detailing the use of a new sex toy and various associated quotes.

It was at this point that the board decided Barnes was “out of order” and demanded she stop reading. “This is your first warning,” a board member said.

Another board member suggested restoring Barnes’s time so long as she agreed to keep the content “appropriate for K-12.” The apparent irony prompted several attendees in the audience to speak out in frustration.

“But it’s in the library. You made it appropriate,” a man yelled.

Barnes moved on to describe her feelings when she discovered “Lawn Boy” was available to high school students in the district.

“I was livid, I was angry, I was hurt that this was accessible to our children,” she said, arguing that the book should be treated the same way as “Playboy” or “Penthouse,” which don’t deserve a place in schools in the first place, she added.

The video of the four-hour meeting has been on the Adams 12’s YouTube since March, but has recently gone viral on social media after a two-minute clip of the exchange was shared by popular Twitter account LibsofTikTok.

In a statement regarding Barnes’s comments, Adams 12 said the district has just one copy of “Lawn Boy.”