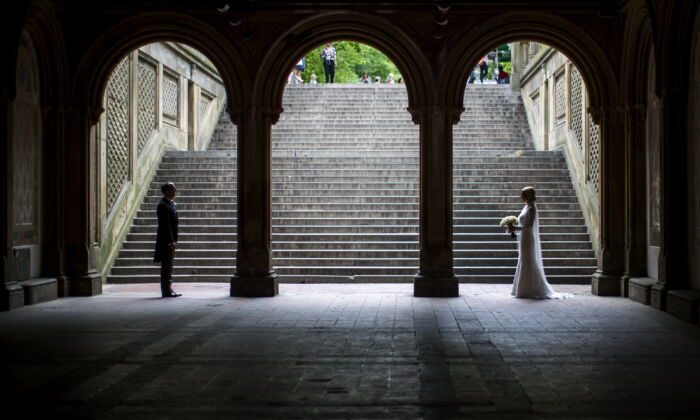 A bride and groom pose for wedding pictures at the Bethesda Terrace in New York's Central Park on May 23, 2017. (Mary Altaffer/AP Photo)
By Katie Spence

On Nov. 8, Coloradans overwhelmingly voted “yes” on Proposition FF, which expands its universal free school meals program by limiting tax deductions on earners making more than $300,000. And by doing so, Colorado voters also voted to penalize marriage, according to the nation’s leading independent tax policy nonprofit.

When Colorado passed Proposition FF or the Healthy School Meals for All ballot measure, it created a “tax cliff” that penalizes married high earners; it’s the first time Colorado has adopted such a penalty, according to Tax Foundation.

Beginning in 2023, Proposition FF limits state income tax deductions to $12,000 for single filers or $16,000 for joint filers and applies to standard or itemized deductions. That limit applies to any household making more than $300,000 per year without a higher tax bracket for marriage.

As such, if an individual makes $299,999, they’ll be able to claim total itemized deductions. But if two individuals each making $150,000, marry, their deductions will be limited under Colorado’s new law. It also means that if a couple previously claimed $50,000 in itemized deductions, their state taxes will increase by $1,547 under the measure.

Proposition FF’s passage is expected to generate an additional $100.7 million in state income tax revenue in 2023, the first year the measure takes effect.

According to the Tax Foundation, state measures such as Proposition FF are known as “marriage penalties” because they impose a higher effective tax rate on married couples who file jointly than on two single individuals with the same amount of combined income.

Additionally, marriage penalty taxes are considered a “non-neutral tax treatment” that’s peculiarly harmful to smaller businesses such as sole proprietorships, S corporations, and partnerships, as these businesses typically report income on the individual tax returns of the owners.

Arkansas, Delaware, Iowa, Mississippi, Missouri, Montana, and West Virginia, as well as the District of Columbia, also have a marriage tax penalty. However, they offset that by allowing married taxpayers to file separately on the same return.

The passage of the TCJA was considered the largest overhaul of the tax code in three decades, and many of the benefits were set up to help families. Most of those benefits for families expire in 2025.

In the past, Colorado voters have shown little desire to boost taxes. In 1992, they went so far as to establish the Taxpayers’ Bill of Rights, or TABOR, which limits the revenue governments can retain and spend and requires voter approval for tax increases. Accordingly, since TABOR’s implementation, 25 statewide ballot measures affecting taxes have been put forward for voter approval. Only six have passed.

Before its passage, proponents of Proposition FF argued that “even if a student can afford to bring or pay for a meal, the measure will take a daily financial concern off of families’ plates,” Colorado’s ballot booklet stated.

Opponents of the proposition argued that the measure saps money from the economy and families investing their money as they see fit. They also said that “the state should not pay to feed kids who can afford to purchase a school meal or bring food from home.”

Proponents of Proposition FF stated that kids experiencing hunger have “lower grades than their peers and are more likely to struggle with behavioral problems and experience emotional, mental, and physical health issues.”

That argument seemed to resonate with Colorado voters, who voted to add Proposition FF to the list of taxpayer-funded social programs.

In November 2020, Colorado voters approved a proposition, effective Jan. 1, 2023, requiring employers and employees to contribute 0.9 percent of the employee’s wage to a state-run insurance program. If an employee makes $104,000 annually, the employer and employee will pay $468 toward the insurance program for a combined total payment of $936 annually.

As a result, starting in 2024, if a Colorado employee has a medical event, they can take up to 12 weeks of paid family and medical leave and receive up to $1,100 per week in wages, depending on their salary. Anyone employed for 180 days and earning at least $2,500 qualifies so long as the organization employs at least 10 people.