They allege coverup discredited them and a GOP gubernatorial candidate 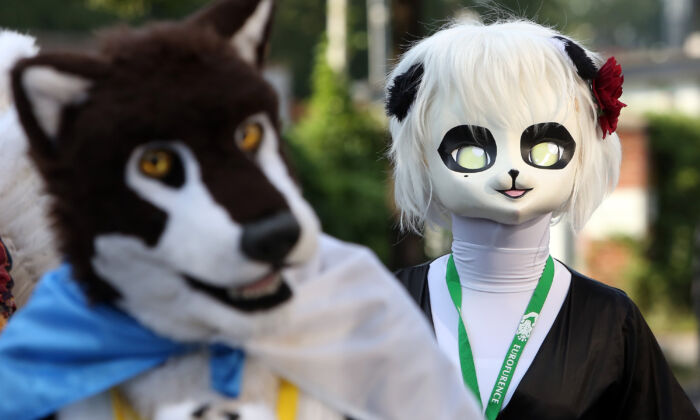 Colorado parents are accusing the state’s second-largest school district of a “furry” coverup that mocked parents and erroneously discredited a Republican gubernatorial candidate.

During her campaign, Heidi Ganahl, a Republican who unsuccessfully ran for governor, voiced concerns about the “furry” trend among students.

The controversy started on Sept. 24 when Ganahl told a local radio host about the existence of “furries” in Colorado schools. She later named Jefferson County a furry hotspot.

Furries or “animal avengers” are students who hiss and bark and claw at the air while dressed in animal tails, ears, fur gloves, or other costume attire. Furries sometimes wear collars with leashes attached, allowing themselves to be “walked” by peers.

Some mainstream media have reported the trend as a myth created by conservatives falsely raising concerns about schools. However, teachers, school administrators, and parents around the country have told The Epoch Times that the furry movement is, indeed, a growing and disturbing trend.

Ganahl told 710 KNUS radio host Jimmy Sengenberger that “not many people know that we have furries in Colorado schools—kids identifying as cats. It sounds absolutely ridiculous, but it’s happening all over Colorado, and schools are tolerating it. It’s insane.”

“We’ve got to focus on the basic blocking and tackling of teaching our kids how to read, write, and do math, and not put up with this nonsense in the classroom,” Ganahl said later on KWGN-TV Channel 2.

“I just heard from over 100 parents identifying 30 different schools that this is happening. [In] Jefferson County there’s a lot of this going on.”

The Jeffco Public School district fired back on Sept. 28 and 29 with a statement released to local news outlets saying:

“There are no litter boxes in our buildings and students are not allowed to come to school in costume. There are no furries or students identifying as such during the school day.”

Ganahl’s comments and the school district’s denial about furries were picked up by Democrats. Their comments and the resulting reaction caused a firestorm among liberal media outlets on the state and national level that smeared the claim as a right-wing conspiracy theory.

Neither parents nor Ganahl made claims of litter boxes being used by furries at schools.

School officials’ denial added the issue of litter boxes to the conversation.

Lindsay Datko, who heads the 6,000-member Jeffco Kids First watchdog group, said parents have been complaining about furries in Jefferson County schools for months. The school district lied publicly to cover up the problem, she said.

Datko proved what she knew was true by filing open records requests for emails on the matter, which are now posted on Jeffcokidsfirst.com’s site.

Multiple emails concerning disruptive furry behavior dating back to March show that school superintendent Tracy Dorland, school board president Stephanie Schooley, and other school officials and board members knew about the problem.

The district also received emails from parents complaining about the officials’ denial to media that furries were a concern.

“A child in my life felt so awkward in their neighborhood high school that allows full furry attire, especially when that furry would growl and bark at them in the hallway on a daily basis, that they decided to leave the school,” according to an Aug. 19 email from a former teacher and administrator.

In an Aug. 18 email concerning Drake Middle School, the writer noted students cheered at the announcement that the school would no longer allow ears or tails to be worn by students.

Another parent noted in an Oct. 1 email that the school district made “clearly a false statement,” and suggested the statement should be corrected with the media.

The Epoch Times contacted the district’s communications department requesting comment about the denial of the furry issue and the documents showing officials knew of complaints for months.

“We respectfully decline to comment any further on this issue,” according to an emailed statement from the district’s media relations team. “If parents have individual concerns about an unproductive learning environment or bullying in their schools, we encourage them to contact their principal and community superintendent.”

Parent Darlene Edwards said instead of denying problems at Jefferson County schools, the administration needs to address them.

“It’s definitely interesting that they’re trying to shush it under the rug. I don’t understand the motivation for that, you know—it’s a nationwide issue,” she said.

Edwards, a liberal supportive of diversity and inclusion, said this isn’t about politics. It’s about distractions that hurt a child’s ability to learn.

Her eighth-grade son, who has autism, has complained about the furries, who also go by the name “animal avengers,” at Wayne Carle Middle School, she said.

“He’s like, ‘Mom, they’re wearing collars and leashes, and they’re being walked around by other kids.'”

When her son called one of the furries “weird” for barking in class, he was the one who was reprimanded, Edwards said.

Her niece, a sixth grader at the same middle school, said furries get on all fours during recess so they can be walked on leashes by other students. Edwards said that her niece witnessed students putting their faces into food to eat, like cats or dogs do, at lunch instead of using utensils.

Datko, a former teacher with two students in the district, said furries have been reported in most of the district’s middle and high schools in the district of 69,000 students near Golden, Colorado. She added that the behavior disrupts the educational environment and intimidates other students.

She recounted a recent story from a 17-year-old, who went to turn in a chemistry assignment and was greeted at the door by furries who hissed at him. He felt uncomfortable. So, he left and had to turn in the paper late.

Datko said Jefferson County public schools are closing campuses because they have lost 5,000 students to other schooling options since the pandemic. She blames the exodus on the district’s lack of respect for parental rights.

Many parents have started homeschooling their children or have placed them in private or charter schools. She added that parents learned that schools surveyed students asking them to declare their preferred pronouns.

And administrators advised teachers to change the name of the Gender and Sexual Alliance club, so parents wouldn’t know their children were involved in an LGBT organization.

“I’ve heard from substitute teachers who will go in and say that on their roster, it says, in front of the parent, you use this name, and then to the child, you use this name. So they’re just basically deceiving parents, right and left,” Datko said.

It’s disturbing, Datko said, because preserving the family is critical to society. When schools don’t respect parents, it puts our entire society at risk, she said.

“I love public schools,” she said. “But it’s just becoming more and more clear how important choices are for parents, because they’re not being honored.”