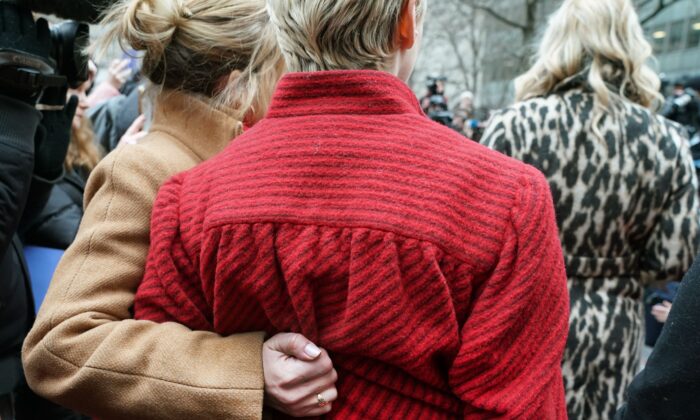 Actress Rose McCowen (in red) gathers with survivors of sexual abuse outside the courthouse after the arrival of Harvey Weinstein at the State Supreme Court in Manhattan, New York, on Jan. 6, 2020. (Timothy A. Clary/AFP via Getty Images)
US News

A Colorado board voted on Friday to no longer recognize the term “sex offender” in official documentation for people who commit sexual offenses to reflect so-called “person-first” language.

The Colorado Sex Offender Management Board (SOMB), which controls treatment standards for people convicted of sex crimes, voted 10–6 to call offenders “adults who commit sexual offenses” in its standards and guidelines for sex offenders.

“The language change applies only to the SOMB Standards; the term ‘sex offender’ will continue to be used in Colorado statute and the criminal justice system, including courts, law enforcement and the Colorado Sex Offender Registry. The name of the SOMB itself will also remain unchanged,” the board stated in an announcement.

The revision will be open to public comment for 20 days, after which the board will review public sentiment and discuss adjustments before ratifying the change during the next meeting, which is set for Dec. 17.

The SOMB is a 25-member board made up of everyone from public defenders to prosecutors, created by the Colorado General Assembly in order to establish standards for treatment and management of adult and juvenile sex offenders. Its aim is to prevent them from recommitting crimes, while enhancing protection for victims.

Treatment providers would have to follow the new guidelines when assisting sex offenders, and in other official communications. Although law enforcement and the criminal justice system do not fall within the purview of the latest language revision, some worry it’s a step in that direction.

“Referring to me by a label for something I did half my life ago is inappropriate and downright offensive,” said Derek Logue to CBS 4 Denver. He preferred to be called “client,” which was one of the five terms the board considered.

Kimberly Kline, a licensed counselor and chair of the board, told the Denver Post, “I think the biggest thing is research really shows us that assigning a label has the potential for negative effects in rehabilitation.”

Kimberly Corbin, a rape survivor, told CBS 4 Denver, “It’s very, very damaging for those who people who are labeled when it has to do with gender, race, sexuality, ability, but those are not their choices, the biggest thing for me is these are choices that sex offenders make.”

“I’m involved today after hearing that it would be improper or offensive in some manner for me to refer to the man who raped me as a sex offender,” Corbin added.

Several attempts to change official language have been made throughout the country, including a sheriff in Dane County, Wisconsin, deciding to discard the term, “inmate,” and replacing it with “residents.” Last year, lawmakers were considering removing the phrase “sexually violent predator” from statutes but eventually backed away.

The Colorado board will not drop “sex offender” from its own name as only the state Legislature has the right to change the name of the board.