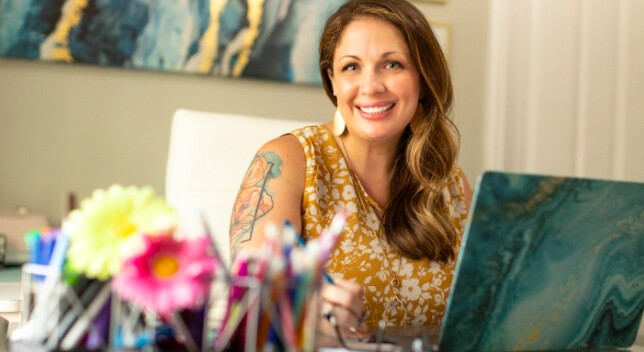 Lorie Smith, owner of 303 Creative, is a website designer seeking U.S. Supreme Court protection of her First Amendment rights. (Screen shot from the web site of the Alliance Defending Freedom)
US

Lorie Smith left the corporate world in 2012 to form her own website design firm, 303 Creative, which soon flourished. But in 2016, she was asked to create a design conveying a same-sex marriage message that violated her deeply held Christian faith.

Smith declined to do so, and when it became clear that a Colorado public accommodation law would be used to force her to create messages that she and other Coloradans didn’t support, or else face harsh penalties, she decided she had to challenge the statute.

So she turned to the federal court system to uphold her First Amendment freedoms, and, six years later, the Supreme Court will hear oral arguments in her case later this year.

Now, Smith fears for her life as she awaits the slow turning of the wheels of justice—due to continuous terrifying harassment, including death threats, from activists seeking to suppress her Christian beliefs.

Asked if she feared for her life, Smith said: “Of course. When you hear the things that I’ve heard, it’s terrifying. It definitely makes your skin crawl and the hair on your back stand up.

“My clients have been harassed, and I love all of them dearly. They’ve received threats, as well as ultimatums, which has been difficult.”

She said the ultimatums have come from “the same groups of people who have been so hateful toward me, but they took it a step further. They figured out my clients’ contact information and harassed them as well.”

Smith’s comments came on May 18 during a discussion with reporters at the Alliance Defending Freedom (ADF) headquarters in the nation’s capital. Smith is represented by ADF, an Arizona-based public interest law firm that specializes in First Amendment and religious freedom cases. Her case is 303 Creative vs. Elenis.

Kristen Waggoner, ADF’s general counsel, told reporters that Smith had to appeal her case to the Supreme Court despite multiple facts both sides of the litigation agreed on in the 10th Circuit Court of Appeals.

The 10th Circuit ruled against Smith and in favor of the Colorado Civil Rights Commission in a July 2021 decision.

Chief Judge Timothy Tymkovich dissented, calling the majority opinion “unprecedented” and “staggering” because the “Constitution protects Ms. Smith from the government telling her what to say.”

“Though I am loathe to reference Orwell, the majority’s opinion endorses substantial government interference in matters of speech, religion, and conscience,” Tymkovich said.

“Indeed, this case represents another chapter in the growing disconnect between the Constitution’s endorsement of pluralism of belief on the one hand and anti-discrimination laws’ restrictions of religious-based speech in the marketplace on the other.”

The judge was referring to George Orwell’s famous quote: “If liberty means anything at all, it means the right to tell people what they do not want to hear.” Tymkovich added the quote to his dissent text.

The first of the essential facts in the case that both sides accepted, Waggoner said, was “that Lorie’s religious beliefs are central to her identity and that she strives to glorify God in everything she does. The second is that Lorie works with people from all walks of life, including those who identify as LGBT.”

Even so, she said, “the 10th Circuit Court of Appeals held in a 2–1 decision that the government can actually compel Lorie’s speech, even though it admitted that her decisions hinge on what the message is in the speech and not the person who requests it.”

Waggoner described the decision as “absolutely unprecedented,” and said “our government’s duty is to protect freedom, not to take it away. So, if the government has the power to force Lorie to speak a message, then it can force any one of us to speak a message.”

Waggoner said she would be filing briefs to the High Court next week, and Colorado would then have several months to reply. Amicus briefs supporting Smith are due June 2. Oral arguments could come as early as October.