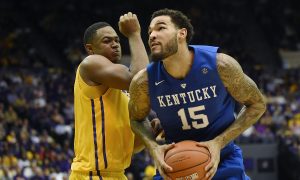 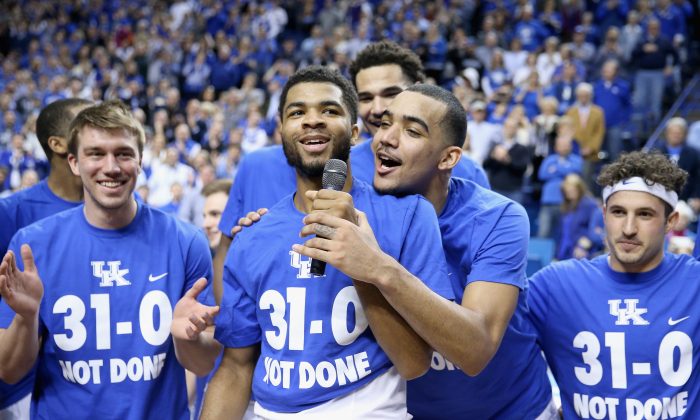 Kentucky465528280 Andrew Harrison (center-left) and Trey Lyles (center-right) of the Kentucky Wildcats have been a big part of the team's 31–0 start. (Andy Lyons/Getty Images)
College Sports

With the conclusion of the regular season the major conferences will have their tournaments this week. Should Kentucky march through the SEC tournament, as expected, it will mark the second straight season (Wichita State last year) that a team enters the NCAA tournament with a 34–0 record.

1. Kentucky (31–0). In what will be remembered as one of the most dominant regular seasons ever, the Wildcats outscored their opponents by an average of 21.2 points per game and posted double-digit wins over traditional powers Kansas (72–40), UCLA (83–44), and North Carolina (84–70). Although the SEC provided little in the way of competition, it should be entertaining to see them attempt to be the first ever 40–0 team.

2. Duke (28–3). It would be hard to find anyone who would have thought, after the the Blue Devils dismissed guard Rasheed Sulaimon on Jan. 29, that they would go 11–0 the rest of the season. At the time, Duke was just 4–3 in the ACC and already had a short bench. Just a couple days later they won at Virginia and have beaten North Carolina twice in their run.

3. Virginia (28–2). The Cavaliers have been playing without second-leading scorer Justin Anderson for the past month, but not until Saturday did it catch up with them in the loss to Louisville. Still Virginia has already clinched the outright ACC title and a two-point loss to the Cardinals likely won’t hurt their chances at getting a one-seed.

4. Arizona (28–3). Sean Miller’s Wildcats end the season on an eight-game winning streak, including the last two by an average of 30.5 points. Of their 16 conference wins, 14 were by double-digits. Meanwhile their three season losses were by a total of nine points. That kind of dominance usually pays off in getting a one-seed.

5. Villanova (29–2). Jay Wright is quietly directing the Wildcats to their best season ever. One more win and he’ll post just the second 30-win season in the program’s history—two more and they set the record. He’s done so with a balanced team—six different players average 9 points or better, led by Darrun Hilliard II’s 14.2. Their 105 points against St. John’s Saturday marked a season high.

7. Gonzaga (30–2). Gonzaga has their second 30-win season in the last three after topping San Francisco in the WCC tournament. Although Mark Few’s traditionally great squad is probably looking at a two-seed come Selection Sunday, the Bulldogs, under Few, have yet to advance past the regional semifinals in the NCAA tournament.

8. Maryland (25–5). The Terps have clinched the two-seed in the Big Ten tournament in their first year in the prestigious 14-team conference, after coming over from the ACC. They’ve done it by winning close games. All but 1 of their 13 conference wins have been by 10 points or less. Meanwhile, their five overall losses have been by an average of 15.4 points per game.

10. Louisville (24–7). The Cardinals ended a bit of an up-and-down regular season with a bang, topping mighty Virginia at home to give them a big résumé booster. After the Cardinals lost back-to-back mid-February games to unranked foes N.C. State and Syracuse, they took a tumble in the rankings but have won four out of five since then to wrap up the four-seed in the ACC.