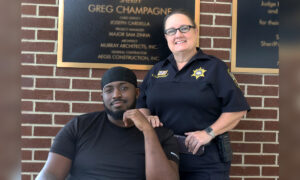 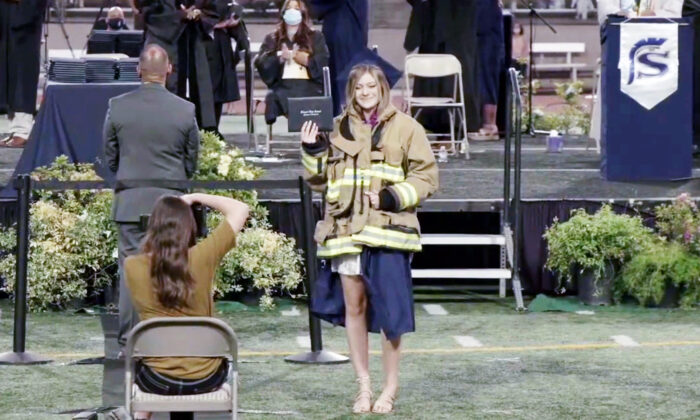 Just two days after a Los Angeles County fire specialist lost his life, his teenage daughter had to graduate from high school without the presence of her father. However, hundreds of her late father’s colleagues came forward and took part in the emotional ceremony in honor of the fallen hero.

Joslyn Carlon from Saugus High wore the jacket that belonged to her father, Tory, over her graduation gown as she accepted her diploma at the June 3 ceremony. A sheriff’s deputy, a friend of the family, took her arm as she left the stage.

“We’re here to make sure that she knows we’re all thinking about her,” said Los Angeles Fire Department (LAFD) Captain Chris Reade, according to Santa Clarita Valley’s The Signal. “We found out last night, email goes fast, and we all dropped everything we were doing in our personal lives and came down here to show our support.

“The Fire Department family is huge and strong, and [the Carlons] can come to us anytime for anything they need,” he added.

Tory, a 20-year veteran of the fire service at the age of 44, was killed by gunshot on June 1 when off-duty co-worker Jonathan Patrick Tatone targeted L.A. County’s Fire Station 81 in Agua Dulce.

A 54-year-old LAFD fire captain was also critically injured, and the gunman later drove to his own house, set it on fire, and took his life, KABC reported.

Despite the short notice, almost 300 LAFD crew members, and personnel from other departments, showed up in black uniforms to form a procession as Joslyn and her family arrived at the college of the Canyons for the Saugus High School graduation ceremony.

Fire engines filled the parking lot, and helicopters were flown over the stadium.

The crews broke into thunderous applause as Joslyn accepted her diploma, no substitute for a father’s presence but a moving show of solidarity in his absence. L.A. County Firefighters later shared photos on Facebook, thanking their “Fire Family” for showing up in full force.

Carlon was a huge part of his daughter’s life, Battalion Chief Nick Berkuta said. “And to lose, for me, a brother … this is the least that we could do to be there for her and her family.”

Fire Chief Daryl Osby described Carlon as a “brave, committed, loyal” member of the department. Firefighter-paramedic Gary Reichman also shared his condolences, adding, “To honor that beautiful girl tonight meant so much to me, to all my colleagues and my friends.”

Carlon is survived by his wife, Heidi, and three children. A family friend set up a GoFundMe page, raising over $280,000 to help the family with ongoing expenses as they come to terms with their immense loss.