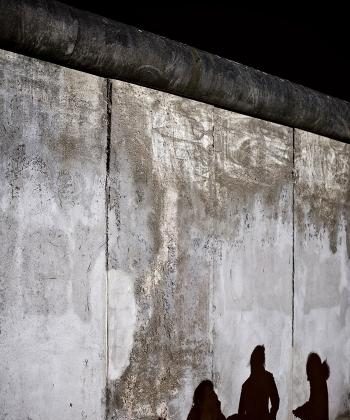 The shadows from a group of tourists are cast onto an original section of the Berlin Wall in Bernauer Strasse, central Berlin, on Nov. 8. (Leon Neal/AFP/Getty Images)
Opinion

Collapse of Communism Started in Poland

Twenty years ago today the Berlin Wall, the symbol of the Iron Curtain dividing the world into two blocs: the free world and the communist bloc, was dismantled by a spontaneous act of the people living in East Germany, ruled at that time by the communist regime.

This long-awaited act was a realization of the East Germans’ longing to be freed from the attempts to control their thoughts, the restrictions prohibiting them from moving freely between the two parts of Berlin, the ban on free speech, and the ban on the free exchange of ideas, views and opinions.

The Berlin Wall that stood for over 28 years as a symbol of horror, as a warning to those who dared to dream about freedom, the Wall stained with the blood of those who had the courage to climb it in their desperate quest for freedom, disintegrated within a few months. What events led to this act?

The first symbolic crack in the Berlin wall appeared when the agreement was reached granting the Polish workers the right to form the first trade union independent of a communist regime behind the Iron Curtain. The agreement was signed in the Gdansk Shipyard in Poland on Aug. 31, 1980, ending a peaceful strike of 17,000 shipyard workers.

Since the establishment of communism in Eastern Europe, people oppressed by the communist regimes had tried to rise up against their oppressors. Their heroic efforts had been suppressed by regimes using military force or riot police. The strike of the ship builders in Poland in August 1980 was the first successful action to resist a communist regime in Eastern Europe.

The Polish opposition developed after the end of the Stalinist era in 1956. The intellectuals formed underground groups to research ways to liberate the society from communist oppression, to publish clandestine bulletins and newspapers providing information about the facts distorted or hidden by the communist propaganda, and to establish their political program. Despite the danger of imprisonment and persecution the ranks of the opposition grew. Their work laid the groundwork for the success of the strike in 1980.

Another factor contributing to the strike’s success was the strength of religious faith in Polish society. The communists were never able to eradicate it. The election in 1978 of John Paul II, the Polish Karol Józef Wojtyla, strengthened even more the faith of the Polish people and gave them hope and courage. The Pope’s visit to Poland in 1979 and his famous words “Do not be afraid” united the Polish people and uplifted their spirits.

Since the establishment of communism there had been several mass protests, strikes, and demonstrations initiated by the Polish people against the communist regime. They were all violently suppressed, however, and ended in bloodshed.

An example of such an action was the strike in Gdansk in 1970, where workers took to the streets and the strike developed into clashes with police. As a result several workers were killed or injured. People learned from this experience that the best weapon against well-trained and armed special police squads and military force is a peaceful strike confined to the factory premises.

A few weeks after the victory in Gdansk a nationwide independent self-governing Trade Union named Solidarity was founded. It grew quickly and the number of its members was estimated at 8 million. It became more than just a trade union. It became also a social movement that united the entire society and gradually started to get involved in political issues.

But the communist regime did not give up. Shortly after signing the agreement with the Gdansk yard ship workers in 1980 the Communist Party authorities started preparing to impose martial law in Poland.

The relationship between the authorities and Solidarity gradually became tense. The turning point was an event that occurred in the Polish city of Bydgoszcz. Polish peasants also wanted to establish their own independent self-governing Trade Union of Individual Farmers. The communist authorities refused to legalize their organization. The peasants in Bydgoszcz proclaimed a strike in the premises of the farmer’s organization controlled by the Party. Thus a conflict started.

Solidarity representatives Jan Rulewski and Mariusz Labentowicz together with a representative of the new independent Trade Union of Farmers, Michal Bartoszcze, attended the session of the province council in order to present the situation of the individual farmers. In the middle of the session the chairman and some council members decided to close the session and left the premises. A special police squad broke into the building and brutally beat the Solidarity activists, who had to be taken to a hospital for injuries sustained.

The Communist regime completed preparations for imposing martial law and was waiting for the occasion to strike hard and crush the Solidarity movement. Quotes taken out of context from speeches obtained through electronic surveillance at a Solidarity board meeting were used a pretext.

Martial law was introduced in Poland on Dec. 13, 1981 and thousands of Solidarity activists were arrested and detained without charge. Some activists were killed. The civil liberties of the people were drastically restricted.

Although feeling helpless, the Polish people demonstrated where they stood. After the introduction of martial law the popularity of the Polish communist party (Polish United Workers' Party) went down. 850 thousand Party members disappointed with the communist government renounced their membership. Among them were 36 percent of factory workers. Many members publicly threw away their Party membership books and participated in strikes and protests. Martial law was lifted in July 1983.

Solidarity always declared its willingness to resume talks with the communist regime even when its organization was banned during the martial law years. However the talks did not start until February 1989. In April 1989 a Round Table compromise was reached to allow for half of Parliament and all of the Senate to be elected by democratic means. The election held on June 4, 1989 sent a shock wave through the communist authorities. The Solidarity candidates won all the Parliament seats available to them, including the entire Senate.

That event paved the road for the collapse of communism in other countries of the Eastern Bloc, leading to the fall of the infamous Berlin Wall.