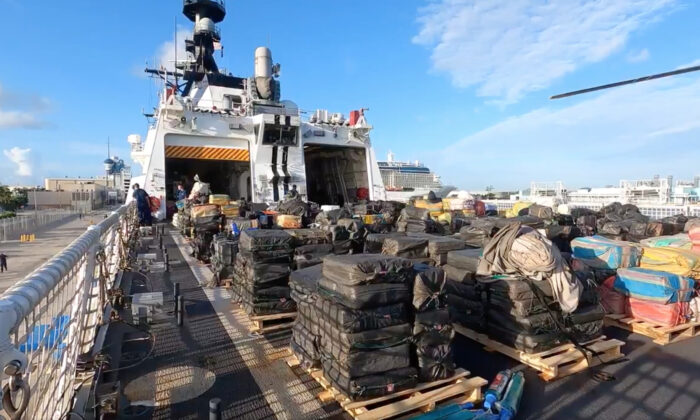 A Coast Guard vessel offloaded the largest single haul of interdicted illegal drugs worth more than $1.4 billion on Thursday in Port Everglades, Florida.

Coast Guard Cutter James offloaded around 59,700 pounds of cocaine and 1,430 pounds of marijuana, the largest single haul in Coast Guard history, according to the agency.

The drugs are the result of 27 interdictions of drug smuggling vessels performed by 10 American, Dutch and Canadian ships.

“Today’s offload is a result of our combined efforts of our inter-agency partners and a dedicated international coalition,” Vice Adm. Steven Poulin said in a statement.

Poulin praised the Canadian Defence forces, which were involved in the operation.

“Together we will disrupt, defeat and degrade transnational organized crime. We will strengthen our efforts and continue to build collaboration and capability,” Poulin said.

The interdictions took place “off the coasts of Mexico, Central and South America, and the Caribbean Sea,” the Coast Guard said.

#BREAKING @USCG Cutter James, @RoyalCanNavy Shawinigan crews offloaded approximately 59,700 lbs of cocaine and 1,430 pounds of marijuana worth more than $1.4 billion, Thursday, at @PortEverglades, which is the largest offload in #CoastGuard history. More to come. pic.twitter.com/k7KuDBqkTM

The Coast Guard performs the boardings of the suspected vessels. Other agencies and international partners are involved in monitoring the vessels and prosecuting the smugglers.

“Canada and America are committed to expanding cooperation on defending North America against illicit trafficking and transnational crime and working together within our alliances,” Maj. Gen. Paul Ormsby, a Canadian defense attache, said in a statement.

“We know that no nation can do it alone, and we know that we are stronger together. The kind of cooperation that we see on the pier today is one of the thousands of impressive examples of cooperation every day.”