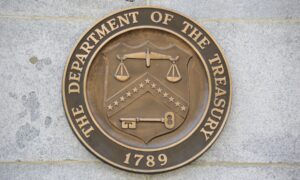 The White House has confirmed that it is suspending the press pass of CNN’s White House correspondent, Jim Acosta, after he refused to release a microphone he was holding during a post-midterms press conference on Nov. 7.

White House Press Secretary Sarah Sanders made the announcement on Twitter the evening of Nov. 7. Her statement read, “As a result of today’s incident, the White House is suspending the hard pass of the reporter involved until further notice.”

During the press conference, President Donald Trump spent an hour and a half answering questions from the press. Sanders said in her statement that Trump had answered 68 questions from 35 different reporters, including several from Acosta.

Sanders said that Trump’s record shows that he has given more access to the press than any other President in history.

About Acosta’s suspension, Sanders said: “President Trump believes in a free press and expects and welcomes tough questions of him and his Administration” but that the White House would not tolerate “disrespectful” conduct from members of the press.

She added that Acosta’s “placing his hands on a young woman just trying to do her job as a White House intern” was “absolutely unacceptable” conduct, and that Acosta’s refusal to release the microphone to other members of the press was disrespectful as his colleagues would have less time to ask the President their own questions.

This conduct is absolutely unacceptable. It is also completely disrespectful to the reporter’s colleagues not to allow them an opportunity to ask a question. President Trump has given the press more access than any President in history.

Shortly after the announcement, CNN voiced its support for Acosta and said in a statement that, in their opinion, Acosta’s suspension “was done in retaliation for his challenging questions at today’s press conference.”

Acosta first questioned the President on why he had referred to the migrant caravan as an “invasion.”

“As you know, Mr. President, the caravan was not an invasion. It’s a group of migrants moving up from Central America towards the border with the U.S.,” Acosta said. He then continued to ask the President, “Why did you characterize it as such?”

Trump told Acosta plainly, “Because I consider it an invasion. You and I have a difference of opinion.”

Acosta told the President that his opinion was an act of demonizing immigrants right before the midterm elections, to which Trump responded, “I want them [immigrants] to come into the country, but they have to come in legally … I want it to be a process.

“And I want people to come in. We need the people,” Trump said.

Acosta then made another statement referring to a Republican campaign ad that showed footage of migrants tearing down fences at the Guatemala-Mexico border. He said the ad did not show an “invasion” as it was something “happening hundreds of miles away.”

At this point, Trump responded to Acosta’s statements, “I think you should let me run the country, you run CNN.”

After more than a minute of dialogue with the President, Acosta tried to ask another question, at which point Trump said that Acosta’s time was up. “That’s enough.”

As the President tried to move on to the next member of the press, a White House aide gestured twice for Acosta to release the microphone. When he ignored her, the aide moved in to take the microphone. That is when Acosta made physical contact with the aide and pulled the microphone firmly to his body, pushing down on her arm as she tried to give the mic to another person.

Trump asked him to sit down multiple times but Acosta kept speaking. Trump stepped away from the lectern before coming back to slam Acosta, who was still talking. “I tell you what, CNN should be ashamed of itself having you working for them,” the president said, shaking a finger at Acosta.

The exchange set off a furor among political reporters and websites, with some saying that Acosta stood up to the president while others decried his apparent lack of manners.

Acosta continued to fuel criticism of the President on Twitter throughout Wednesday, tweeting that Trump sounded “depressed and despondent” at the press conference, when in fact Trump appeared upbeat about the results of the midterms and ready to work with the Democrat-controlled Congress. Acosta also claimed Trump sounded “aggrieved” and said Trump is “dishonest.”

GOP Chairwoman Ronna McDaniel, who was in attendance at the press conference, later tweeted, “We all value a free press, but it’s unfortunate that some reporters seem more interested in getting their own cable show than doing their jobs. The media grandstanding has gone overboard.”

During the same press conference, the President also voiced his disapproval of other reporters.

Trump told one reporter, Urban Radio’s April Ryan, “Sit down please. Sit down. I didn’t call on you,” when Ryan tried to interject their questions without being called upon.

“I’m talking to this gentleman. Would you please sit down,” Trump said. “It’s such a hostile media. It’s so sad.”

He also told another reporter, Yamiche Alcindor, a White House correspondent for the PBS NewsHour, that she had asked him a “racist question.”

Alcindor had asked the President if his use of the word “nationalism” at several rallies was meant to embolden “white nationalism.”

Trump said that his use of “nationalism” is about his “America First” policies such as tougher trade measures, strengthening the border, and matters of national security.

“I love our country,” Trump told Alcindor. “You have nationalists. You have globalists. I also love the world and don’t mind helping the world, but we have to straighten out our country first.”