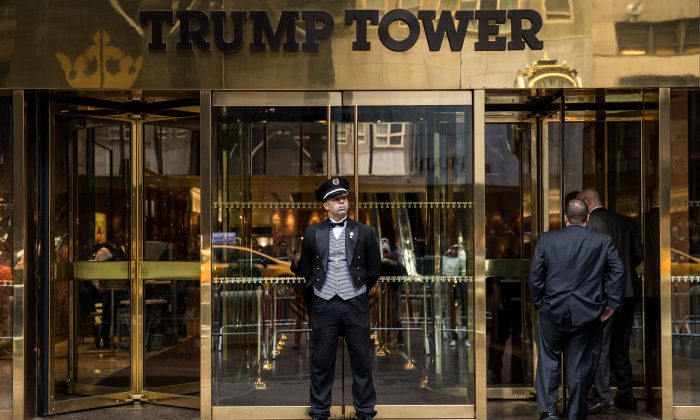 The entrance to the Trump Tower on Fifth Avenue in New York on March 7, 2017. (Drew Angerer/Getty Images)
Viewpoints

On July 27, CNN aired a news story in which it claimed President Donald Trump had advance knowledge of the meeting at Trump Tower between members of his campaign team and two Russians working with Fusion GPS. Despite the fact Trump has repeatedly stated that he didn’t know about this meeting until after it had occurred, two anonymous sources assured CNN that former Trump lawyer Michael Cohen personally witnessed the then-candidate for the presidency being told the details about the forthcoming meeting. The two sources went on to claim that Cohen wanted to make this assertion to special counsel Robert Mueller.

So excited was the mainstream media by this anonymously sourced story that it dominated the headlines for days. Trump was caught now! Soon, Mueller would have Cohen under oath before a grand jury, and then Trump’s collusion with the two Russians at the Trump Tower meeting, Natalia Veselnitskaya and Rinat Akhmetshin, would be fully exposed!

Never mind the fact that by this point, it’s been revealed these two Russian lobbyists were affiliated with Fusion GPS, the same research firm that produced the Steele dossier, which had sent them to this meeting to lobby Trump’s team against the Magnitsky Act sanctions.

There has been a very interesting development in this story since CNN published their article.

Michael Cohen’s lawyer, longtime Clinton associate Lanny Davis, outed himself publicly as one of the anonymous sources for the story, and recanted. He did this live on camera during a television interview with Anderson Cooper … on CNN.

In fact, it now looks as if Davis is making an apology tour, since, in just the past three days, he’s recanted both the Trump Tower story and another story for which it appears he was a key anonymous source.

Davis has gone on to recant a story in which he claimed Trump also had advance knowledge of the Russian hacking of Democratic emails. Davis had claimed this was another thing that Cohen looked forward to telling Mueller.

And it gets worse. Just as several media outlets began driving a new narrative based on leaks that claim Mueller’s special counsel team has “evidence” that places Cohen in Prague in 2016, here came Davis in several televised interviews to categorically state Cohen had never been to Prague, and not only that, all the other allegations about his client that appear in Christopher Steele’s dossier are also not true.

If you are counting, that’s three major narratives the mainstream media have been pushing hard that Davis has called into question in just one week.

Even more problematic for CNN: In its report on the Trump Tower meeting, the network stated that Davis refused to comment on the story when CNN gave him a chance to respond to … himself. It stated, “Contacted by CNN, one of Cohen’s lawyers, Lanny Davis, declined to comment.”

Got that? The guy who gave CNN this “scoop” off the record about Trump knowing the Trump Tower meeting was going to happen was asked by CNN for comment on the story, and he declined to respond to himself on the record. You can’t make it up at this point.

While Davis has publicly apologized several times over the last few days for misleading the reporters in several news stories for which he was an anonymous source, the response CNN has made to this has been truly astonishing.

CNN has yet to issue a retraction or even a correction of the original story. It has updated the false story only once at this point, on the same day the article went up, to add in a few quotes from President Trump and his lawyer, Rudy Guiliani.

The Daily Caller’s news editor, Amber Athey, best summed up the problem with this Aug. 27 tweet:

“CNN can resort to the ‘we’re just reporting on what sources claimed’ defense, but that doesn’t explain why they haven’t reported on or updated with the additional information that calls into serious question what those sources claimed.”

CNN can resort to the "we're just reporting on what sources claimed" defense, but that doesn't explain why they haven't reported on or updated with the additional information that calls into serious question what those sources claimed.

As Chuck Ross, reporter for The Daily Caller, and others have noted with some bemusement, CNN not only will not correct the record, they are actually embargoing any mention of Davis’s public recantation—the one he made on air on their own network.

At the very least, CNN should write a news story acknowledging Lanny Davis' recent statements and all of the new questions raised about their July 27 report. https://t.co/spJ8dzcUax

The television news channel won’t even acknowledge that Davis has changed his tune. Brian Stelter, the host of the CNN program “Reliable Sources,” defiantly stated that CNN was standing behind its reporting on the Trump Tower story despite Davis’s retraction.

Re: CNN's July 27 story about Cohen claiming that Trump knew in advance about the Trump Tower meeting: "We stand by our story, and are confident in our reporting of it." https://t.co/TOMJuQDbrp

This “news” network is so desperate for some kind of payoff to their two-year-long pushing of the Trump–Russia narrative that they can’t let go of their last shred of hope. They want to believe Trump knew about this meeting at Trump Tower, so they’ll stand by the story even after their main source admits he lied to them. This isn’t journalism—this is fanaticism.

CNN should be commended for at last dropping its mask and ending the charade of being any kind of objective, neutral news organization. It’s a propaganda arm of the Democratic National Committee, nothing more.

When a major source you used for a news story later recants what they told you, journalistic ethics should compel you to note this development in your further reporting on that story.

That is, if you have any journalistic ethics. And it’s becoming increasingly clear that CNN does not.

If you enjoyed reading this article, subscribe today at ReadEpoch.com