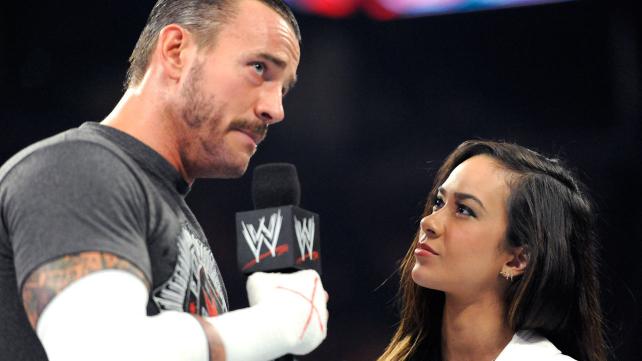 CM Punk gave another interview with Colt Cabana this week, touching on how he feels about fans chanting his name while he’s not in the WWE.

“Does it bother me just because people are randomly chanting ‘CM Punk’? Would that bother anybody? I mean, it’s weird because they do, I think they do it in two cases: They do it when they see Ape, who is my wife, AJ,” he said, per CageSideSeats.

“They seem to chant my name at her. When I say, or I guess I just said earlier that I haven’t watched wrestling in three years, it’s true. After I re-signed, I didn’t watch anything. I used to be that guy that watches everything and analyzes everything. I would watch all the live shows but I wouldn’t go back and watch anything, especially anything I did. I ceased watching any of my stuff, I just didn’t have the stomach for it anymore.”

Punk said that while AJ is out, “chant her name,” not his.

“There’s a bunch of people that will chant when there’s something that is just awful and I see both sides of the argument,” he said.

“I see the people who are like ‘don’t chant that guy’s name’ and obviously prior to us doing last week’s podcast it was like ‘he abandoned us, don’t chant, he’s a traitor’ which is fucking weird. I don’t get [expletive] mad at the kid at Whole Foods who I said ‘hi’ to every day and then he quit. I didn’t chase him down at Jewel to be like ‘you quit Whole Foods, you bastard, you traitor.’ It’s just bizarre to me.”

Punk also slammed WWE CEO Vince McMahon’s comments. “I hope that one day, we’ll be able to get back together soon,” McMahon said earlier this week on Steve Austin’s show.

“It’s way too [expletive] early, I have no interest in [expletive] going back,” Punk said, via Fox Sports. “The difference in my appearance, my mental stability, everything across the board, now from 9 or 10 months ago, is so drastically different.”

Punk also didn’t accept McMahon’s apology for the company sending him a letter of termination, he alleged, on his wedding day.

Punk continued, “I don’t want to hear ‘It was a coincidence, the lawyers didn’t talk to talent relations.’ … My wife asked for that time off so she could a) get married and b) go on her honeymoon. … They knew. If the apology was sincere, you wouldn’t use it as a publicity stunt on Austin’s podcast. You have my phone number, you have my address, you could text, you could call…”